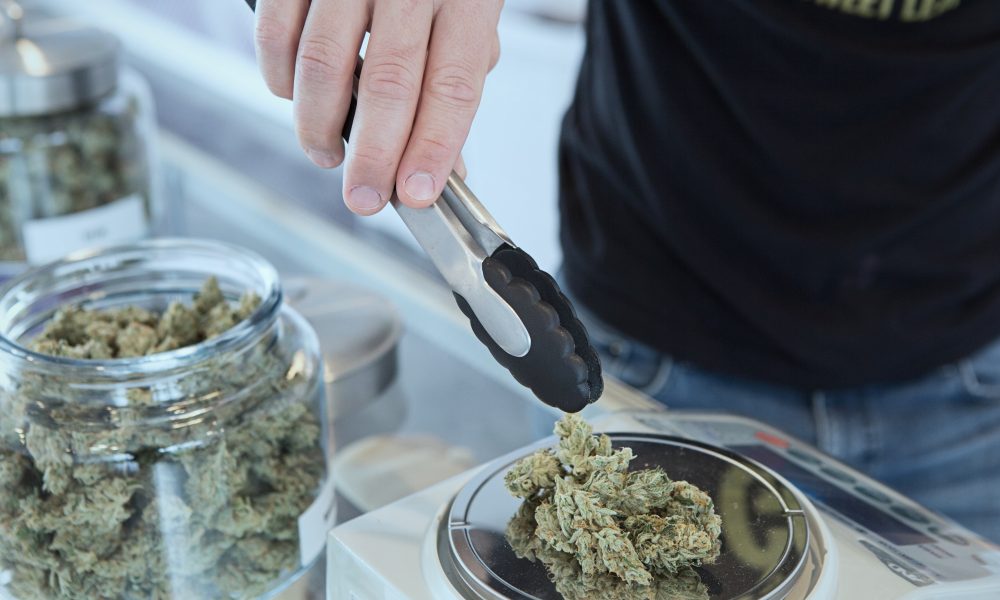 Gov. Dan McKee (D) and the state Department of Business Regulation (DBR) announced last week that the “hybrid” medical-recreational shops would be opening at the start of the month. The governor signed legalization into law in May.

#WATCH: Recreational marijuana is officially for sale in Rhode Island and 12 News was able to see the first purchase!

One of the first sales took place at the Slater Compassion Center, where the 96-year-old father of the dispensary owner purchased infused coconut macaroons and a cookie.

Joe Maraia, 96, grandfather of the CEO at the Slater Compassion Center, bought $40 in coconut macaroons and a cookie as RI begins legalize cannabis sales. Says he plans to sample later with coffee and has not previously used marijuana pic.twitter.com/nz7EaPcjYT

State Sen. Josh Miller (D), who championed legalization in the legislature, said at a dispensary on Thursday that “it’s been a long road, and I hope it works for Rhode Island because we’ve been losing out to other states for quite a while now.”

“I think it’s important for Rhode Island to make its mark in the industry,” he said.

Another lawmaker, Rep. David Morales (D), shared information for residents about the basics of the state’s cannabis law.

With the sale of recreational cannabis starting today, it’s important to note the following information related to possession, worker’s rights, and expungement!

During the election earlier this month, Rhode Island voters in more than 30 cities were asked to decide on whether or not to allow cannabis businesses to operate within their jurisdictions. Almost all of those cities opted in to marijuana commerce.

Rhode Island cities that didn’t place the question on the ballot will allow marijuana marketplaces in their area. Some of the state’s largest cities—including Cranston, Pawtucket, Providence and Warwick—declined to ask voters to decide on the matter, meaning retailers will be permitted by default.

The first five dispensaries that received hybrid licenses are:

McKee has yet to appoint commissioners to oversee the regulation of the adult-use market. Legislative leaders have made recommendations to the governor for those appointments, but nobody has been formally selected yet.

Adding to the difficulty of getting the Cannabis Control Commission together, there have been calls for the governor to reject recommended appointees from House Speaker Joseph Shekarchi (D) after one of his top aides was recently accused of failing to disclose that he was a “silent” partner in a marijuana business, while also reportedly having ties to an alleged mob figure. That staffer has since resigned.

Meanwhile, before the shops opened on Thursday, adults 21 and older were already allowed to legally possess up to one ounce of cannabis and grow up to six plants for personal use, only three of which can be mature, under the law signed by the governor.

There were months of negotiations between lawmakers, advocates, stakeholders and the governor’s office before a revised version of the legislation was introduced in May. But once the text was released, the identical companion bills in both chambers quickly advanced through committee and were quickly approved on the floor.

McKee, who released his own reform plan as part of his budget proposal this year, signed the measure just one day after the legislature sent it to his desk.

The primary components of the now-enacted law are largely consistent with an earlier version of the bill as introduced and considered during earlier committee hearings in March.

Both the governor and legislative leaders’ legalization plans were notably different than the proposal that former Gov. Gina Raimondo (D) had included in her budget in 2020. Prior to leaving office to join the Biden administration as commerce secretary, she called for legalization through a state-run model.

Meanwhile, Rhode Island lawmakers introduced a pair of drug decriminalization bills in March—including one focused on psilocybin and buprenorphine that would authorize doctors to prescribe the psychedelic mushroom.

Last year, the governor also signed a historic bill to allow safe consumption sites where people could use illicit drugs under medical supervision and receive resources to enter treatment.

The Senate Judiciary Committee also held a hearing last year on legislation that would end criminal penalties for possessing small amounts of drugs and replace them with a $100 fine.

Authorities search for suspect after OKC metro break-ins, including at marijuana grow