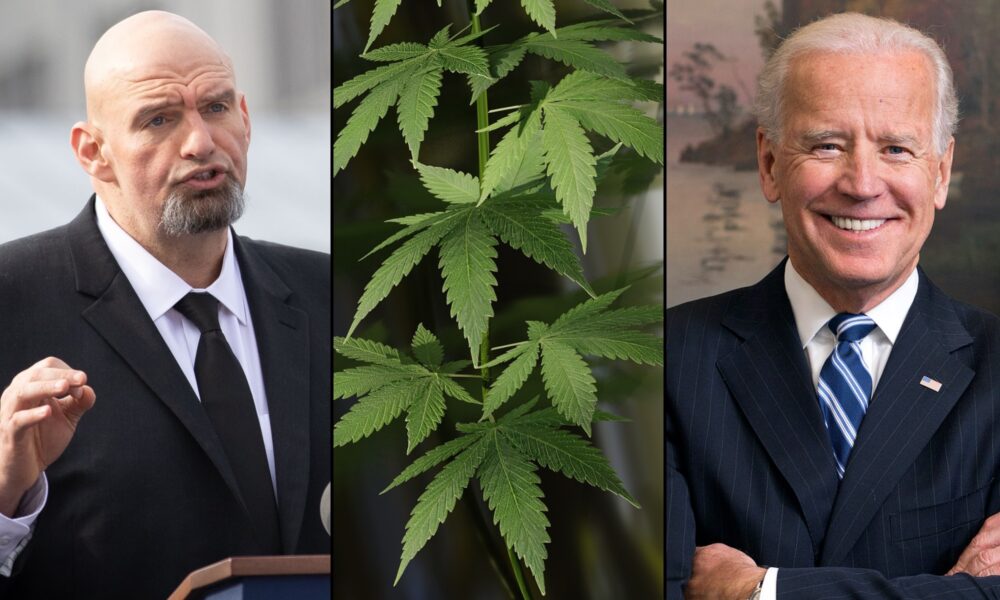 During an hour-long roundtable discussion with the PennLive editorial board on Wednesday, the U.S. Senate candidate pointed out that the president took the clemency action less than two weeks after the two discussed a Pennsylvania state-level pardon program that saw more than 3,500 people apply for relief from the governor.

Watch Fetterman discuss cannabis policy, starting around 40:25 into the video below:

Fetterman, who is running against anti-legalization GOP nominee Mehmet Oz, said that he asked Biden during last month’s Labor Day meeting whether “we could do this nationally,” referring to the Pennsylvania pardon program. And the president indicated that he was “open to that” following their conversation.

“Then, about 10 days ago, they enacted [the federal pardons] which again, could change thousands of lives in the United States, and moving us away from criminalizing it and moving towards not allowing people to [have] a criminal record for their own lives for just using a plant,” he said.

Just finished an hour-long endorsement interview with the @PennLive editorial board – you can watch the whole thing below. Dr. Oz skipped it.

I had a stroke, and I showed up. What’s your excuse @DrOz?https://t.co/EUvu2ay5C2

Fetterman was also asked by a member of the editorial board about his views on drugs beyond cannabis. He said that he’s never advocated for legalizing “hard substances” like heroin, but he maintained that people shouldn’t be criminalized over substance misuse.

“I’ve always made the argument that we cannot arrest our way out of addiction. We can’t criminalize addiction,” he said. “That is a disease.”

In fact, Fetterman’s campaign has been somewhat unclear on his stance on broader drug decriminalization.

In 2015, he told The Nation that he’s “pro legalizing marijuana, but I go even further than some of my colleagues because I’m for decriminalizing across the board.”

“I see it as a public-health issue, not a criminal issue,” he said at the time.

But a Fetterman spokesperson told the Philadelphia Inquirer last month that “John does not support decriminalizing all drugs including heroin, methamphetamines and other hard drugs.”

The application window for the expedited relief program, which was facilitated by the state Board of Pardons (BOP), closed last week.

The lieutenant governor told Marijuana Moment in a statement last week that the board is “thankful for everyone who applied, and hopeful for better lives for those whose pardons are granted.”

“While this effort reached a small portion of people affected by marijuana prohibition, the only lasting relief will come when our Republican legislature finally decides to do the right thing and legalize it,” he said.

A poll released last month found that two in three Pennsylvania voters say they support marijuana legalization, which should be welcome news for Fetterman as his GOP Senate opponent levies attacks over the candidate’s support for drug policy reform.

Oz has criticized his opponent’s drug policy positions despite calling marijuana “one of the most underused tools in America” in 2020 and saying that the country should “completely change our policy on marijuana.”

Last month, Oz again took aim at his U.S. Senate opponent over his support for marijuana legalization—but, after being pressed on his past comments on the issue, he conceded that, yes, he’s personally in favor of medical cannabis, saying that it’s a “safer solution” compared to certain prescription drugs like opioids.

Fetterman critics, including far-right provocateur Ann Coulter and former U.S. House Speaker New Gingrich, have also taken issue with a cannabis-themed flag that the lieutenant governor hung over his office balcony in Harrisburg. (Coulter falsely suggested that Fetterman deleted a tweet showing him holding the flag in a recent blog post.)

Prior to Wolf endorsing marijuana legalization, Fetterman also led a statewide listening tour to hear what residents had to say about the policy proposal. He touted his role in that tour on his Senate campaign website.

He also talked about his work to “legalize weed for jobs, justice, veterans, farmers and revenue” in a fundraising email early this year.

Fetterman previously said that farmers in his state could grow better marijuana than people in New Jersey—and that was one reason why Pennsylvania should expeditiously reform its cannabis laws.

In 2020, he hosted a virtual forum where he got advice on how to effectively implement a cannabis system from the lieutenant governors of Illinois and Michigan, which have enacted legalization.

The governor, who signed a medical cannabis expansion bill last year, has repeatedly called for legalization and pressured the Republican-controlled legislature to pursue the reform since coming out in favor of the policy in 2019.

Last year, Wolf pardoned a doctor who was arrested, prosecuted and jailed for growing marijuana that he used to provide relief for his dying wife. That marked his 96th pardon for people with cannabis convictions through an ongoing Expedited Review Program for Non-Violent Marijuana-Related Offenses.

What does Biden's marijuana pardon mean for you? Lawyer explains