How does cannabis affect sleep and dreaming? | Turn 420 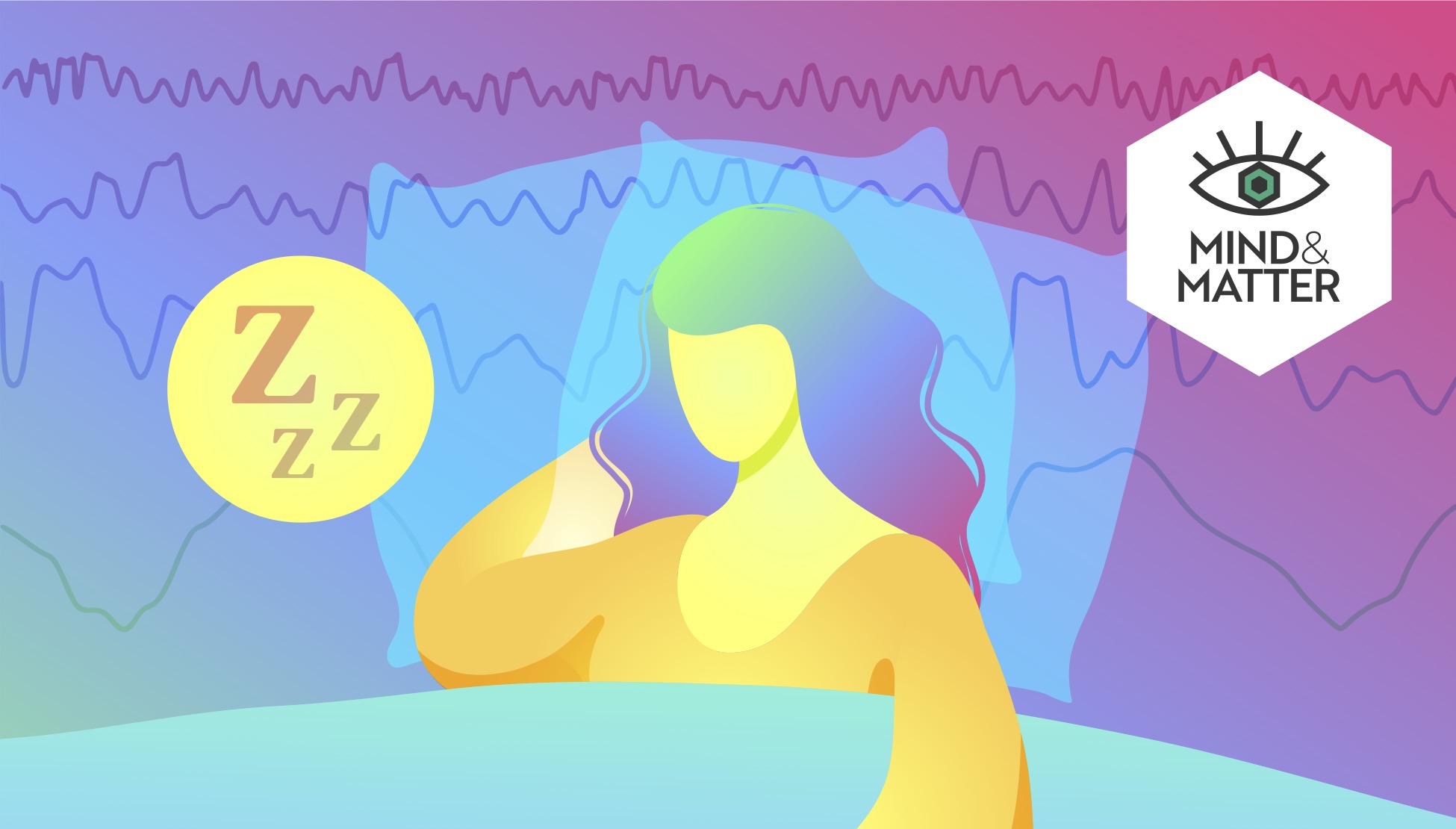 ‘Mind & Matter’ is a monthly column by Nick Jikomes, PhD, Leafly’s Director of Science and Innovation.

Many cannabis consumers report that cannabis helps them with sleep issues, or that consumption of high-THC cannabis makes them sleepy. Many chronic consumers of high-THC cannabis report sleep disturbances and especially vivid dreams for some time upon abstention (taking a “THC break”). Many anecdotes, patient surveys, and studies indicate that cannabis seems to influence sleep and dreaming, but there are many factors involved: dose, frequency of consumption, tolerance, age, sex, etc.

What do we specifically know about how cannabis influences sleep and dreaming?

Because high-THC products dominate the commercial marketplace and THC has the clearest connection to sleep among the cannabinoids, we will focus on what some of the latest scientific studies are revealing about THC’s influence on sleep. Before doing that, we will get a basic understanding about the biological functions of sleep, sleep architecture. From there, we will be in a good position to understand what is known about how THC impacts sleep.

Why do we sleep?

Sleep is still mysterious in many ways. Scientists still debate exactly how and why sleep serves its recuperative function, as well as how different phases of sleep contribute to this.

But it’s obvious that sleep is essential for life. We all feel this intuitively every time we’re tired, and it’s long been known that depriving animals of sleep can kill them faster than depriving them of food.

Sleep performs certain “housekeeping” functions—literally cleaning up physical junk that accumulates throughout waking hours. It’s also critical for learning and memory. The details are still being worked out, but it’s clear that sleep is an important regulator of the mechanisms of neuroplasticity required for properly ingesting, remembering, and consolidating the information we imbibe while awake. The details beyond the scope of this article, but you can learn more in M&M #16 with sleep expert Dr. Bob Stickgold.

Sleep is not homogenous. There are different phases of sleep, each characterized by distinct patterns of brain activity. Sleep scientists measure and classify these phases using EEG, a technique which quantifies the various brain waves present at any given moment. By studying these, scientists can discern different “brain states”–active waking (e.g. focused on a task), quiet waking (e.g. daydreaming), deep sleep, vivid dreaming, and so on.

Imagine staring at a pond. By noticing the pattern of ripples present in surface water, you can discern the state of the general environment. Is the pond still and glassy? Then it isn’t windy. Are there ripples from droplets falling into the pond? It’s probably raining. EEG is a way of doing this with electrical brain activity. Each brain state corresponds to a different pattern of electrical ripples. These patterns are used to classify what kind of brain state an animal is in.

To understand the effects of cannabis on sleep, we need to understand the difference between Rapid Eye Movement (REM) and slow-wave sleep (SWS). REM sleep is named for the fact that your eyes will often dart around beneath your eyelids, all while the rest of your body is paralyzed. This prevents you from acting out your dreams. REM is associated with the vivid dreams we usually have and sometimes remember. When you’re deprived of REM, there may not be obvious cognitive deficits (e.g. tiredness) but there is likely some effect on learning and memory. (See M&M #43 about the biological functions of REM and dreams.)

SWS is not typically associated with rich mental content. It is named for the large, slow-moving brain waves observed during this state. This type of sleep includes “deep sleep,” a recuperative form of SWS during which it’s most difficult to awaken someone. When you’re deprived of SWS, you feel groggy and tired. When you hear SWS, think “recuperation.” When you hear REM, think “dreaming.”

Under normal conditions, you cycle through multiple rounds of SWS and REM, typically starting with SWS. As you sleep, you go into SWS, then REM, back to SWS, and so on. With each cycle, there is less SWS and more REM. If you awaken naturally, without being disturbed, you will typically awaken from REM sleep.

Effects of THC consumption on sleep

As neuroscientist Dr. Andrew Kesner told me, “We’ve known for quite some time that THC has sleep-promoting properties in humans. Some of the earliest reports of cannabis use described this. In fact, ancient Indian Ayurvedic medicine describes cannabis as nidrajanan, a ‘sleep-inducing’ drug.”

Many modern consumers report that cannabis aids their sleep, but there is no one-size-fits all answer to how cannabis impacts sleep. THC’s effects on sleep will change depending on the cannabinoid content of what you consume, your history of use, sex, etc. In fact, one clear-cut thing we can say is that, with THC, its influence on your sleep will change over time–you won’t get the same effects if you consume THC once or twice that you will if you continue ingesting it long-term.

What are the likely, acute (short-term) effects on sleep THC may have if you begin consuming?

In general, acute THC consumption in humans makes people fall asleep faster and stay asleep once they fall asleep. It leads to increases in SWS and decreases in REM sleep. Consistent with experimental studies, surveys of medical cannabis patients show that the vast majority of those taking pharmaceutical sleep medications decrease their use of those drugs after starting medical cannabis.

The acute effects of THC on sleep may change over time, however. If you continue using THC products chronically, the effects on sleep may change. It’s less clear-cut how chronic THC consumption affects sleep in humans, but tolerance to THC’s effects, including on sleep, is evident. What’s more clear is that stopping THC consumption after chronic use often leads to sleep disturbances and vivid dreaming, an effect that eventually normalizes.

What is the effect on sleep architecture—the pattern of SWS and REM–seen when chronic THC consumption ceases?

Dr. Kesner explained: “People often report sleeping poorly during cannabis withdrawal, and studies have validated these self-reports, showing that time spent in SWS and REM is altered, even on the first night of abstinence. During abstinence, SWS is decreased, probably causing people to report not feeling rested. Likewise, REM sleep undergoes a ‘rebound,’ where it increases for a period of time, probably to ‘catch-up’ since it was previously decreased by cannabis use. This increase in REM likely causes the common report of vivid and unpleasant dreams during THC abstinence.”

Again, these effects tend to normalize if abstinence is maintained.

What happens when THC intake is stopped?

Recent animal research has measured the effects of withdrawal from chronic THC in mice, measuring SWS and REM sleep effects in both male and female mice. After several days of THC exposure, mice stopped receiving THC and their sleep was monitored early on during abstinence, and again a few days later. During early abstinence, male mice showed sleep disturbances–reduced overall sleep, mainly from less time spent in SWS. A few days later into the abstinence period, the pattern changed: male mice now showed an increase in REM sleep.

Mice can’t tell us about any dream content they might have, but this result is evocative of the reports of the unrestful sleep and vivid dreaming many consumers report following abstention. Intriguingly, this ‘REM rebound’ effect was not seen in female mice.

Why would THC affect sleep patterns at all, and why are the effects sometimes different in males vs. females?

Why do cannabinoids influence sleep?

The body’s endocannabinoid system (ECS) plays a modulatory role in almost any major physiological system you can think of. Receptors of the ECS, including the CB1 receptor responsible for enabling THC’s psychoactivity, are found throughout the tissues of the body, including the brain. THC is able to influence sleep because many of the key brain circuits regulating sleep are rich in CB1 receptors and other components of the ECS.

Different brain regions express different levels of ECS receptors, and this pattern of expression differs systematically between males and females. Like many aspects of physiology, this is an example of sexual dimorphism, which is why cannabinoids often affect males and females in different ways. The ECS also changes over the lifespan, which is why the effects of THC can change as we age.

Cannabis alters sleep, but your mileage may vary

As a rule of thumb, there’s a decent chance THC will help you fall asleep faster and stay asleep longer. It will likely increase the amount of SWS and decrease the amount of REM sleep you get. If you continue consuming THC, these effects may not last. As your tolerance builds, you may need to consume more to get the same effect. If you then stop consuming THC, you will likely experience sleep disturbances for a time, including vivid or unpleasant dreams.

Again: Biology is complicated. Cannabis products and THC will affect everyone differently depending on sex, age, cannabinoid content, and history of use. For better or worse, trial-and-error will be needed to determine exactly how cannabis will alter your sleep. All we can say with total certainty is that it will be altered.

Weed buyer beware: THC inflation is getting out of hand