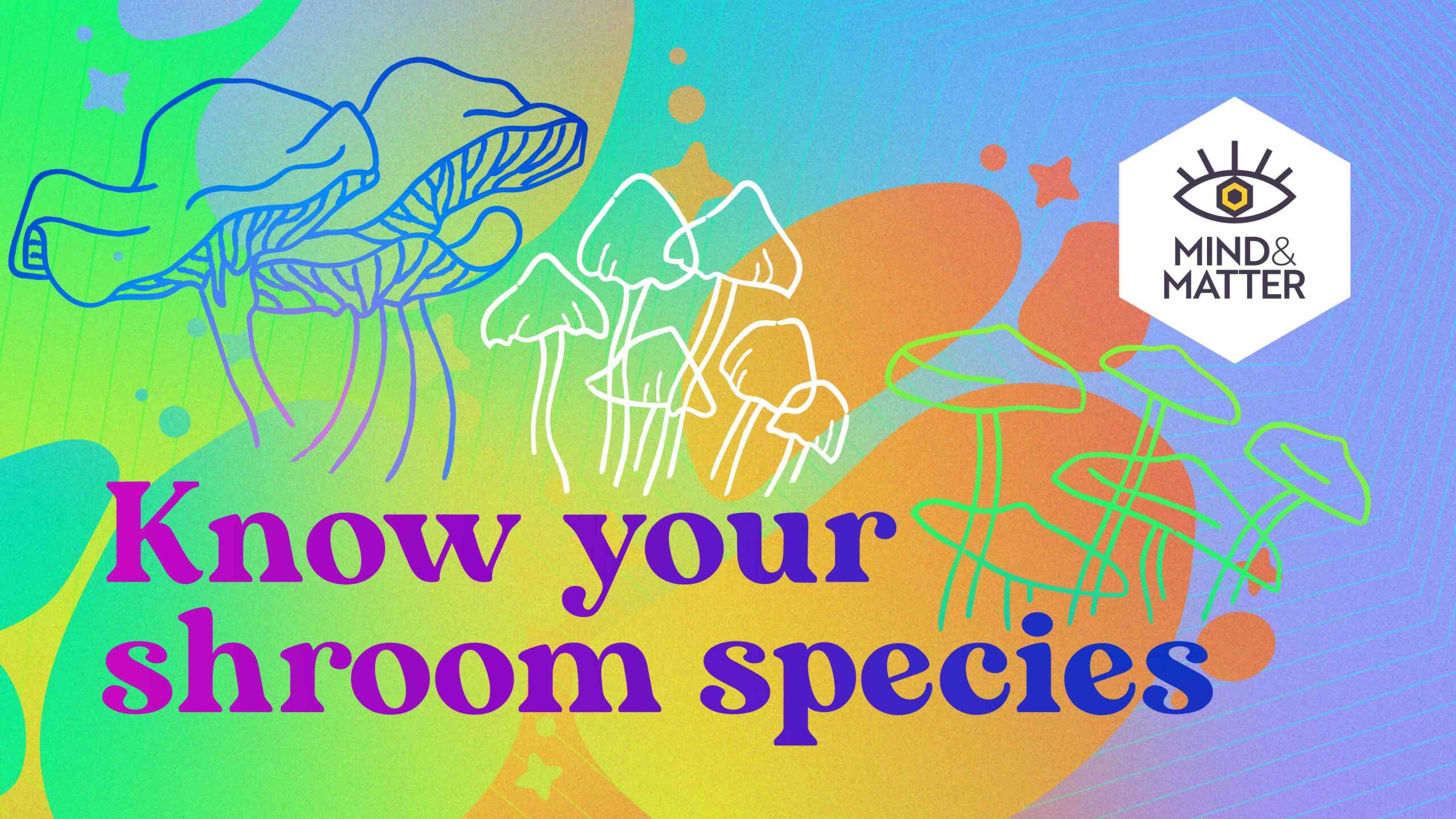 Mind & Matter is a monthly column by Nick Jikomes, PhD, Leafly’s Director of Science and Innovation.

Most cannabis consumers are familiar with the concept of strains. But does the same idea apply in the realm of psychoactive fungi? Is there a Blue Dream of magic mushrooms?

Let’s first get clear on what we mean by “strains.” All cannabis products are derived from plants belonging to just one species, Cannabis sativa. Within cannabis consumer culture, different varieties of this species are referred to as strains.

Different species and strains have different levels of psilocybin. Your experience will differ with the strain, as with cannabis.

New strains arise by crossing plants from different lineages of Cannabis sativa and are said to offer distinct effects. Because the effects of Cannabis depend on its chemical profile, this implies that products labeled with different strain names should have measurably different profiles, on average. This was the subject of a recent study conducted by the University of Colorado and Leafly. We found that this is sometimes true.

Scientists generally don’t like the term “strains” in the context of Cannabis. Many of them, such as Dr. Ethan Russo, prefer other terms. “Cultivar” is a botanical term referring to plants that have been bred by people to consistently display specific traits (i.e. phenotypes). The term “chemovar” is also used, drawing attention to chemical varieties distinguished by their chemistry—the particular mix of cannabinoids, terpenes, or other compounds.

I’m not interested in adjudicating linguistic holy wars, but in helping people understand the functional differences between distinct psychoactive products and biological entities, whatever we choose to call them.

Classifying based on effects

If you care about distinguishing varieties of psychoactive plants or fungi based on their potential effects, you should classify them based on chemical phenotypes (“chemotypes”).

Cannabis produces THCA. When heat is applied to THCA, it’s turned into the psychoactive compound THC. Magic mushrooms produce psilocybin, which is metabolized by the human digestive system into the psychedelic compound known as psilocin.

Similar to Cannabis, magic mushrooms tend to produce other compounds which may influence the overall psychoactive effect. Let’s briefly list the main ones before describing some of the most common species and strains of psilocybin mushrooms.

What’s different? The ratios of each compound

Different mushrooms may express systematically different ratios of each, akin to the different cannabinoid and terpene profiles displayed by certain Cannabis strains. The extent to which an “entourage effect” plays a role in giving different magic mushroom varieties distinct psychedelic effects remains to be determined.

For a deep dive into the chemistry of different species of magic mushrooms, check out this lecture from one of the OG psilocybin mushroom mycologists.

They also vary widely in potency, which can be difficult to gauge prior to consumption (see our dosing guide). Note that in the chart below, P. cyanescens contains more than five times as much psilocin, by weight percentage, as P. stuntzii. Ingest one when you think you’re ingesting the other and—well, it’s going to be a much different experience.

It’s important to emphasize that psilocybin content can vary dramatically between individuals within the same strain of one species. This is why magic mushrooms should always be approached with great care. If you split up five grams of dried mushrooms from the same exact batch, one half can be much more potent than the other.

Psilocybin levels: Not all Psilocybe mushrooms are the same

A feature that most Psilocybe mushrooms share is their tendency to bruise an interesting bluish color when they are physically damaged.

The presence of “bluing” is often used as one of the key indicators that a mushroom species contains psilocybin.

This effect occurs after the mushroom has been physically damaged and exposed to air, leading to chemical reactions that break down psilocybin and create new compounds.

The extent of bluing depends on the ratio of psilocybin to psilocin in the mushroom, as well as levels of other enzymes. It’s possible for some magic mushrooms to contain a psychedelic dose of psilocybin/psilocin without bruising blue. So while this color change can be one diagnostic feature about whether a mushroom is “magic,” it may not be a reliable indicator of potency.

Psilocybe cubensis is by far the most common species of psilocybin mushroom. If you have encountered magic mushrooms before, there’s a good chance it was a strain of P. cubensis.

Similar to different strains of Cannabis, which all belong to the same species (Cannabis sativa), there are many strains of P. cubensis. They can differ in terms of physical features, growth characteristics, and potency. These differences are often tied to the particular environments that each has adapted to.

Despite their differences, most P. cubensis strains are considered to be among the most beginner-friendly due to their relative heartiness. In terms of potency, they tend to have medium-high psilocybin levels. They are found all over the world and thrive in warm, wet climates (often in the tropics). Here are some of the most common cubensis strains:

This species is among the most widespread wild Psilocybe mushrooms in the world, with comparable potency to P. cubensis. Unlike cubensis and other mushrooms native to the tropics, Liberty Caps can be found in more temperate climates within Europe, North America, Canada, and certain places in the Southern Hemisphere (e.g. New Zealand, Chile).

In terms of phenotype and habitat, Liberty Caps are small with thin stems. Their name comes from the bell-shaped cap they have. These mushrooms often camouflage with the grass they grow in and are not easy to grow indoors. For that reason, they are commonly picked in the wild, not cultivated.

Named for the wavy caps that distinguish them from most Psilocybe species, P. cyanescens is often considered to be the most potent psilocybin mushroom. They can be found in the wild in the Pacific Northwest of the US, as well as Central Europe.

They like to grow in woody debris and can often be found in human-made environments containing wood chips or mulch.

Due to their high average psilocybin content, consumption should be undertaken with especially great care.

As its name suggests, this species grows in Mexico. Like many mushrooms, it sprouts its fruiting bodies during the rainy season and is most common in the Mexican states of Oaxaca, Michoacán, and Puebla.

This species grows at higher altitude than most other Psilocybe species and can be found in mossy areas, deciduous forests, meadows, and soils rich in manure (although it does not grow directly in dung).

Their nickname Pajaritos translates to “little birds,” which refers to the fact that they often induce a potent experience despite their small stature. Their other nickname, Teonanacatl, means “flesh of the gods.”

P. mexicana is thought to be the mushroom used ritualistically by the Aztecs. It was also the species originally sent to Albert Hoffman, the chemist who first synthesized LSD, in the 1950s. He used it to cultivate additional specimens and isolate psilocybin and psilocin.

This species is known by many informal names: Flying Saucers, Blue Angels, Blue Runners, or Azzies. They are native to the West coast of the US and mainly found in the Columbia River delta due to their preference for sandy soils.

Compared to tropical species that tend to be cultivated indoors, such as P. cubensis, this species tolerates temperatures as low as 60 degrees Fahrenheit and can be cultivated outdoors. They have bell-shaped caps, with a shape somewhere between Liberty Caps and P. cubensis.

Found in the wild mainly in the Pacific Northwest of the United States, this species can be found near older grassy lawns, often in well kept human-made structures like parks, churches, government buildings, and schools.

Named after mycologist Daniel Stuntz of the University of Washington, this species tends to have lower psilocybin levels and may not bruise bluish much.

Another species found mainly in the Pacific Northwest of the US, this species’ habitat is similar to P. stuntzii and can be found in well-manured soil or mulch with a mix of grass that is old and well-kept.

Again, magic mushrooms often like to grow areas frequently disturbed and maintained by human activity. Bluing occurs heavily in this species when handled.

Found mainly in the Pacific Northwest of the US and Canada, this species grows in clusters along trails or roads in coniferous forests. It is often mistaken for Psilocybe semilanceata, although the latter can be distinguished by a somewhat differently shaped cap.

Psilocybin mushrooms are a fascinating and diverse group of fungi with a rich history reaching all the way back to prehistory. They are common in the wild in certain ecological niches throughout the world and often cultivated indoors. While their possession is decriminalized in certain places, they are illegal in many countries and US states.

The psychedelic experiences they induce can be fun, life-changing, healing, overwhelming, or terrifying—sometimes each of these within the same trip. Their psilocybin content is very difficult to assess ahead of time, so proceed with extreme caution.

What is linalool & what does this cannabis terpene do?