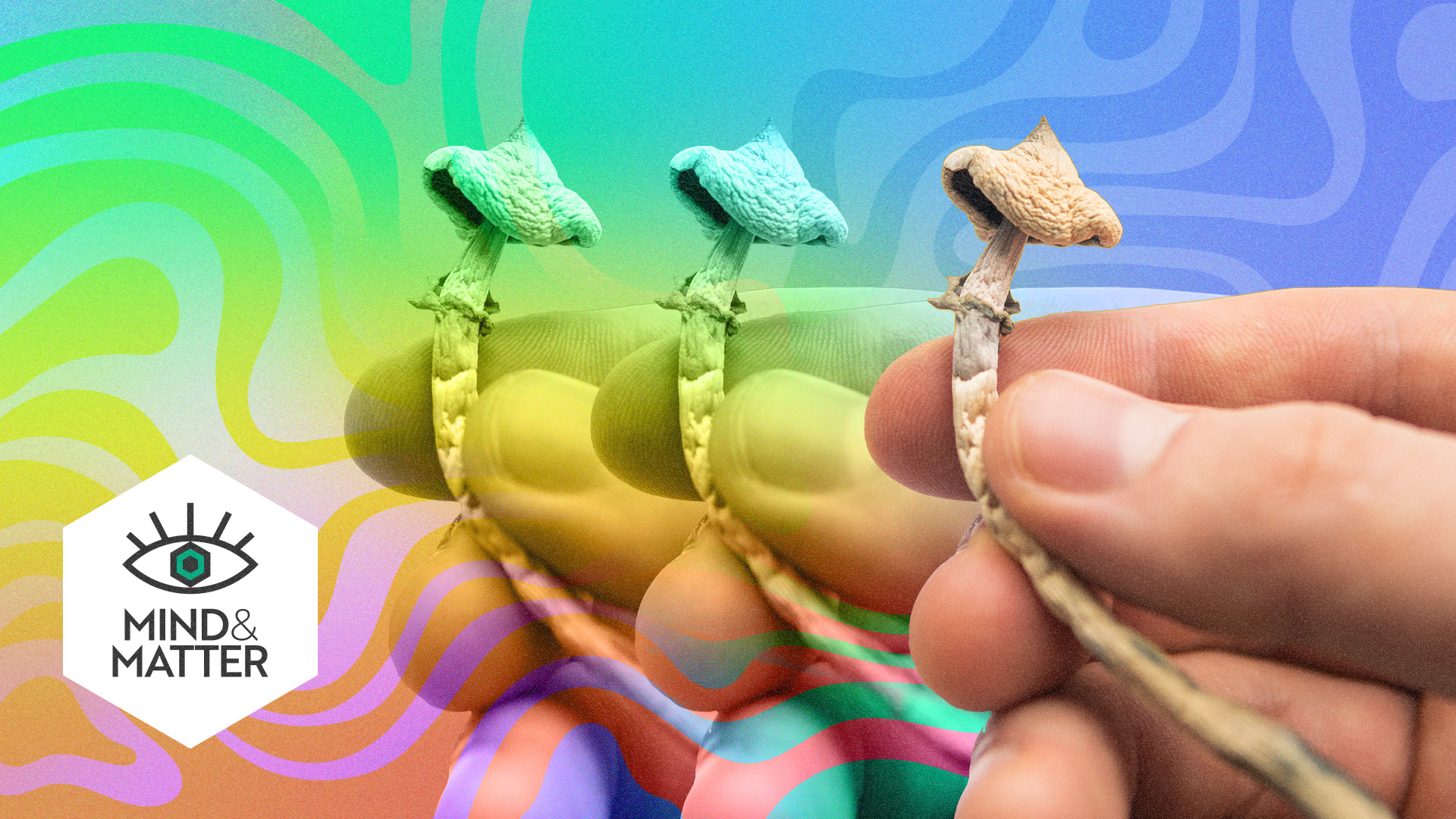 ‘Mind & Matter’ is a monthly column by Nick Jikomes, PhD, Leafly’s Director of Science and Innovation.

A recent headline-making clinical trial showed that a combination of psilocybin (found in magic mushrooms) and psychotherapy was able to reduce signs of alcoholism compared to placebo.

Let’s look at how the study was conducted and what the findings mean. I also want to explore the study’s broader context: how the results connect to animal research looking into the brain mechanisms underlying psilocybin’s anti-addiction effects. We’ll also consider the subjective experiences reported by patients who have undergone psilocybin-assisted psychotherapy to treat their alcoholism.

Before diving into the study, let’s distinguish between the addictive and dependency liability of different drugs and examine the societal costs of heavy drinking.

When you have an alcoholic drink, you’re ingesting the psychoactive drug ethanol, one of the most widely consumed intoxicants.

As with other psychoactive drugs, its effects are dose-dependent: You will have a very different experience on low, medium, and high doses. At low doses your experience may be pleasant and uplifting. At high doses, the opposite.

Many people make the mistake of thinking about drugs in binary terms: They are addictive, or they are not. All drugs exist on a spectrum of habit-forming potential, each with its own risk of addiction and dependence. Addiction is the tendency to want to keep taking a drug even after its rewarding effects taper off and despite negative consequences, leading to compulsive drug-seeking. Dependency is when you experience negative withdrawal symptoms in the absence of a drug, which you will naturally want to avoid.

Some drugs are addictive but carry little risk of dependency. Cocaine is an example. Roughly one in five people who consume cocaine with regularity will develop compulsive drug-seeking behavior, but most will not experience withdrawal in the drug’s absence. Some drugs can induce dependency without addiction, such as caffeine. Others are highly addictive and cause strong dependency. Think fentanyl.

Addictive drugs, including cocaine and opioids, share a common property of increasing dopamine signaling within specific reward-related brain circuits. Drugs like caffeine do not.

These distinctions were made clear in my conversation with neuroscientist Dr. Christian Luscher:

Compared to more highly addictive drugs, alcohol’s addictive potential is relatively low. It also carries with it the risk for dependency, which can be severe in the heaviest drinkers. Alcohol is one of the only drugs for which death is a possible side effect of withdrawal (another example is benzodiazepines), although this only happens in a subset of the heaviest drinkers who attempt to quit suddenly. In most people with alcohol dependency, withdrawal symptoms may include tremors, insomnia, anxiety, headaches, and so forth.

Approximately 5% of adults in the US qualify as having Alcohol Use Disorder. As with any other drug, a “use disorder” is when your desire to continue ingesting the drug interferes with your ability to conduct the normal affairs of your life—the things you did without much problem prior to using the drug. If your alcohol intake is upsetting your ability to hold a job, remembering to pick up the kids, or maintain normal relationships, then you have a use disorder.

Many mysteries left to solve with alcohol

In terms of the mechanisms driving alcohol’s effects, things are more mysterious than for other drugs. Like cocaine and opioids, alcohol does increase dopamine signaling in key reward circuits of the brain, but scientists still aren’t sure exactly how it does this.

Unlike cocaine or opioids, which exert their effects through well-defined molecular interactions with specific brain receptors, alcohol has many different molecular targets in the brain, making it tricky to work out a complete understanding of how it’s doing what it does.

Despite its lower addiction liability compared to some other drugs, alcohol consumption is widespread. The CDC estimates that excessive drinking costs ~$250 billion annually, from healthcare and criminal justice costs, vehicle collisions, and lost workplace productivity.

About two-thirds of American adults consume alcohol annually—in other words, have at least one drink of alcohol per year. About 1 in 20 American adults are considered heavy drinkers, defined as women who have 7+ drinks per week and males who have 14+ drinks per week. (As with many drugs, alcohol tends to affect men and women with different levels of potency, due to physiological sex differences in either metabolism or brain sensitivity).

Despite the toll that heavy drinking takes on both individuals and society, treatment options are limited. The complex and poorly understood biology of ethanol function makes “rational drug design” difficult. The endemic culture of casual drinking in the US and elsewhere is another barrier–when everyone around you is doing something casually, it’s that much harder to moderate your own consumption.

Back in the 1960s and 70s, several studies using the psychedelic alkaloid LSD to treat alcoholism saw positive results. It wasn’t until over 40 years later that another psychedelic—psilocybin—was found to have similar results in a small proof-of-concept study.

I spoke to one of the participants in that trial, who shared his experience:

Motivated by those historical results, researchers at New York University recently published the results of a clinical trial with 95 people with Alcohol Use Disorder.

Half were given psilocybin and half the active placebo diphenhydramine, both in conjunction with psychotherapy. “Active placebos” are often used in trials testing the effectiveness of psychoactive drugs. In contrast to an inert placebo, active placebos have psychoactive effects, making it more difficult to guess whether you are in the placebo control group or not. If you gave ten people a high dose of psilocybin and ten a sugar pill, odds are good that everyone will be able to guess whether they got the placebo or not.

During the 32-week-long double-blind period following the first drug session, the percentage of heavy drinking days was 9.7% for the psilocybin group and 23.6% for the placebo group.

In other words, those who received psilocybin engaged in heavy drinking about one in every ten days, while those in the placebo group did so nearly one quarter of the time. The difference between the two groups was highly significant—more than twofold.

The findings indicated, as the study’s authors would later write, that psilocybin administered in combination with psychotherapy, “produced robust decreases in the percentage of heavy drinking days compared with those produced by active placebo and psychotherapy.”

These results build on historical studies suggesting that psychedelic drugs may aid psychotherapy in combating alcohol addiction. The effects of psilocybin may not be limited to alcohol addiction, however, as other research has recently suggested that it may also be useful for smoking cessation.

Clinical trials such as this are exciting because they measure effects in human beings suffering from psychiatric disorders. They tell us what these drugs (in combination with psychotherapy) are capable of, but they don’t tell us how they might be working in the brain to achieve it. To understand what underlying mechanisms may be at play, we have to look at animal research.

In both humans and animals suffering from compulsive alcohol consumption, individuals not only exhibit alcohol cravings and excessive intake, but often suffer cognitive impairments. This includes increased impulsivity and attention deficits—impairments that can make it much more difficult to kick bad habits.

I previously wrote about a study in alcohol-addicted rats given psilocybin. In that study, psilocybin targeted a common molecular mechanism in the brain that helped treat not only alcohol cravings but also the types of cognitive impairment mentioned above. Psilocybin was able to restore levels of a specific brain receptor in certain parts of the brain, leading to improvements in both compulsive alcohol-seeking and cognitive impairment.

In both this animal research and the recent clinical trial, macrodoses, not microdoses, were used. A topic of debate and ongoing research is whether full-blown psychedelic experiences are required for the therapeutic effects that have been observed for psychedelic-assisted psychotherapy. While this question is not fully resolved, most studies with clear positive findings have used doses of psilocybin that would have strong psychedelic effects for most people.

Whether or not the subjective psychedelic experiences are strictly required for their anti-addiction effects, it’s instructive to listen to descriptions of these experiences from the patients themselves.

One man’s psychedelic experience in a clinical trial

In 2021, I spoke to Jon Kostakopoulos, a participant in one of the early proof-of-concept studies investigating psilocybin-assisted psychotherapy for alcoholism. Kostakopoulos was drinking a lot. After his psilocybin sessions, he was able to cease alcohol intake entirely. While not all participants saw results as striking as Jon’s, hearing him describe what his experiences were like was eye-opening.

“It did feel like this monumental thing was happening,” Kostakopoulos told me. “I remember one of the things I saw—the visuals—it was a glass liquor bottle in the middle of the desert, just sitting there alone on the sand. And then all of a sudden the glass disintegrates into the sand. And I thought that was pretty obvious and profound symbolism for my alcoholism leaving me. It was a very reassuring experience for me.”

You can hear more about Jon Kostakopoulos’ experience here:

As of this writing, Jon is still alcohol-free and says he has not struggled with cravings since completing the trial. He took his last drink on October 9, 2015, just before his first psilocybin session. Since then he has gotten married and spends much of his time trying to get this treatment to more people through his non-profit, Apollo Pact.

The future of psychedelic-assisted psychotherapy

A key next step for studies examining the use of psilocybin-assisted psychotherapy as an addiction treatment is to replicate these findings in larger clinical trials. The latest study was conducted using dozens of patients. Before FDA approval, most drugs go through massive phase III clinical trials with thousands of patients.

More than four decades elapsed between the initial studies investigating the potential therapeutic effects of LSD and the present “psychedelic renaissance” beginning in the 2010s. In between those periods were the “dark ages,” when the War on Drugs was in full swing and psychedelic research halted. Today, research dollars and VC funding have been pouring into the academia and psychedelic startups, much of it for the purpose of developing next-generation psychedelic drugs and running all of the required trials.

Recent scientific results suggest that the future of psychedelic therapy continues to look bright. Social stigma is steadily fading and more jurisdictions are moving to decriminalize psychedelics. Let’s hope that we proceed with appropriate caution. We are already seeing signs of commodification and a move toward mass market appeal. One way this manifests is in the premature excitement many have for regular microdosing, purported to enhance everything from creativity to mood and cognitive function. But clear scientific evidence for these claims is lacking and there are serious concerns that frequent ingestion of psychedelics may carry risks.

The future looks bright. But overzealousness could always send us back to the dark ages.

Stoners aren’t lazy; here’s the science to prove it