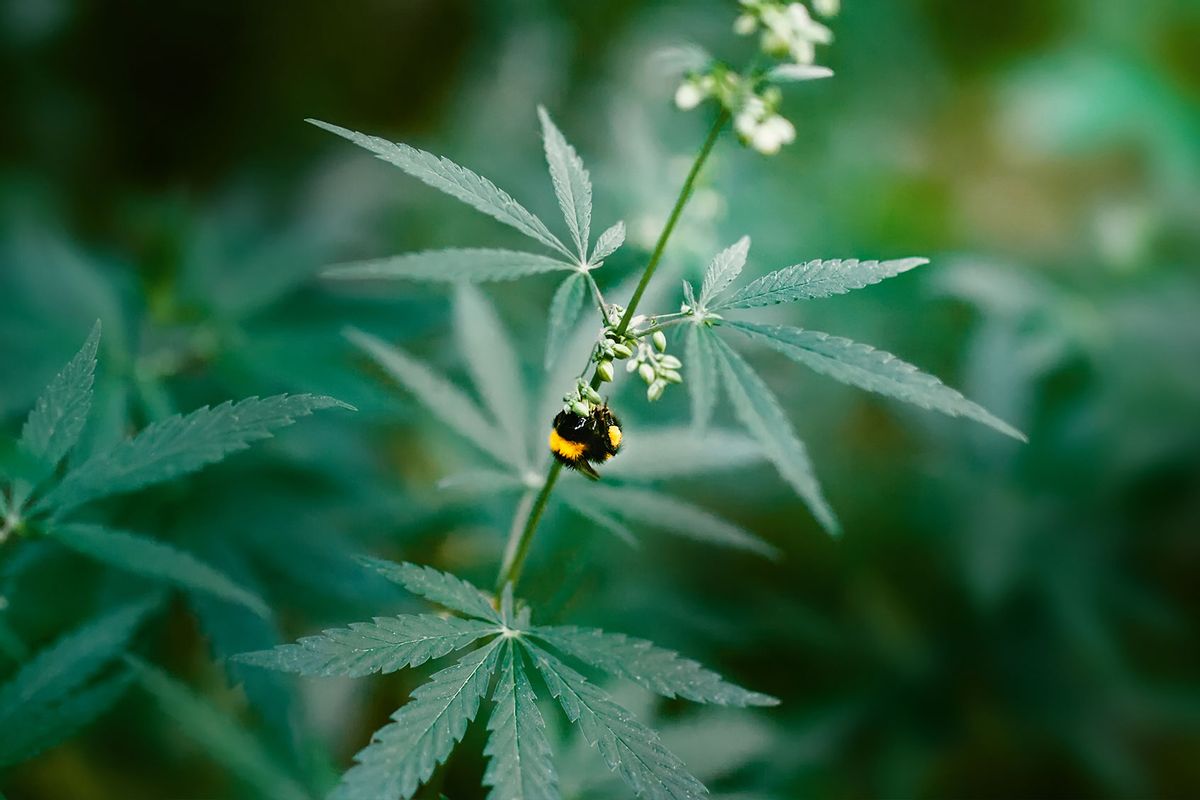 “Isn’t it beautiful?” a friend once asked me as we shared a joint in The Netherlands. “We’re only smoking flowers.”

She was right. Marijuana, the dried and processed product of Cannabis sativa plants, is the flowery part, as opposed to tobacco or tea leaves. When people say they enjoy smoking “bud,” it’s meant literally. Despite how obvious this may seem, it’s always struck me as quietly awe-inspiring.

While humans clearly love these flowers, so do insects, especially bees, albeit for different reasons. And just like medical marijuana has been shown to improve human health by effectively treating epilepsy, chronic pain, chemotherapy nausea and more, insects can benefit from cannabis as well.

Honeybee health is extremely important to farmers who rely on the flying little workers to pollinate more than 100 different crops, which provides about $6.4 billion in annual economic value. But against a backdrop of catastrophic insect decline, driven by the overuse of pesticides and unchecked urbanization, honeybee populations are suffering.

Parasites, diseases and pesticides have contributed to widespread honeybee deaths, a phenomenon known as Colony Collapse Disorder. In some cases, tens of thousands of bees would drop dead in days, sometimes wiping out entire hives. While this trend is slowly being reversed, it’s still a big concern for beekeepers and those who enjoy eating most fruits and vegetables.

In an attempt to improve honeybee health, researchers at the University of Life Sciences in Lublin, Poland have tried feeding their bugs many different substances, including caffeine, black pepper extract and curcumin, the main ingredient in turmeric. Despite some positive results, none of these substances have been a silver bullet. They don’t seem able to balance effectiveness with strict safety requirements necessary in beekeeping.

So these Polish researchers, Patrycja Skowronek, Łukasz Wójcik and Aneta Strachecka, have turned to hemp extracts. Hemp is cannabis that is low in THC, the chemical responsible for the stoney, “high” feeling. In contrast, hemp is high in CBD, a chemical largely associated with the medical benefits of cannabis.

Previous research by this team has shown that hemp extracts increased the lifespan of honeybees and could “help them with the fight against environmental pollution and the increase of oxidative stress.”

But they weren’t exactly sure how this was happening. Newly published results in the journal Animals took a closer look at the immune system of honeybees after being given CBD, to tease out the mechanisms that could make bees healthier. In this experiment, they also kept the bees outside, exposing them to more environmental stress, while previous trials mostly used caged bees. This means the results may better reflect what a honeybee would encounter in the real world.

The bees on CBD not only lived longer than controls, they had higher concentrations of biomarkers, such as albumin, a protein that acts against inflammation.

Bees have very different immune systems than humans. They don’t exactly have blood, but a liquid called hemolymph functions about the same way. Instead of livers, honeybees have a fat body that doubles as nutrient storage and an immune shield that fights viruses and other pathogens. So how does a compound like CBD work on both humans and bugs if we’re so different? (Note that bees and other insects do not get high from cannabis or any of its components; they lack the necessary receptors.)

In this experiment, there were three groups of bees, with 320 bees sampled in total. Some were fed CBD in sugary syrup, some were given CBD via a cotton strip placed in the hive, and the rest acted as controls, fed nothing but sugar and glycerin.

Every few days, the researchers took some bees and extracted their hemolymph, which was analyzed for certain biomarkers that indicate good health. The bees on CBD not only lived longer than controls, they had higher concentrations of biomarkers, such as albumin, a protein that acts against inflammation.

“The higher concentration of total protein in the groups supplemented with CBD indicate a higher production of immune proteins in the bees’ organism,” the authors wrote, leading them to conclude, “CBD extract may prove to be a good supplement and can have positive effect on the immune system of honeybees.”

It likely wouldn’t be difficult or expensive to give honeybee colonies CBD, so this may be a good tool for farmers to help their favorite pollinators. Besides, they can grow the plant and extract the CBD themselves, a strategy increasingly suggested by experts.

Other pollinators, like native bee species, butterflies, flies and bats are at risk of extinction thanks to pesticides, habitat loss and climate change.

Even though hemp does not produce any nectar, bees are huge fans of this plant because it pumps out large amounts of pollen. In 2018, researchers from Cornell University visited 11 hemp farms across the Finger Lakes region of New York and noted that hemp flowers supported 16 different bee species. Their research, published in Environmental Entomology, reported “hemp has the potential to provide a critical nutritional resource to a diverse community of bees during a period of floral scarcity.”

In other words, bees really love weed and it may even be good for them.

However, it’s really worth noting that honeybees aren’t truly facing extinction, despite what you may have heard from certain “bee-friendly” corporations. The yellow-and-black bug we’ve all come to associate with honey is just one species, Apis mellifera, the European honeybee. It’s a domesticated species not actually native to North America and was brought over by colonizers. Indigenous Peoples relied on other bees (of which, there are nearly 4,000 other species) for pollinating their crops.

Honeybees are extremely important, yes, but they are agricultural animals, akin to tiny flying chickens or cows. They are no more at risk of dying out than any other factory farmed creature. Colony collapse disorder is a genuine problem, as it makes things harder for farmers, but it is unlikely to ever truly eradicate the honeybee. The issue also seems to be improving. A 2020 report from the U.S. Department of Agriculture reported that honeybee colonies had risen eight percent from the year before.

However, other pollinators, like native bee species, butterflies, flies and bats are at risk of extinction thanks to pesticides, habitat loss and climate change. Conservation efforts should focus on preserving the less visible insects as well. The Polish researchers didn’t test if CBD could help other bugs, but it might work just as well given the similarities in bee immune systems.

Using CBD to prevent colony collapse in honeybees is a novel strategy for agriculture and should certainly be explored more. But it shouldn’t distract from the fact that our natural environment is being actively destroyed while domesticated insects are doing relatively fine. Let’s develop strategies for improving the health of all beneficial insects, not just the ones that give us honey.