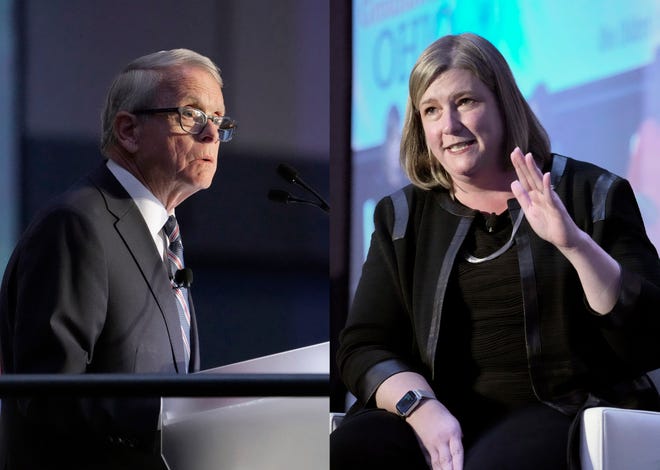 Voters will decide on Nov. 8 whether DeWine or Whaley will serve as the state’s next leader. DeWine has rejected offers to debate Whaley, only the second time in nearly 50 years without a formal face-off.

So, the USA TODAY Network Ohio bureau is breaking down where each candidate stands on some of the top issues facing Ohioans as early voting begins.

DeWine: The governor is campaigning on his record, which includes helping to lure Intel to build its semiconductor plants in Ohio − a $20 billion investment.

But overall, Ohio was among the worst states for job growth between August 2021 and August 2022, increasing by 1.5% compared to 3.2% in Michigan and 3.1% in Kentucky, according to the U.S. Bureau of Labor Statistics.

DeWine has slammed Democratic President Joe Biden, particularly in ads, for the nation’s high inflation. Inflation has remained elevated even as gas prices decrease, according to the Labor Department’s Consumer Price Index.

Whaley: DeWine’s Democratic challenger has proposed using federal stimulus money to give Ohioans earning up to $80,000 a $350 check to offset the pain of inflation.

As mayor of Dayton, jobs increased by 3.4% during Whaley’s tenure, which stretched from January 2014 to January 2022. Cleveland’s job growth was under 1% during that time and Columbus grew by 11%.

DeWine: Since taking office, the governor signed two budgets cutting income taxes by $2.2 billion. Those earning up to $25,000 now pay no income tax. Ohio’s most affluent residents also got a 16% tax cut when the state eliminated the top tax bracket in 2021.

In 2019, DeWine also championed a 10.5 cents-per-gallon tax hike on motor fuel and a 19 cents-per-gallon increase on diesel to pay for Ohio’s roads and bridges. DeWine initially wanted a higher tax but lawmakers reduced the final amount.

The Tax Foundation, a fiscally conservative think tank, ranked Ohio 37th for business tax climate in 2022, down from 45th in 2018 when DeWine was elected to replace GOP Gov. John Kasich.

Whaley: During Whaley’s tenure as mayor, voters approved an income tax hike from 2.25% to 2.5%. The change meant Dayton has one of the highest income tax rates in the state. However, several large Ohio cities have the same rate, including Columbus and Cleveland.

The income tax increase helped to pay for universal pre-kindergarten in the city.

If elected, Whaley wants to shrink the tax break given to certain businesses, which allows lobbyists and attorneys to forgo paying income taxes on their first $250,000.

DeWine: DeWine signed an overhaul of how Ohio’s K-12 schools are funded. The new formula had support from Democrats and Republicans alike. But the question remains whether lawmakers will continue to pay for it.

DeWine expanded access to vouchers that allow students from lower-income families to attend private schools. A new proposal from GOP lawmakers would expand the option to all students.

“Gov. DeWine believes every parent should have the right to decide what is best for his or her child’s education. He supports school choice and ensuring access to quality choice options − public, charter, private and parochial,” his campaign said.

Whaley: Whaley supports the overhaul of K-12 payments but says it needs to be fully funded. She opposes expanding the voucher system, which she says hurts the state’s public schools.

She also backs universal pre-kindergarten, a policy that she championed in Dayton.

DeWine: He has repeatedly signed restrictions on abortion access into law, including a ban on doctors performing abortions after cardiac activity is detected. That law took effect after the U.S. Supreme Court overturned Roe v. Wade and is currently on hold.

DeWine has described Ohio as a “pro-life state.” He told Ohio Right to Life members that he would talk with lawmakers about crafting legislation “to go as far as we can to protect human life.”

Whaley: She opposes Ohio’s six-week abortion ban and other restrictions on the procedure. The Democrat said that she would advocate for a constitutional amendment to enshrine Roe v. Wade protections for Ohioans.

DeWine: After a mass shooting in Dayton’s Oregon District in 2019, DeWine promised to “do something” on gun reform. He initially pitched expanding the state’s “pink slip” system, which places mentally ill Ohioans in hospitals for up to 72 hours, and increasing penalties for those who sell guns to people banned by law from having them.

He stopped short of supporting universal background checks or a red flag law, which would allow police to ask judges to remove guns from potentially dangerous people. But even DeWine’s more modest proposals died in the GOP-controlled Legislature.

Instead, DeWine signed bills eliminating mandatory training and licenses for those who carry concealed weapons and reducing training required for arming teachers. He also signed a “stand your ground” law eliminating the requirement to retreat before using deadly force.

Whaley: Whaley would push for universal background checks and a red flag law. Those proposals could be a tough sell with Ohio’s GOP-controlled Legislature.

She committed to vetoing bills like the ones DeWine signed on concealed carry and armed teachers. However, Republicans hold a veto-proof majority in the Ohio Legislature.

DeWine: The governor opposes the legalization of marijuana for recreational use, saying it would be a “mistake.” Ohio currently permits medical marijuana.

Whaley: She supports legalizing recreational marijuana in Ohio, saying the current penalties disproportionately harm Black residents. While mayor, Dayton eliminated fines for marijuana use, according to the Dayton Daily News.

DeWine: Ohio has not executed a death row inmate under DeWine’s administration. The state has a de facto moratorium because it can’t obtain the drugs needed to execute prisoners.

Whaley: Whaley opposes the death penalty. She would instead support life in prison without a possibility of parole for Ohio’s most dangerous criminals.

Formally ending the death penalty, when the state has already gone years without carrying out an execution, is the right thing to do both morally and financially, Whaley said.

That law is at the heart of a federal corruption investigation involving former Ohio House Speaker Larry Householder. After the arrests, DeWine signed a bill repealing portions of House Bill 6, including the nuclear subsidies.

DeWine did create a new way of paying for water projects, ranging from aging infrastructure to failing septic systems, called H2Ohio. Federal and state money have paid for dozens of projects, including efforts to find and replace toxic lead pipes.

Whaley: Whaley wants to repeal House Bill 6 fully to restore renewable energy standards and eliminate a fee for the owners of coal plants.

She also wants to move the state government to renewable energy by 2030 by directing investments to Ohio-based wind, solar and other renewable energy projects. To lower costs, Whaley would prioritize bulk purchasing of that energy,

DeWine: DeWine has prioritized tackling mental health and behavioral health, particularly among children. But Ohio’s children were still hit hard by the COVID-19 pandemic, reporting high levels of depression and/or anxiety, according to the annual KIDS COUNT data book released by the Annie E. Casey Foundation.

Infant mortality remains a problem, particularly for Black children, even as the rate of deaths dipped slightly in 2020.

Ohio is among the worst states for investing state dollars in public health but has made improvements in recent years.

Whaley: Whaley wants to cap insulin prices at $30 per month, create an independent health oversight board to rein in pharmacy middlemen and fine companies that spike prices without clinical evidence.

DeWine: As attorney general, DeWine defended Ohio’s ban on same-sex marriage all the way to the U.S. Supreme Court, which ultimately allowed Jim Obergefell to appear on his husband’s death certificate and legalized same-sex marriage nationwide.

DeWine hasn’t taken a public position on GOP proposals to restrict how teachers talk about sexual orientation and gender identity. One bill would also ban what Republicans call “divisive concepts,” such as the 1619 Project and critical race theory.

DeWine did extend anti-discrimination protections for state employees based on sexual orientation and gender identity. But he has not advocated for a law to extend those protections to LGBTQ Ohioans statewide.

He signaled that he wouldn’t support a ban on transgender athletes participating in girls’ sports, saying in 2021 that “this issue is best addressed outside of government.”

Whaley: Whaley supports anti-discrimination protections for individuals based on their sexual orientation and gender identity.

She backed a similar proposal in Dayton and officiated weddings for free in the week following the U.S. Supreme Court legalizing same-sex marriage. Dayton also created a domestic partners registry in 2012 to offer some benefits to couples despite Ohio’s prohibition on same-sex marriage.

DeWine: DeWine created the Office of Health Opportunity within the Ohio Department of Health to target health disparities and address the social determinants of health. He also targeted Black and other minority Ohioans in the state’s COVID-19 response.

Whaley: Whaley wants to tackle Ohio’s high Black infant mortality and racial wealth gap. She wants to increase the minimum wage to $15 an hour and invest in minority-owned businesses.

Jessie Balmert is a reporter for the USA TODAY Network Ohio Bureau, which serves the Akron Beacon Journal, Cincinnati Enquirer, Columbus Dispatch and 18 other affiliated news organizations across Ohio.