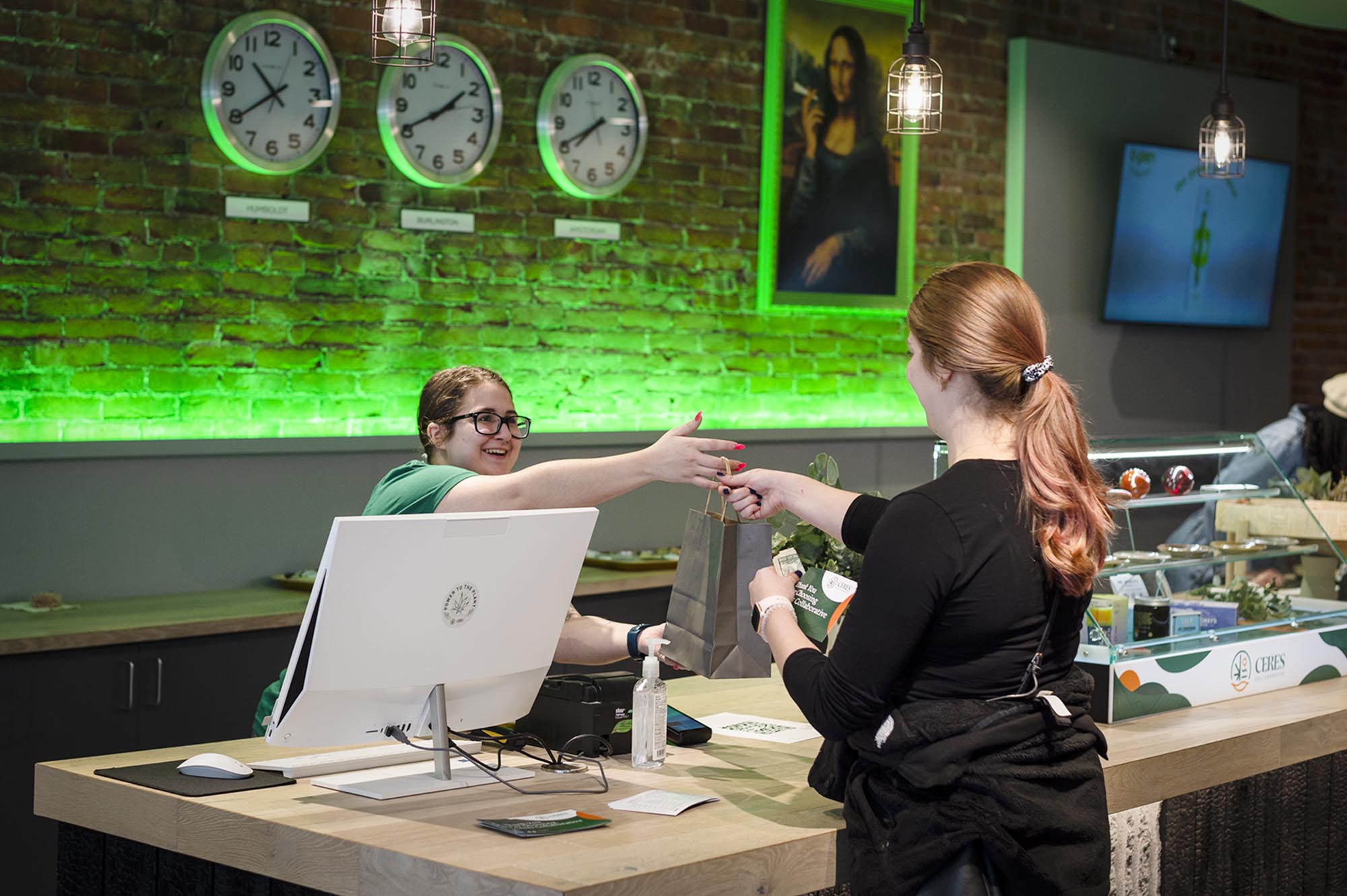 “Fantastic” is how Dave Silberman described the first days since he opened his store, FLORA, in Middlebury. “We had a really nice opening weekend. It was a lot of fun. It was exhausting.”

Silberman said customers had about a 45-minute wait when he opened the doors that first day. The nine employees who worked the store Saturday could not possibly have handled more transactions, he said, estimating that about 1,000 people visited the store over the weekend. He said the sales floor can handle about eight customers at a time while another eight customers wait in a lounge.

What was for sale these first few days was cannabis flower. Silberman said the store offered 11 different strains from five growers sold in pre-rolled joints and in 3.5-gram (about ⅛-ounce) and seven-gram (quarter-ounce) jars. Regulations require all growers must be based in Vermont and all sales must be of cannabis grown and processed in Vermont.

The store closed Monday and reopened Tuesday, when he said it was busy all day long. Silberman spoke to VTDigger minutes after he had opened the store Wednesday.

At Burlington’s Ceres Collaborative, which also opened last Saturday, chief operating officer Russ Todia said the store had seen lines every day. He said the store has had about 12 customers inside at a time.

After the excitement of Saturday, Todia said Wednesday, fewer customers came in on Sunday, but more came in on Monday and even more on Tuesday.

“It could just be that word has gotten around that we’re open,” Todia said.

Silberman anticipates that by this weekend, FLORA will have more strains of flower and its first batch of gummies for sale.

At Thursday’s meeting of the Cannabis Control Board, chair James Pepper acknowledged problems with the diversity of product due to delays in approving licenses.

“But the supply held,” Pepper noted, after retailers and growers initially had said there may be a shortage of supply ahead of recreational retail opening.

Pepper also acknowledged delays in retailers receiving their certificates of occupancy from the state Division of Fire Safety, without which they cannot be licensed. He said the problem is occurring in cities and towns that have municipal inspection agreements with the division, including Barre, Bennington, Brattleboro, Burlington, Hartford, Montpelier, Putney, St. Albans and Winooski.

The board on Thursday licensed one more retailer, Apex Arboretum in Burlington, in addition to four manufacturers, three growers, four wholesalers (including Apex Arboretum) and a lab, SH Lab, in Colchester.

Want to stay on top of the latest business news? Sign up here to get a weekly email on all of VTDigger’s reporting on local companies and economic trends. And check out our new Business section here.

Did you know VTDigger is a nonprofit?

Our journalism is made possible by member donations. If you value what we do, please contribute and help keep this vital resource accessible to all.

Analysis | How Legal Weed Has Changed the US