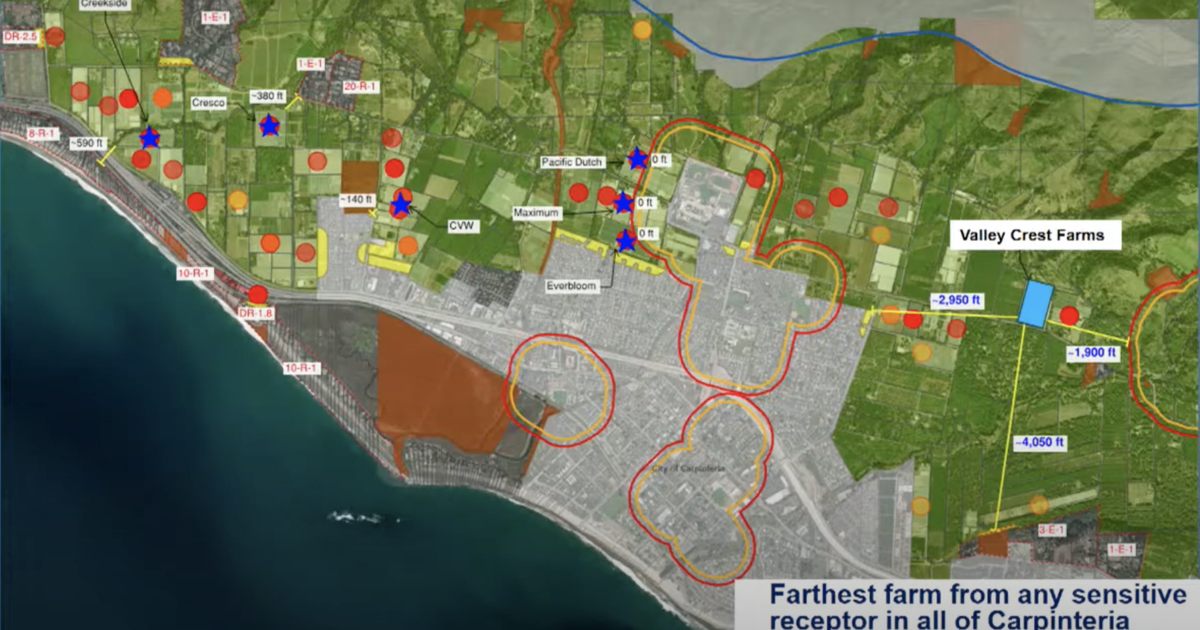 Although the Santa Barbara County Planning Commission denied the Cate School’s appeal of the project this past July, the commission asked Valley Crest to implement internal greenhouse carbon scrubbers, one of the school’s requests. When the applicants disagreed with the commissioners’ request, county staff then told the applicants that they could appeal the condition with the Board of Supervisors.

Prior to county planner Ben Singer’s presentation to the board during the meeting, the directors accepted two letters from odor-control group Concerned Carpinterians member Anna Carrillo and Holland and Knight attorneys Nicholas Targ and Jessica Laughlin, on behalf of the appellants.

Singer’s presentation to the supervisors raised Valley Crest’s one issue in its appeal: The Planning Commission’s condition exceeds the requirements of odor abatement as outlined in Article II, and Valley Crest’s previous odor abatement plan sufficiently meets all county requirements without the use of carbon scrubbers. Singer said the project meets all applicable policies and standards.

“How would we make the determination that the proposed odor plan isn’t working, that they need to go to carbon scrubbers? Who makes that decision and how?” asked Fifth-District Supervisor Steve Lavagnino.

Staff responded that new projects in Carpinteria Valley require quarterly monitoring for the first year. During these monitoring periods, staff will assess if the odor can be detected in residential zones, which would trigger an advancement in the existing tiered odor abatement response.

There are four tiers to the odor abatement plan. Level one includes a visual inspection equipment and implementing any corrective measures; level two includes weather analysis, a diagnostic assessment of the system, staff interviews and corrective action; level three includes odor control system testing, addition of carbon scrubbers, and a thorough analysis and report to planning and development and level four includes a Best Available Control Technology analysis and report.

Supervisor Bob Nelson confirmed with staff that carbon scrubbers are included in the existing tiered response system if the odor is not sufficiently abated through the lower tiers.

“The project before you today is a model project. It’s one of the two farms in Carpinteria Valley using the Benzaco/Fogco odor control system as its primary means of odor control,” Edwards said.

“The additional condition imposed by the Planning Commission and the subject of this appeal supplants this requirement and the recommendations of experts. It was not modeled on nor created for this specific project,” Edwards said. “It’s simply unwarranted and unneeded.”

Edwards argued the given one-year period to implement carbon scrubbers is too small a window and too onerous a task.

“Please do not change the goal posts on us in the eleventh hour. Our project not only complies with the county’s ordinance requirements, it greatly exceeds them,” Edwards said.

In response to supervisor questions, Edwards said the project is not a “significant contributor to the odor that is being experienced,” but that it isn’t realistic “to expect that there will never be odor, especially on the roadways in front of these facilities.”

He confirmed there had been 26 complaints against the project.

Carrillo, a longtime fighter against cannabis, requested supervisor deny the appeal, arguing the project should have carbon scrubbers. Assistant Head of School Charlotte Brownlee further said the tiered system does not work on behalf of complaints, and that Cate School repeatedly experiences cannabis odors.

But supervisors were less amenable to the carbon scrubbers requirement.

“The Planning Commission, I appreciate their intent, but they didn’t even know if [the condition] is implementable,” Williams said. “I believe we are on very shaky grounds if the county were to de facto create a requirement that we did not legislate, that we just ad-hoc-ed into an appeals process of this magnitude.” He suggested that the county pursue the mandatory implementation of carbon scrubber legislatively, rather than impose it upon an individual project.

Lavagnino agreed Williams, stating that while he understands the complaints lodged against the Benzaco/Fogco system, the project’s odor plan was ultimately compliant with all existing requirements.

“The applicant submitted an odor abatement plan. Staff determined it’s consistent with the requirements of our ordinance. A certified industrial hygienist has certified that the methods and equipment are consistent with accepted industry best practice,” Lavagnino said.

Hartmann asked staff why the county didn’t already have higher odor abatement standards; staff confirmed the current project is up to par with county requirements.

“I’m really struggling to go along with the law, even if the law is unjust,” Hartmann said.

The board ultimately approved Valley Crest’s appeal with four supervisors in favor, and Hartmann abstaining from the vote.