This Legal Cannabis Market Is Slowing Its Growth | Turn 420 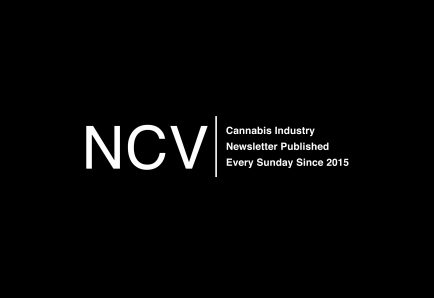 You’re reading a copy of this week’s edition of the New Cannabis Ventures weekly newsletter, which we have been publishing since October 2015. The newsletter includes unique insight to help our readers stay ahead of the curve as well as links to the week’s most important news.

Canada released its monthly data this week for July, indicating that cannabis sales in the country were at an all-time high of C$394.8 million, up 4.5% sequentially and up 17.8% from a year ago. While sales are growing, this is the lowest annual growth ever:

Based on 7 months of results and our projection, it appears that total sales will be approximately C$4.55 billion this year, up about 19% for the year compared to the C$3.8 billion in 2021.

This week, Canada also announced that it will review the program, which launched about 4 years ago, after a big delay due to the pandemic. Investors appreciate that cannabis is legal in the entire country, but they are probably not happy with the stock action. The NCV Canadian Cannabis LP Index has dropped 87% over the past three years and is down 56.8% in 2022: 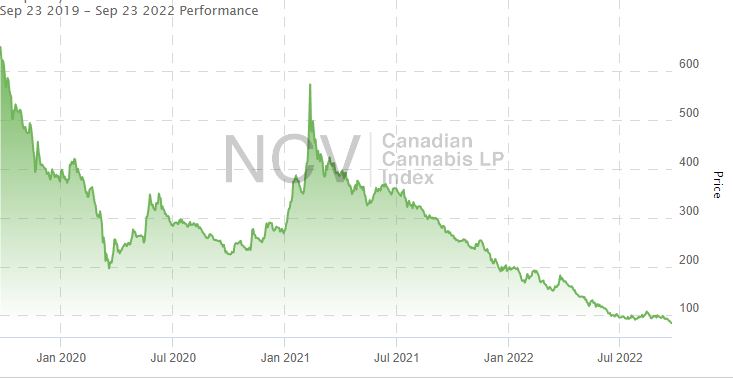 While the stock prices are down a lot, most Canadian licensed producers don’t seem like they are the best stocks to buy now. The valuations are generally higher in Canada, while the revenue, profits and cash flow are weaker than the American peers.

Unlike the American cannabis producers, the Canadian LPs don’t pay extra taxes (280E). They also seem likely to benefit from increasing legalization in Europe eventually and perhaps the U.S. too. Given their generally weak balance sheets, though, it’s not clear that they will be in position to capitalize on market developments.

We have cut out exposure to Canadian LPs at our cannabis investor subscription service, 420 Investor, where we own just two names currently in our model portfolios. Both have been performing well operationally and aren’t burdened with massive negative cash flow losses like peers. One has no debt and substantial cash, making it an acquisition target in our view. Both stocks trade below tangible book value.

The Canadian cannabis market has matured. It has several challenges still, and the one that could change is that the 10mg THC maximum per package may get improved. This would be an improvement, but it wouldn’t help the market that much. There are, in our view, too many LPs still. A bigger problem is that the provinces are typically the distributors. We don’t expect this to change.

Although we remain optimistic that the oversold securities will rebound in H2, we suggest that investors looking to buy into the sector consider ancillary stocks and some multi-state operators rather than most Canadian licensed producers.

Be sure that you have the latest updates by upgrading your NCV News App to the latest version today!

New Cannabis Ventures publishes curated articles as well as exclusive news. Here is some of the most interesting business content from this week:

TRP, which stands for “Tradition. Responsibility. Progress.,” began as a single-state operator, but has quietly and quickly grown to have a presence in 13 more states. Most of the growth has been organic and in an exclusive interview, Co-founder and CEO Brandon Johnson says he expects it will stay that way for now with plans to become fully national in the future. He also says the company intends to remain private for the foreseeable future. TRP recently entered the Florida market, opening the first Cookies dispensary there. The company spent two years building out cultivation, manufacturing, processing and distribution operations in the state. TRP plans to open more stores in Florida, and it is expanding its cultivation in the state.

Cannabis wholesale platform LeafLink has continued to scale throughout what has proven to be a challenging year for the industry. The technology company has been bundling together its solutions across its marketplace, payments, financing and logistics to offer its largest customers a way to run their businesses more efficiently. In an exclusive interview, Co-Founder and CEO Ryan G. Smith said the LeafLink team is looking for ways its customers can use more of the solutions it offers through its platform. It is focused on building customer engagement, adoption of new tools, and adding new leadership to its team.

Red White & Blue has named Colby De Zen as president and director and appointed Gabriel Bianchi to the board of directors contingent upon completion of regulatory approvals. The company also restructured the terms of certain outstanding debt. In his new role, DeZen will streamline operations to gain efficiencies across each state, and extensively monitor and implement internal controls on financial reporting/planning, direct and indirect expenses and capital expenditures. “By Q4, I intend to implement significant balance sheet improvements aggressively,” De Zen said.

High Tide closed a C$19 million senior secured credit facility with connectFirst Credit Union Ltd., with an initial 5-year term, at connectFirst’s floor interest rate. The company has been on a growth trajectory since it launched its discount club model in October 2021. It also operates 140 Canna Cabana locations across Canada, with 36 stores added to its portfolio year to date through organic growth and accretive acquisitions. Its goal is to continue gaining market share by increasing its store count to 150 by the end of this calendar year and to 200 by the end of 2023. “This credit facility from connectFirst will … give us the ability to pour even more fuel on the fire,” said Raj Grover, president and CEO.

Aurora Cannabis Q4 revenue remained flat sequentially at C$50.2 million and was down 8% from the same time last year. During FY 2022, international medical cannabis net revenue increased by more than 70% from fiscal 2021 and the company said it is beginning to see signs of stabilization in its Canadian adult recreational segment.

Get ahead of the crowd! If you are a cannabis investor and find value in our Sunday newsletters, subscribe to 420 Investor, Alan’s comprehensive stock due diligence platform since 2013. Gain immediate access to real-time and in-depth information and market intelligence about the publicly traded cannabis sector, including daily videos, weekly chats, model portfolios, a community forum and much more.

Use the suite of professionally managed NCV Cannabis Stock Indices to monitor the performance of publicly-traded cannabis companies within the day or over longer time-frames. In addition to the comprehensive Global Cannabis Stock Index, we offer a family of indices to track Canadian licensed producers as well as the American Cannabis Operator Index and the Ancillary Cannabis Index.

Stay on top of some of the most important communications from public companies by viewing upcoming cannabis investor earnings conference calls.

Based in Houston, Alan leverages his experience as founder of online community 420 Investor, the first and still largest due diligence platform focused on the publicly-traded stocks in the cannabis industry. With his extensive network in the cannabis community, Alan continues to find new ways to connect the industry and facilitate its sustainable growth. At New Cannabis Ventures, he is responsible for content development and strategic alliances. Before shifting his focus to the cannabis industry in early 2013, Alan, who began his career on Wall Street in 1986, worked as an independent research analyst following over two decades in research and portfolio management. A prolific writer, with over 650 articles published since 2007 at Seeking Alpha, where he has 70,000 followers, Alan is a frequent speaker at industry conferences and a frequent source to the media, including the NY Times, the Wall Street Journal, Fox Business, and Bloomberg TV. Contact Alan: Twitter | Facebook | LinkedIn | Email

Get Our Sunday Newsletter