The Tacky Weed Bodega Is Everywhere (for Now) | Turn 420 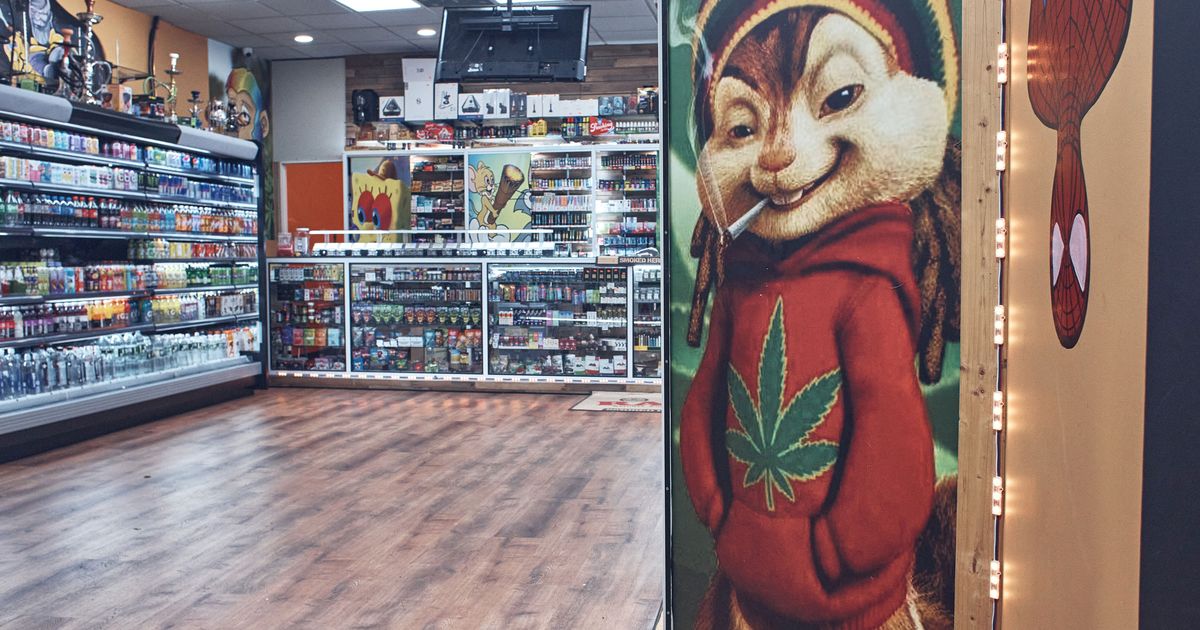 In May, a business entity called Convenience in Central Park Corporation registered an address in the ground-floor retail space at 200 Central Park South. Signage appeared to indicate the business would be selling tobacco, but the co-op board became convinced that at least one of the conveniences on offer would be weed. According to a lawsuit the board filed in August, such an enterprise, on the leafy stretch between the Plaza and Columbus Circle, would “detract from the dignity” of the address and violate zoning that bars any business “not in character with the district.”

If even Billionaires’ Row is fending off gray-market cannabis retailers, the city is truly experiencing a wave. In the year since recreational-marijuana possession and use were decriminalized in New York, it has started to feel as if the only new blood on any given pandemic-blighted retail block is a Blank Street Coffee or a place to buy weed and niche junk food. Because the city’s new Office of Cannabis Management has yet to distribute the licenses necessary for cannabis sales and neither regulators nor law enforcement is cracking down, these retailers operate in an exuberant but temporary state of semi-lawlessness. As one shop owner told me, “It’s Christmas.”

Among the new dealers, you can choose your fighter: a gallery on Rivington Street that grants you 3.5 ounces of “Space Rocks” with the purchase of a $75 NFT, the highly visible — and towable — weed truck, and more upscale enterprises offering memberships and the gloss of exclusivity (“We’re a social club,” the man working reception at a place called the Pot Shop in Greenpoint told me under a neon sign that read SMOKE EVERY DAY). But the one that feels most of its moment in these strange, early days of the New York City Kush Rush is the weed bodega: part smoke shop, part convenience store, part dispensary, all packaged in the aesthetic of a Monster Energy drink. Here, quick-acting entrepreneurs — some with convenience-store experience, others just looking to cash in — can try to make their fortune, at least until the state shuts them down.

The weed bodega is becoming a recognizable type. Look first for innuendo in the name: Vibez, Cloudz, Exotic, Fog, Puff. A kaleidoscope of imported snacks is a big giveaway — Korean potato chips, rare Fanta flavors, Spanish Cheetos in the shape of soccer balls — as is a giant inflatable blunt, provided by the rolling-papers brand Raw, sitting in many windows like a homing beacon. The décor is street-art juvenilia with a stoner twist and an adolescent raunchiness. At an “exotic snacks” store on the part of Fulton Street where Clinton Hill becomes Bed-Stuy, the guy behind the counter eagerly asked me to smell a nug of something labeled “Stripperella.” On the walls, the Queens-based graffiti artist Hugus, a kind of weed-bodega Banksy who has worked in 50 shops in the last year and calls his style “trippy cartoons,” has spray-painted Daffy Duck ripping a bong so hard his top hat has blown off and Rick and Morty swirling, heavy-lidded, in a cosmic sky above. On Nostrand and Dean, a store with the motto “Read and Weed” also features Rick and Morty in a mural next to volumes of Camus. In Greenpoint, across from the Pot Shop “social club,” the register is adorned with a red-lidded SpongeBob, and on a cute stripped-down spot in Chinatown, a yellow smiley face peeks out from a cannabis leaf next to a sign offering Mac and Cheese and Runtz blends.

The unregulated nature of the market makes it impossible to quantify how many weed bodegas are in business here. City data shows a brief but sharp spike in tobacco licenses post-decriminalization, but there’s no official count — just an ambient sense that there’s a weed bodega on every block. Despite the open secret, no one wants to talk, especially smaller shops fearful of a potential crackdown.

I met two brothers “in management” at Noise, a chain of nine cannabis stores in New York — the weed bodega gone corporate — who agreed to chat as long as I didn’t use their names. Like many sellers, they’re riding the gray-market wave while hoping to go legit when licensing opens up. As they showed me around their newest location, on a narrow slice of Canal Street nestled among fake Prada backpacks and Chanel bucket hats, they laid out their vision to become the fully compliant organic “Starbucks of cannabis.” The siblings have each applied for the first round of licenses in the “justice involved” category: 150 or so that the state says will go to New Yorkers with previous marijuana convictions. (The older brother, F, who presents as a benevolent kingpin in his Adidas tracksuit, said he had been tackled by a gaggle of undercover cops while smoking a joint outside NYU when he was 24.) They want to be among the first to officially open. “We want to be the model,” said F.

Neither brother was surprised that other owners wouldn’t talk to me. “Everybody’s scared,” F explained. Some illicit operators will be denied a license. Others will just shut down of their own accord. The regulated market here will entail tons of costs beyond licensing, which those waiting have heard will total $250,000, including security, safety, and more, even before sales tax. “You’re losing 50 to 60 percent by being legal that you’re paying for compliance,” said Earl McGhee, a consultant who works in cannabis distribution in California and has closely followed the situation in New York. According to a survey by the National Cannabis Industry Association, more than one-third of the nearly 400 businesses surveyed said they were not profitable. In the unregulated market, with none of that loss in profit, the weed bodega is a potential gold mine. One seller who asked not to be named told me he knows “many people” making up to $40,000 a day selling weed — most of which comes from California — wholesale and to individuals.

In this brief window of opportunity before a more sanitized version of New York’s cannabis store sweeps in — the California-based juggernaut Med Men, where customers swipe through products on iPads as in an Apple Store, already has a flagship on Fifth Avenue — weed bodegas will thrive. And as long as they are left to telegraph the nature of their business all but explicitly, so will their charming garishness.

Of course, not everyone is charmed. While cops and regulators have largely left the weed bodegas alone, co-op boards and neighborhood-watch types have become their own version of the city’s DEA. Brooklyn Heights residents recently protested neon signage featuring a grinning skull at Exotic Smoke Shop on Henry Street, saying it violated Landmarks Preservation Commission rules. “I can think of no greater affront to our community, and I hope their punishment is swift and harsh,” one wrote on Brooklyn Heights Blog. The sign was eventually taken down.

Do naysayers find the weed bodega offensive because of what it sells or what it looks like? “We’re not trying to hurt anybody,” the man behind the counter on Henry told me recently. He said people have come into the store to call him an asshole. “But people in this neighborhood smoke weed, so.”

Thank you for subscribing and supporting our journalism.
If you prefer to read in print, you can also find this article in the September 26, 2022, issue of
New York Magazine.

Want more stories like this one? Subscribe now
to support our journalism and get unlimited access to our coverage.
If you prefer to read in print, you can also find this article in the September 26, 2022, issue of
New York Magazine.