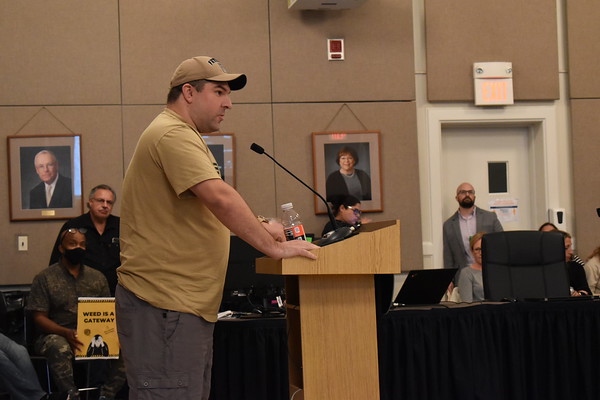 BRISTOL – Recreational cannabis sales shall be allowed within Bristol.

Council members voted to allow hybrid retailer sales, limited to two such dispensaries, in a four to three vote during a special City Council meeting Thursday night, after having listened to dozens debate the benefits and issues with the substance.

Several other amendments were made to further modify the ordinance but were voted down along the same voting member groupings.

The majority of residents during the public commentary portion of the meeting voiced their reasoning for not wanting recreational cannabis sales within Bristol, many citing concerns with increased potential access to children among those. Those in favor of recreational sales said it would provide for easier and more equitable access to those who needed it with a variety of medical conditions and that deliveries of cannabis products would likely come to the city anyway.

“Nobody is against medical,” Caggiano said. “I think the argument that you’ve heard from some of us tonight is that we believe the way the state set up this legislation, unfortunately, the medical business is not a viable business (model) and there’s not a likelihood that a medical dispensary could operate here. That’s somewhat factual, not a hundred percent. Nothing is a guarantee but that is really what we are debating right now on this amendment.”

City officials in previous ordinance hearings have said Bristol’s sole medical dispensary, Trulieve, may potentially leave the city should it be unable to compete with other dispensaries. Such businesses throughout the state are looking to become hybrid models as a standard practice. Trulieve desires to expand its business by relocating to the former Applewood Restaurant and Bar on Route 6, according to meeting discussions.

“Some call this an ultimatum. Some call it a necessary business decision,” Thibeault said. “If they leave, patients who need life-enhancing medications will suffer. Imagine telling a woman suffering the effects of cancer and chemo that she now has to drive to New Britain or Hartford to have her prescription filled, and I refuse to do that.”

Howe said he had several relatives who had careers in law enforcement and took their concerns into consideration and he himself utilized cannabis in an oil form as a medical patient to prevent his seizures. He said he had experienced watching cannabis prevent seizures in children as well.

“Being OK with medical is all well and good,” he said. “But if we (lose) Trulieve, they’re a business like anybody else. They’re profit. They’re not a nonprofit. That’s what they do. They’re going to go wherever they can make the most profit.”

Howe said he thought about the issue and how it could affect the patients getting their medication from Trulieve. He did not want to see those individuals lose their cannabis access.

Lusitani said she felt it was a parent’s role to educate their children about alcohol and drugs, was in support of free market principles and easy access for medical patients to cannabis. Therefore she was in favor of the hybrid recreational amendments.

Tyler said she was concerned with the potential uncertainties of rolling out recreational cannabis sales throughout the state; how they would affect area businesses;  youth coming into contact or ingesting too much of the substance; issues with police not being able to detect the exact amounts of THC in an individual’s system during traffic stops and more. She also criticized Thibeault for not resolving further ordinance amendment discussion through the ordinance committee.

Olsen said she was concerned that cannabis could be used as a gateway drug and cited a variety of other health concerns with the substance such as delayed motor skills as the result of its use, increased mental health issues in the community, contact with youth and more.

Panioto said he felt Trulieve may not have Bristol residents “best interests at heart” and was concerned how the company had reacted to residents potentially not wanting recreational sales in the community. He felt it was “disrespectful to the residents to try and railroad them and just bring this in as a hybrid location on Route 6.”

He proposed sending a potential ordinance to the Bristol Police Commission for further review.

Who will dispense medical marijuana in Alabama?