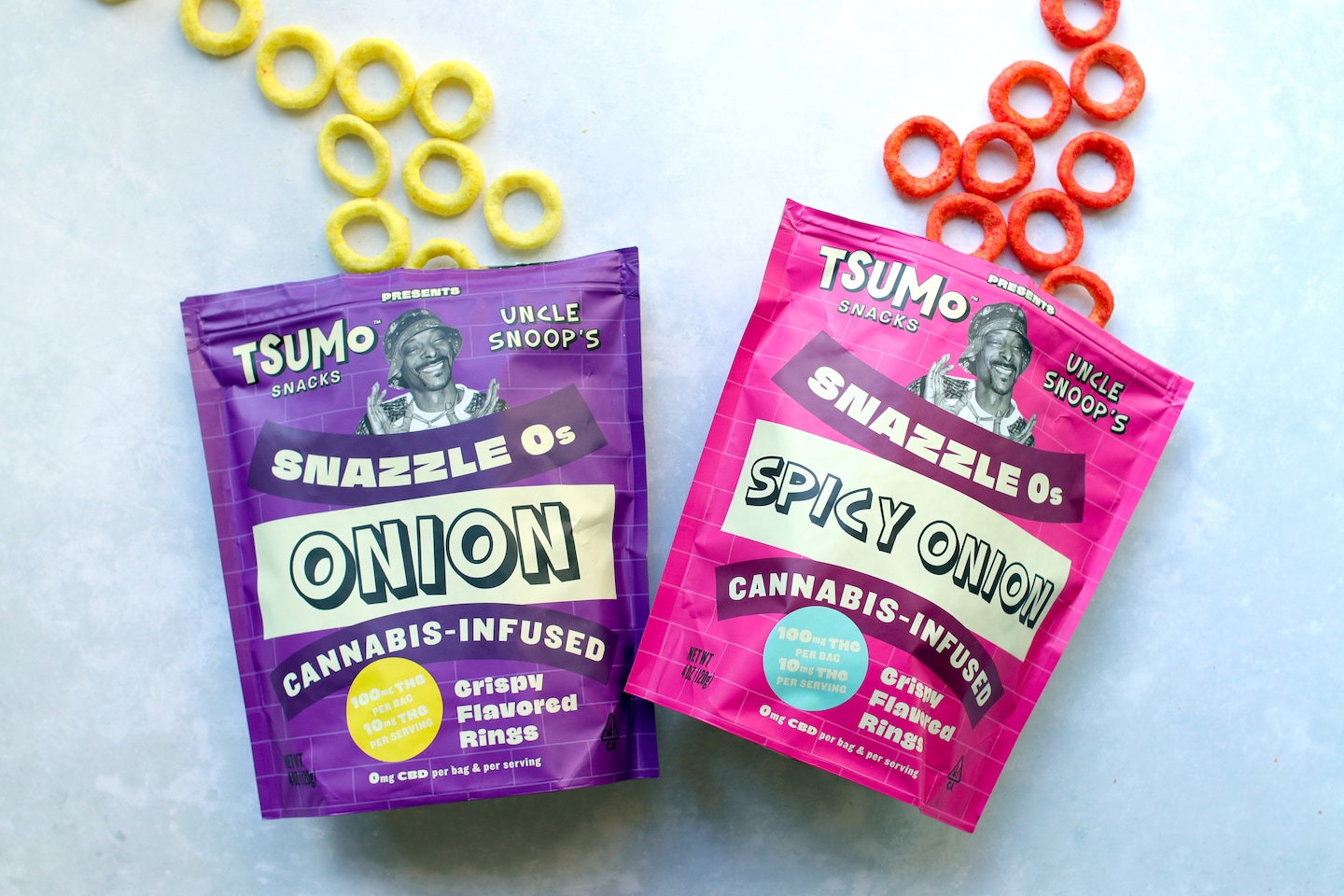 With songs encouraging listeners to “smoke weed every day,” perhaps no celebrity is more closely associated with marijuana than Snoop Dogg. Along with being a consumer of the substance, he is an investor, too, through Casa Verde, a venture capital firm focused on the cannabis industry.

Now the legendary rapper has partnered with TSUMo Snacks for the launch of Snazzle Os, cannabis-infused, crispy onion-flavored rings. TSUMo Snacks officially launched in September 2021 as a partnership between Casa Verde, which Snoop Dogg co-founded, and Redbud Brands, a venture studio.

“We had been kicking around the idea of doing edibles again and really wanted to get it right,” Snoop Dogg told The Washington Post via email. “The team at TSUMo Snacks … took the original vision and made it better than I had hoped.”

Dosed with a hybrid strain of cannabis extract, the snacks will be exclusively available at all California MedMen dispensary locations beginning Oct. 6 for two weeks before expanding to other dispensaries throughout the state.

If it’s legal where you live, the ultimate homemade pot brownie is all about the cannabutter

The company focuses solely on salty, savory snacks. The chocolate and gummy edible market is oversaturated, TSUMo Snacks co-founder and CEO Caroline Yeh said. “It’s really hard to compete in that space.” Savory edibles are more difficult to produce as well. The others out there? “They aren’t the best tasting and they’re not super well branded,” she said.

“When we had him try our products as an investor, one of the things that he said is that he actually was more of a Funyuns guy,” Yeh said. (TSUMo’s other offerings include various cheese puffs and tortilla chips.) “We’re like, all right, well, let’s make Funyuns.” The company tested seasonings and shipped samples to Snoop Dogg until they landed on a product that earned his approval.

The crispy onion-flavored rings are nostalgic for Snoop. “Man, Snazzle Os bring me back to when I was a kid hanging out with my friends,” he said via email. “We had the best times back then, running the streets and having fun. We’d go by the corner store and buy soda, candy, chips. TSUMo brings me back to those times.”

Snoop Dogg, who also has teamed up with 19 Crimes for a Snoop Cali Red wine, has previously claimed he’s not a fan of edibles. “Growing up, you didn’t know how much weed was in brownies, so once you took a bite, it was too late,” he said via email. Now, the snacks include dosage, so consumers know what they are getting. “The reason I like these is because of their low-dose effect,” he said. “They’re delicious.”

We decided to see if the rapper was just blowing smoke, so this reporter gathered a few tasters to sample Snazzle Os. The consensus: The chips taste really good. TSUMo’s original rings “taste like Funyuns, but more onion,” one tester stated. And the spicy version reminded us of Takis and Flamin’ Hot Cheetos. (“I like this one a lot,” said another tester who almost always asks for hot sauce when dining out. “I’m nervous because I want to keep eating it.”) Texturally, Snazzle Os are more crunchy, whereas Funyuns are more airy and crispy.

Our findings coincide with Snoop’s description. “As an adult with refined taste buds, I like that these have even more flavor and crunch,” he said. “There’s just more oomph, and don’t get me started on the spicy onion — oowee, that kick!”

The ‘poster child’ for social equity marijuana licenses looks to succeed, even against tall odds