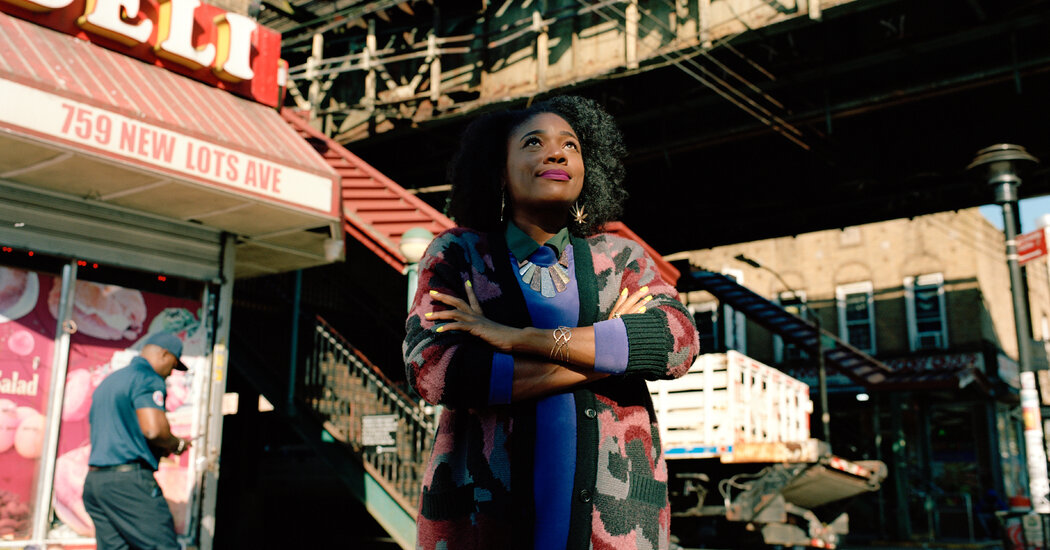 As a child growing up in East New York, Brooklyn, at the height of the war on drugs, Dasheeda Dawson became convinced that she wanted nothing to do with weed.

She was 10 when transit police officers began searching her backpack for drugs while she was on her way to school, Ms. Dawson said in an interview. As a teenager, she said she saw officers slam her friends to the ground over small amounts of cannabis.

She changed course completely in 2016 after the sudden death of her mother, a longtime cannabis user who had encouraged her to try the drug to treat health issues that left Ms. Dawson tired and in pain. Ms. Dawson left a corporate career and dove into the cannabis industry, enrolling first in a medical marijuana program in Arizona before eventually overseeing the industry in Portland, Ore., which included medicinal and recreational use.

Now, Ms. Dawson, 43, has returned home to lead Cannabis NYC, the city’s effort to support entrepreneurs and workers seeking entry into the sector. As the founding director, she will head a small team charged with corralling city services to help build sustainable cannabis businesses, including helping entrepreneurs to apply for licenses, access financing opportunities and navigate municipal regulations.

Ms. Dawson said she is eager to put all her experience to work for her home city. “To come back and lead the industry is just a full circle moment for me,” she said.

Ms. Dawson, a Princeton University graduate and former executive of Fortune 500 companies, has become a fierce advocate for the legalization of marijuana with a focus on using it to address health disparities and repair the damage to people and neighborhoods that were subjected to mass criminalization. After leaving corporate America, she crisscrossed the country as a consultant advising cannabis businesses and lawmakers considering legalization, including in New York.

Her role as New York City’s first cannabis director is key to fulfilling a central goal of legalization in the state: absorbing the illicit market with persuasion and incentives instead of punishment.

“We knew we needed to fill this role with someone who was an expert at everything from the needs of entrepreneurs in this space to the lived experience of New Yorkers harmed by the ‘War on Drugs,’” Mayor Eric Adams, who appointed Ms. Dawson, said in a statement.

It is a task imbued with historical weight. In 1973, New York was the first state to enact laws prescribing tough penalties for petty drug offenses, including the possession or sale of small amounts of cannabis. Enforcement was heaviest in New York City, where heavy-handed policing fueled arrests concentrated in mostly poor, Black and brown neighborhoods.

The so-called Rockefeller drug laws, named after then-Gov. Nelson Rockefeller, have been dismantled and replaced with addiction treatment and criminal diversion programs, and marijuana arrests have become rare in the city. But distrust in government remains high.

Part of Ms. Dawson’s job will be figuring out how to bridge that divide. Lauren Rudick, a cannabis lawyer at the firm Hiller PC, said the role will require a lot of listening, compromise and flexibility from Ms. Dawson, who will need to work with a wide variety of interest groups, including the powerful real estate lobby, to be successful.

“I haven’t seen a track record of her collaborating with so many different types of stakeholders, but there’s no question that she has been so successful in mobilizing the equity conversation,” she said.

Ms. Dawson, the second of four sisters, excelled at school and was admitted to Princeton, where she studied molecular biology before earning a master’s degree in business administration from Rutgers University in 2011. She later held corporate management roles at Target and L Brands, the parent company of Victoria’s Secret.

She started using cannabis a few years after the birth of her son, Jordan Harmon, now 19, to treat symptoms of fatigue and pain that doctors later realized stemmed from an autoimmune disorder.

Ms. Dawson said she was fearful that using cannabis could derail her career. She kept it a secret until her mother died unexpectedly in 2016 from liver cancer. Her mother, a housing activist who regularly smoked with her friends, used cannabis to alleviate the side effects of chemotherapy.

Ms. Dawson, who had been on a path to becoming a corporate vice president, then reassessed her life, she said. “When my mom died, I think it was just not enough,” Ms. Dawson said.

In Arizona, where there was a medical marijuana program, she found relief and a calling. She branded herself as “the Weedhead” and wrote a self-published workbook for entrepreneurs while also consulting for businesses, government bodies and advocacy groups.

In 2020, she took the job in Portland, becoming deputy director of community and civic life and overseeing cannabis licensing, a community reinvestment grant program and an emergency financial relief fund for businesses.

In Portland, a liberal bastion that is one of the whitest major cities in America, the legal cannabis industry had been set up before her arrival. In her home city, Ms. Dawson will start from scratch with a much more racially and politically diverse constituency, in a place where the illicit market is more sophisticated and entrenched.

Despite the differences, she said some initiatives she spearheaded in Portland are relevant to her new job, like the relief fund, which became a lifeline for cannabis businesses during the pandemic. Her office also created a Cannabis Empowerment Day to show support for the legal industry and combat what she called persistent “cannaphobia.”

Her new role, she said, is “my opportunity to come home and make good, finally, on the things that I’ve been working on for the last almost seven years.”

Jesse Campoamor, a consultant who served as an adviser to former Gov. Andrew M. Cuomo during the legalization debate, said Ms. Dawson’s experience with cannabis is an advantage for the city.

“She’s taking a running start into an industry where the conventional bureaucrat would need a bunch of primers and need a lot more time just to get themselves up to speed,” he said. “And I think that just puts us in a better position overall.”

When Ms. Dawson was born in 1979, 85 percent of the state prison population was from East New York and six other neighborhoods, where they were largely arrested on drug-related crimes, according to a landmark study.

Even after the state’s harsh sentencing laws were dismantled, East New York still had higher arrest rates for marijuana possession than all but one other neighborhood between 2010 and 2017, according to the city comptroller.

Enforcement was most intense in the city’s housing developments.

Bishop Mitchell G. Taylor, a pastor in Queens who runs Urban Upbound, a nonprofit that works to create opportunities for residents of the Queensbridge Houses, said the city needs to make sure programs are available for NYCHA residents to obtain the skills to enter the cannabis work force.

Those who have previously worked with Ms. Dawson expressed confidence in her ability to handle the challenge.

Chris Alexander, the executive director of the state Office of Cannabis Management and the lead writer of the cannabis legalization bill, said that Ms. Dawson’s experience as a patient, an activist and a regulator, coupled with her scientific knowledge, made her an effective advocate for legalization.

“The fact that she’ll be supporting us at a municipal level is very comforting to me,” he said.

Ms. Dawson said her work boils down to helping people in the communities like the one where she grew up benefit from legalization.

“It is real trauma that I’m looking to repair for myself and a lot of people,” Ms. Dawson said. “I’m looking to demonstrate that New York State has the capability to get it done.”

Kamala Harris, I’m begging you to stop talking about marijuana