Michigan marijuana poses problem for climate. Some hope to find a fix | Turn 420 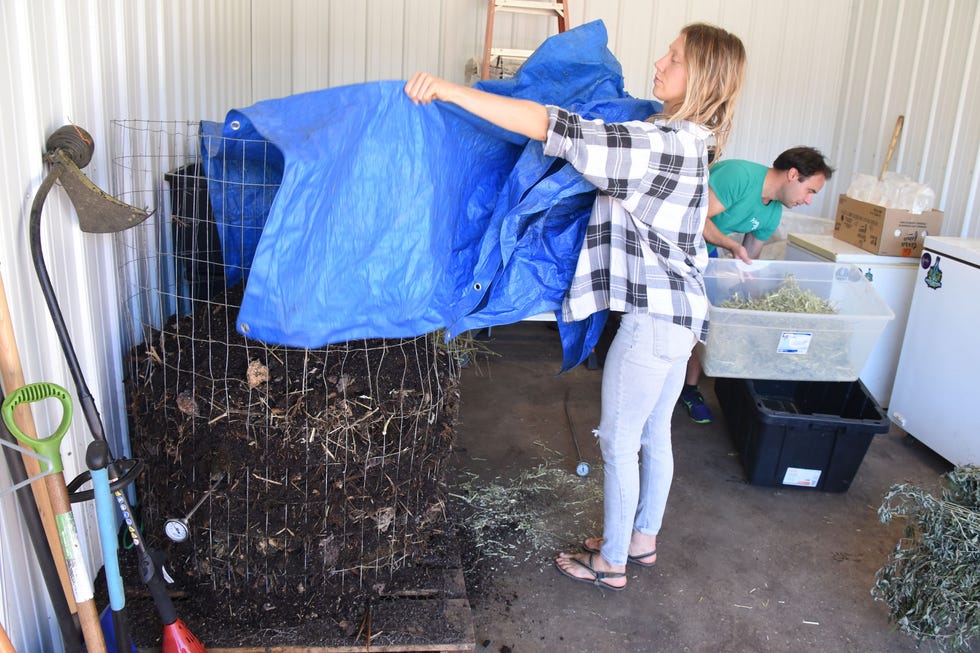 When Michigan cannabis growers collect the good stuff for gummies, brownies and any number of smokable products, harvest time ends with a big pile of stalks, root balls and discarded plant waste.

That leftover green is trashed at many Michigan facilities, said Ross Kangas, a cannabis cultivator with Hypha Organic in Kalkaska.It’s chipped up with other material, sometimes plastic trash, and sent to a landfill.

But at Hypha, that leftover green is gold. The team composts their post-harvest plant waste and turns it into a valuableamendment that helps the next round of plants thrive.

“A lot of these facilities out there, they only look at the organic biomass as waste, where we look at it as so much more than that,” Kangas said. “It’s our fertilizer for our plants, and it has the hormones, the nutrients, everything that it takes to grow a plant. It seems like such a shame to waste a resource like that.”

When it’s landfilled, plant waste breaks down and releases a powerful greenhouse gas called methane. It contributes to climate change and threatens Michigan’s chances of building a carbon-neutral economy.

The cannabis industry creates a lot of plant waste, said Aaron Hiday, Michigan Department of Environment, Great Lakes and Energy compost program coordinator. The booming industry shows no signs of slowing down — he estimated cannabis growers will generate enough organic waste in the next few years to double the amount of material composted at licensed yard waste facilities in Michigan.

That’s why Michigan’s recycling and compost industry and eco-minded cannabis growers are rallying behind efforts to relax existing rules that make it tough to send cannabis plant waste to compost facilities. But composting cannabis isn’t easy.

Growers have to chip plants with something else, like soil, cardboard or plastic, until it’s “unusable and unrecognizable” before sending it away to a licensed compost facility, like the kind that accepts yard waste or food scraps.

“A lot of this industry has young, environmentally conscious people, and they want to do right but they have two big hurdles,” he said. “There’s little infrastructure to support them so they may have to try and do it themselves, or they basically just don’t know what’s out there. And the composting industry is not ready for the amount of organics that we’ve got. But it could be.”

A coalition of Michigan composters — the sorts of facilities that turn leaves and sticks into nutritious dirt used for landfilling and gardening — is promoting an effort to reshape Michigan’s rules for cannabis disposal. Eco-minded cannabis growers also are rallying behind the effort.

“There was a group of composters that said there’s a huge demand from the cannabis industry which is producing tons of organics, and they can make money off of it,” Hiday said. “But there’s these rules that say ‘Oh, you have to mix it 50-50 with another waste stream before it even leaves the marijuana facility.'”

Chipping up cannabis material and rendering it “unusable and unrecognizable” should be the composters’ job, they argue.

“Everybody’s ready to do it,” said Fred Thompson, CEO of Indian Summer Recycling in Casco Township. “At the moment, I’m told that what (cannabis growers) are doing is grinding it, putting it with dirt and sending it to landfill, which may be the most inexpensive way to do it. It may not be the best way to do it according to the environment. But you know, much of how this gets disposed of is going to be determined by the state.”

There are a pair of bills in the state Legislature that would relax some of the rules required for composting cannabis material. Among other changes, they would prohibit the Michigan Cannabis Regulatory Agency from writing a rule requiring facilities to combine marijuana plant waste with other products to make the marijuana plant waste unusable or unrecognizable.

The Cannabis Regulatory Agency and groups representing the recycling, composting and cannabis industries voiced support for the bill. There were no opponents. The House approved the two bills in June, but they are awaiting Senate action.

“These cannabis growers and manufacturers are using every part of the plant that they can to produce products,” O’Brien said. “What they’re leaving behind is really an organic waste that doesn’t belong in landfills. We don’t engineer big holes in the ground to protect the world from root balls, right? Let’s find a different way to use them that is much more beneficial.”

Even if the regulations ease, it will take the composting industry time to beef up in a bid to accept the glut of material that comes from marijuana growing, EGLE’s Hiday said.

“I don’t know if it’s so much regulatory (issues) as it is education, resources and viability,” he said. “I think everyone would love to do it if they knew how.”

The Cannabis Regulatory Agency created a workgroup to provide suggestions on sustainability issues in the marijuana industry, including waste.

Adam Duke, director of sales and client relations at Six Labs cannabis company, is a member of the workgroup’s waste subcommittee. He and other subcommittee members are determined to see less trash go to landfills.

“The amount of waste in the cannabis industry is insane, as a whole,” he said. “One of the definite, definite low-hanging fruits is the plant waste.”

The state regulations are one hurdle, Duke said. They “could absolutely be more lax” and open the door for more facilities to accept cannabis material, he said.

“It is very difficult for the industry, for most grows, to have anyone come and pick up their plant waste,” Duke said.

But regulations aren’t the only hurdle. Composting needs to be cost-effective compared to landfilling, and growers have to understand it’s an option.

“Literally any other industry that you know, growing any other crop, they don’t throw away their leftover plant material,” said Chandler Michalsky, operations manager of Wormies Vermicompost in Grand Rapids, which is working on getting approval to compost cannabis material and likely will start doing so next year. “That’s just unheard of, like, absolutely insane, that they’re not at least using that to feed livestock or something. Absolutely insane to be sending that to the landfill mixed with plastic.”

Cannabis growers are allowed to compost at their facilities so long as they follow these rules: There are no residual chemicals in the marijuana waste, the waste is “completely contained” within a container or building, the finished compost is used on-site or disposed of and the state approves.

“We use cannabis to grow cannabis,” Kipper said.

Takeaways from Our Conversation on Cannabis Risk Management