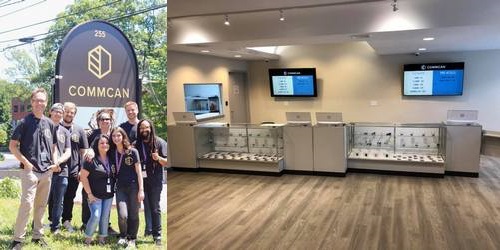 Above: CommCan opened its doors in July of 2018. It looks like they’ll be closing them sometime in 2023. (images from company’s Facebook posts)

The Marijuana dispensary in town will be closing up shop (at a date still TBD). That will impact the Town’s revenue stream going forward. And based on past Town Meeting votes unfriendly to marijuana businesses, there are definite challenges for a new business to fill the void.

On December 30th, ConCamm gave the Town notice that it will be relocating its Medical Dispensary in Southborough to Rehoboth.

[It turns out that I’m the one who gave the staff notice when I called to find out when they’ll be closing.]

I followed up with CommCan’s President Ellen Rosenfeld to find out what the timeline is for Southborough’ doors closing. She told me that she is still waiting to hear back from the state’s Cannabis Control Commission about when she can add make the move. [She had been hoping to determine that timing before informing staff of the change. Oops!]

In 2016 and 2017, Southborough voters passed laws that will limit the ability for a new business to take its place in town. (They also made it less friendly for CommCan to run a business here.)

CommCan’s location is greater than 500 feet from but less than 1,000 feet from the public school campus for Neary and Trottier. That was a big source of contention in 2016 when the facility’s sought its permit from the Zoning Board of Appeals. It sparked a petition and many passionate speeches from concerned parents to Town officials, especially residents from a nearby neighborhood. Over their objections, the ZBA approved the permit Board of Selectmen voted “non-opposition” to the dispensary and negotiated a financial agreement to profit off of the operation.

That spring, upset voters passed a zoning bylaw further limiting the areas of town where a Medical Marijuana dispensary can be located. To the chagrin of vocal opponents, it was too late for that to retroactively ban CommCan. But it will impact any business that tries to fill the market void. Under the bylaw, a new owner can’t open in the current location.

Further, the facility must fall within one of the following zone districts: Highway Business, Industrial Park, or Industrial District. There is no posted map to identify the specific lots that fit the requirements, but voters were assured they existed. (And the Attorney General’s office would have rejected the bylaw if they didn’t.)

For a business that meets those and other requirements, they can seek a special permit, but it will only be good for two years before they have to go back to the ZBA for a renewal approval. And they will have to stick to medical sales only. After state voters legalized Recreational Marijuana sales, Town Meeting voters banned those sales, and related businesses, from operating in Southborough.*

The bylaw passed by Town Meeting in 2017 prohibits:*

The operation of any marijuana establishment as defined in MGL c. 94C, § 1, including without limitation a marijuana cultivator, marijuana testing facility, marijuana product manufacturer, marijuana retailer or any other type of licensed marijuana facility is prohibited in all zoning districts of the Town.

That didn’t apply to “the sale, distribution or cultivation of marijuana for medical purposes”. (Although I strongly suspect the majority of TM voters at that time would have prohibited those uses if they were able to under state laws.)

It’s worth noting that while the dispensary coming to town still caused a stir with some commenters when it finally opened in July of 2018, by that fall it seemed as though residents had moved on. There was little reaction when I reported about an apparent discrepancy between restrictions to edibles in the permit granted by the ZBA and the products marketed and the fact that neither the then-Zoning Commissioner or then-Police Chief believed policing the items sold fell within their purview. (There were some comments, mostly debating whether I should have posted the story.) But I didn’t see or hear about any residents pushing officials to make any changes.

I don’t know how much revenue the Host Agreement with CommCan has provided in recent years. The last time I looked into it was in 2020, when they paid $56,182.63 for that fiscal year.

*[Editor’s Note: I am confused by the fact that I can’t find reference to a subsequent ballot vote to validate the law, although at the time, Town Meeting was told that would be required. I will update when I get clarity.]