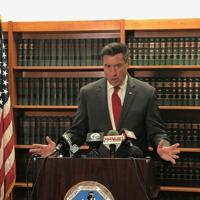 For Erie County District Attorney John Flynn, it was one of the least known and least explained provisions of New York’s marijuana legalization effort.

“It was one of those things that was buried in the marijuana legislation,” Flynn said. “You know dispensaries and all that was the talk of the town, but individuals who had certain charges (for marijuana possession) in the past, would be able to have them expunged.”

Expungement means that a person’s arrest, their court case and their conviction are treated as if they never happened. Charges that are expunged will not appear or show up on a criminal history background check, they cannot be used against an individual when applying for housing, student loans or a job and they won’t be found by law enforcement unless a person is applying for a gun license or a job in law enforcement.

If a job or school application asks if a person has been convicted of a crime, or arrested, that person can truthfully answer, no.

Under the 2021 law, most individuals with misdemeanor-level marijuana convictions will see those crimes removed from their records automatically. Misdemeanor convictions general involve the possession of 16 ounces of pot or the sale of up to 25 grams of marijuana.

The state Department of Criminal Justice Services (DCJS) has until 2023 to seal those records and individuals with those convictions don’t need to take any action on their own. DCJS says they will complete the automatic expungement requirements on time.

But if someone doesn’t want to wait for DCJS, Flynn said they don’t have to.

“If you don’t want to wait 2 years, you can bring a motion in court and we can do it right away,” the Erie County DA said.

Certain felony level marijuana possession convictions can also be modified under the new law. Those changes require the filing of a motion and a court hearing.

“There are different layers when it comes to expungement,” Flynn said. “If it’s not connected to other crimes or not part of a pattern of repeat offenses, you may be able to reduce a felony to a misdemeanor.”

So far, Flynn said he has not seen expungement motions filed under the new marijuana law. So he has begun a series of community outreach sessions, called expungement clinics, in the Buffalo area.

The purpose is to educate residents about eligibility requirements and help those who are legally entitled to have marijuana-related convictions removed from their criminal record.

“Now that New York has legalized recreational cannabis, we must act on behalf of the people whose lives have been unfairly impacted by a marijuana-related conviction on their criminal record,” Flynn said. “In particular, African Americans have been disproportionally impacted by the criminalization of cannabis, which has hindered their pursuit of certain opportunities in life. I hope to give a fresh start to our citizens who have been living with these criminal convictions by offering legal support to expedite the expungement or reduction process.”

Niagara County District Attorney Brian Seaman said he is allowing the state to move forward with the automatic expungements.

“There are a set of convictions that are automatically expunged,” Seaman said. “And then there are sections of the law dealing with possession of larger amounts (of marijuana) that would indicate (an intention to sell). Those would require a motion before the court.”

Seaman said he doesn’t anticipate a flood of those types of legal filings.

“We haven’t had a large number of large (volume) marijuana cases,” he said.

The New York State United Court System has established a web page which outlines how marijuana conviction expungement works and even provides a sample form to file in court to speed up the expungement process. It can be reached at https://www.nycourts.gov/courthelp/Criminal/marihuanaExpunge.shtml