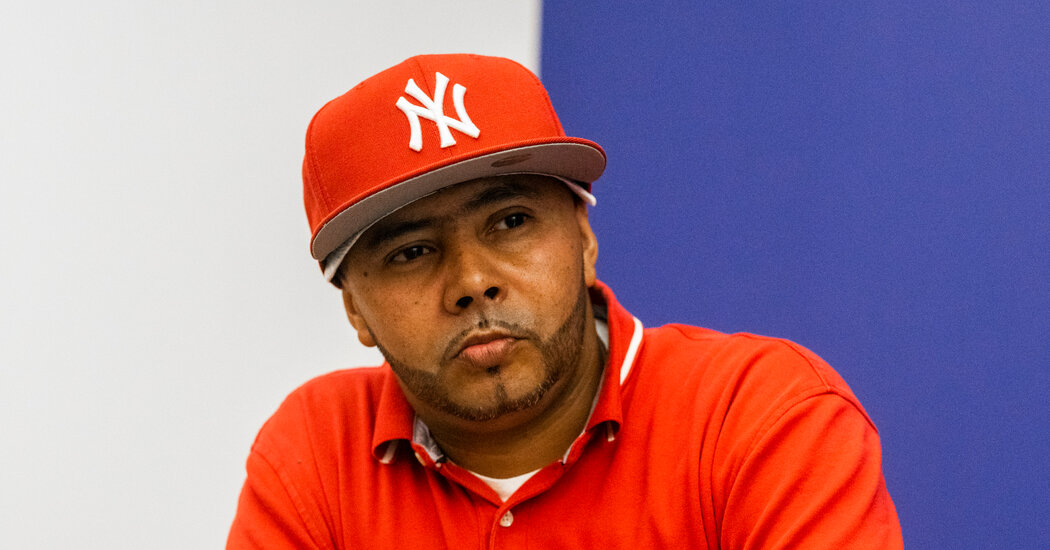 Anytime the police approached the street in the Bronx where Hector Bonilla used to hang out, his friends would toss away their marijuana on the ground, he said.

The police would pin the drugs on whomever was closest, Mr. Bonilla said. That is how he ended up with two convictions for marijuana possession in early 2000, he recalled, for weed he maintains was not his.

Mr. Bonilla, 42, a taxicab driver, said his criminal record haunted him for years and made getting work difficult. “Now, over 20 years later, it’s my free ticket to this,” he said, pointing to a laptop screen.

Mr. Bonilla was applying for a license to open one of New York’s first dispensaries to legally sell recreational cannabis. The four-year licenses are reserved for business owners who have been convicted of marijuana-related offenses in a New York State court, and will allow them to sell cannabis to any adult as early as this year.

The licensing effort aims to atone for the damage inflicted during the war on drugs, which has been criticized for targeting communities of color and focusing on drug use as a crime and not a public health issue. Despite similar levels of use across races, Black and Latino residents have been swept up on low-level marijuana charges at higher rates than their white peers.

Lawmakers legalized cannabis last year with a focus on social equity, the idea that policy should address past harms and eliminate hurdles that prevent some people from accessing opportunities. There are growing concerns, however, that the licensing process has been more difficult than expected and left eligible applicants without support.

About 500 applications had been submitted by Sunday, according to lawyers working with applicants. Hundreds of ineligible people have been turned away, but so have dozens more who did qualify and needed help navigating the state’s online portal.

State lawmakers also allocated $50 million to launch an investment fund that aims to draw money from the private sector and provide applicants with turnkey properties and start-up loans. But so far no spaces have been leased, no contractors have been hired to build them out and no additional money has been raised toward the fund’s $200 million goal.

“Where is the money? Where is the support?” said Regina Smith, the executive director of the Harlem Business Alliance, a nonprofit promoting Black entrepreneurship that has helped several license applicants. “We want to be in position to get out there first. But the way it’s unfolding now, it’s highly unlikely.”

State cannabis regulators plan to issue 150 recreational licenses this fall, including 70 in New York City. An additional 25 licenses will go to nonprofits serving people who have been arrested or incarcerated.

New York’s approach to dispensary licensing differs from other states, which have either barred people with certain criminal convictions or set aside a portion of licenses for people affected by the drug war. It is the first state to put those who were punished for marijuana offenses ahead of everyone else in the application process for owning dispensaries.

New York’s cannabis industry is expected to grow to include some 900 retail licenses and generate $4.2 billion in revenue by 2027, according to an industry report.

Patrick Phelan, the former chief of police in Greece, a Western New York suburb of Rochester, and the executive director of the New York State Association of Chiefs of Police, said that putting people with convictions ahead of people who had not broken the law seemed “unfair.” His organization opposes legalization over traffic-safety concerns and does not have an official stance on the licensing efforts.

State officials said they would not disclose how many people had started or completed applications for adult-use dispensary licenses before the Monday deadline. Applications doubled over the last week, from less than 250 on Monday to about 500 on Sunday, officials said.

“I’m really feeling like New Yorkers saw that we decided to take a different approach and they have supported it,” he said.

New York legalized recreational cannabis in March 2021, but for six months Gov. Andrew M. Cuomo tussled with lawmakers over who should lead the newly created Office of Cannabis Management and its governing panel, the Cannabis Control Board.

After Mr. Cuomo resigned amid sexual harassment accusations, Gov. Kathy Hochul appointed Chris Alexander, a native of Queens, and made Tremaine Wright, a former Assembly member from Brooklyn, chairwoman of the control board.

Cannabis officials have been crisscrossing the state since January holding public forums to explain new regulations and expedite the first recreational dispensaries.

The Dormitory Authority, the state agency in charge of preparing the retail outlets, said it had identified at least 50 spaces that could be turned into dispensaries as well as firms that could design the storefronts. But the work was delayed until last week, when the cannabis board approved a private firm as manager of the investment fund.

Ms. Smith said the state needs to devote more funding and resources if it is serious about addressing the affects of the war on drugs.

“Absolutely, it should be billions of dollars,” she said. “Out of a $220 billion budget, we’re not talking about a lot of money.”

State lawmakers said that while reports of glitches and delays sounded concerning, they were to be expected, and officials expressed confidence in cannabis regulators.

Liz Krueger, a state senator from Manhattan who was a main sponsor of the legalization bill, acknowledged the effort was imperfect but said that lawmakers could adjust as the market took shape.

“No other state has been willing to go as far as we are in trying to make sure we successfully create a mom-and-pop model of cannabis sales and production and growing that is open to a much more broader universe of people, and people of color who have been exposed to the harms of the drug war and enforcement of criminal activity,” she said.

Regulators are hoping to attract license applicants who have been significantly affected by marijuana prohibition and who also have the strongest chances of succeeding. Aside from the conviction requirement, successful applicants must have owned and operated a business that has made a profit for two years.

Stephanie Schuman, a lawyer whose practice focuses on cannabis, said the application questions were straightforward, but that the process was tedious and the state’s online portal could be difficult for applicants to navigate.

“Quite a few have called my firm in the past couple of days, frustrated and panicked because they’re stuck,” she said.

Until recently, the more labor-intensive work of assisting applicants had fallen to nonprofit organizations and law firms, some of whom charge more than $10,000 with no guarantee of success.

Last month, Mayor Eric Adams of New York announced that his administration would provide free assistance to people exploring the cannabis business. The program, Cannabis NYC, fielded more than 1,300 inquiries about the dispensary licenses; as of Friday, officials had determined that 145 people were eligible, according to the Department of Small Business Services.

Lawyers at the Bronx Cannabis Hub, a partnership between the Bronx Defenders and the Bronx Community Foundation offering pro bono legal assistance, said they had screened more than 500 prospective applicants. Most did not qualify.

About 70 people could provide documents showing they met the criteria, but the legal clinic could only accept 40 as clients, according to Eli Northrup, policy counsel for the Bronx Defenders.

The clients were mostly men and they ranged in age from their 20s to their 60s. They were everything from auto dealers to contractors to owners of day care centers.

As of Sunday, only 22 had submitted their applications. Hub lawyers said the scoring process offers no incentive for filing early.

Coss Marte, 36, who had filed early, seemed like a strong candidate. Police had arrested him for selling drugs six times before federal authorities swooped in and sent him to prison. Body-weight workouts he had developed in solitary confinement inspired him to create Conbody, a fitness program, and hire instructors who were formerly incarcerated.

Over the summer, he and his business partners drove four hours to central New York to visit Tricolla Farms, one of dozens of farms licensed to grow cannabis in the state. They hoped to reached a preliminary agreement with the owners to buy inventory if their cannabis company, Conbud, receives a license.

Mr. Marte said that based on harvest and sales projections he has seen, the supply of cannabis coming from farms in New York may fall short of demand. “My worst fear is that we get a license and have a great first couple of months, then we run out of inventory,” he said.

On a recent afternoon at the Hub, Howell Miller, 52, waited for a lawyer to review his paperwork. He said he was eager to jump-start the legal market in the Bronx, where he started packaging marijuana when he was 10 years old.

In 2005, he was arrested after he shipped a package of marijuana from Arizona to New York. He pleaded guilty to possession with the intent to distribute, and was sentenced to 18 months in prison and three years of probation.

After his release, he started a construction company that grew to 23 employees. But the business folded after he returned to prison in 2012, this time under a federal conviction for smuggling more than 11 tons of marijuana from Mexico to New York over a decade. Mr. Miller was released from prison in January.

Mr. Miller, who is eligible for a dispensary license because of his state conviction, said that the legal market offered him the opportunity to make money doing something he was good at without having to look over his shoulder.

“I used to sell illegally and make millions,” he said, adding: “I’m a good businessman and a terrible criminal. So let’s do it legit now.”

In another room at the Hub, Mr. Bonilla, the taxi driver, said his anger over his conviction had made him a believer in social justice. Now, he said, he wanted to help show that the state’s program can work. He also wants to be able to pass on what he builds to his son, who sat next to him watching anime on a tablet computer.

“I have something to prove,” he said. “I want to do a good job because to take this opportunity and be grateful for it and actually do good, it could show a lot. People could do this if they have a lot more opportunity. I really believe that.”