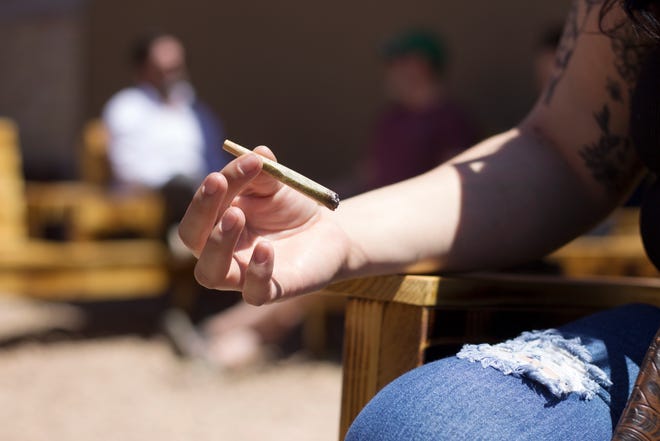 LAS CRUCES – Sol Cannabis, a business on East Idaho Avenue which sells adult-use cannabis and operates a licensed consumption lounge, said it will stop allowing patrons to use cannabis on its outdoor patio to comply with city law. The business told the Sun-News a “misunderstanding” led Sol to believe its actions were code-compliant since the business passed city inspection and the city, they claim, was aware of their activities.

City of Las Cruces staff denied the business was ever given the okay to operate an outdoor lounge.

Sol Cannabis, a business which opened in the building which used to house Si Italian Bistro, became the first cannabis consumption lounge in the state after sales of adult-use cannabis became legal in April. On 4/20, soon after the lounge first opened, Sol hosted an event to celebrate legal marijuana in which customers were observed smoking cannabis in the inside and outside portions of the lounge area.

The outdoor consumption was no secret. The consumption lounge generated significant media coverage when it opened and on 4/20.

But City of Las Cruces Senior Planner Katherine Harrison-Rogers told the Sun-News on April 20 that codes enforcement had visited Sol that day and determined “all activities were indoors” and “by our investigation, everything appeared compliant.”

The state’s Cannabis Regulation Act allows for both indoor and outdoor consumption areas, though individual cities and counties are allowed to impose stricter regulations within their borders.

The city is only discussing allowing outdoor cannabis consumption businesses. Cannabis use in public, such as on sidewalks, is illegal under state law and would remain illegal.

It was during Thursday’s meeting when Ponschock and Burke said they became aware of their noncompliance.

“We were not actually aware that outdoor consumption wasn’t allowed,” Burke said. “When we went through the licensing through the state — it is allowed at the state level. And then we got our city business license, and we had disclosed that we were going to do that.” The duo said they passed the city inspection process to operate.

“Moving forward, we’re not going to have that outdoor consumption because now we know we’re out of compliance,” Burke said.

The Sol partners spoke favorably about allowing outdoor consumption areas during the meeting and offered their business as a spot where local officials could observe a working consumption area and identify potential issues in real time.

Ponschock said since “people are out on the main drag with a beer in their hand” in Las Cruces, it’s only reasonable to allow the cannabis industry to enjoy the same privilege for its customers in some way.

On Friday, Harrison-Rogers denied the city ever gave Sol the green light to allow outdoor consumption and indicated the city was unaware of its activities.

“To our knowledge they are not operating an outdoor consumption area, nor has the City ever indicated they could,” she said in a statement. “They do have an outdoor patio. Codes Enforcement has heard rumors of such violations, but has seen no evidence of outdoor consumption.  We will continue to investigate the issue.”

“We’ve been inspected, the city knows exactly what’s going on and what we’ve been doing as a facility,” Ponschock told the Sun-News. “The state knows and knows how we flagshipped this.”

The Sol partners told the Sun-News a codes official who visited the business told them he wasn’t fully aware of all the rules but indicated they were in compliance. They expressed they think the city’s lapse in enforcement was unintentional and more attributable to a “huge misunderstanding.”

Moving forward, Burke said the business is happy to work with the city to demonstrate how to operate an effective outdoor consumption space. Customers can still use the outdoor patio at Sol, but they’ll need to use cannabis indoors.

“We’re going to help the city … If we need to help prove this concept, then we will, and we’ll do whatever we need to,” Burke said. “But we’re going to make sure we’re in compliance.”

Michael McDevitt is a city and county government reporter for the Sun-News. He can be reached at 575-202-3205, mmcdevitt@lcsun-news.com or @MikeMcDTweets on Twitter.

The Bristol Press – Recreational cannabis sales will be allowed in Bristol

Cannabis Tourism Is Gaining Popularity. Here’s What The Experience Is Like.