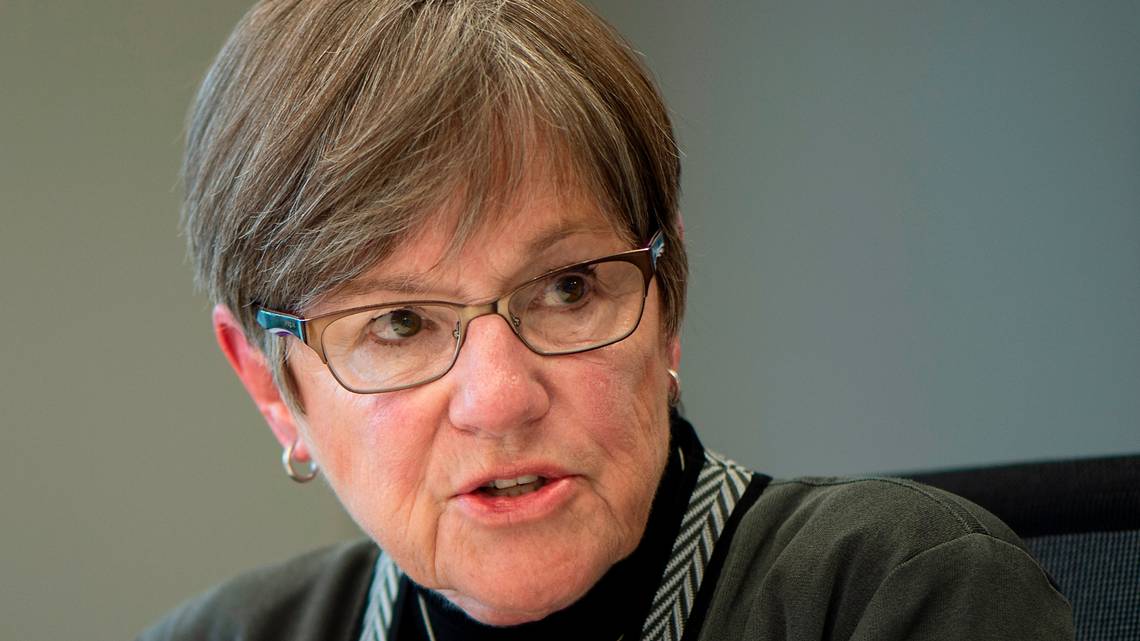 Kansas Gov. Laura Kelly in her State of State address on Tuesday night warned the Republican-controlled Legislature that she would oppose “irresponsible tax proposals” and education measures that pit “parents against teachers,” even as the Democratic governor seeks GOP support for her agenda.

Kelly has called for immediately eliminating the state sales tax on food, creating a back-to-school sales tax holiday and providing a tax break for some retirees. Kelly also wants Kansas to fully fund special education after the state has gone more than a decade without meeting mandatory funding levels.

The governor, in the first weeks of her second term, emphasized that she wants to work across the aisle, including the possibility of compromise to legalize medical marijuana in Kansas, one of just three states without any public marijuana or THC program. She also made clear that action must be taken to address diminishing water supplies in western Kansas, saying politicians had “kicked the can down the road” for decades.

But Kelly’s annual State of State address also signaled she is ready to deploy her veto pen as she begins a second term.

Warning that the classroom isn’t a “place for politics,” the governor said she would oppose efforts “designed to turn parents against teachers… to turn communities against their schools… to turn young people away from the teaching profession,” according to a prepared copy of the speech.

Republicans, both in Kansas and in states across the country, have pursued legislation to prohibit critical race theory – a college-level academic concept that examines the role of institutions in perpetuating racism – and “divisive concepts” in K-12 classrooms. A Missouri bill, for example, would ban teaching any form of form of “race or sex scapegoating.”

“I will resist politicians who want to score political points at the expense of our students and our families. Our students should not be used as political pawns. Not ever,” Kelly said.

GOP legislators have also called for bans on transgender athletes competing in girls’ sports, a proposal Kelly has twice vetoed. Republicans have also promised to propose a “parents’ bill of rights” that aims to give parents more control over curriculum but have yet to release it.

A Florida version of the “parents’ bill of rights” became known as the “don’t say gay bill” for prohibiting classroom instruction related to gender identity or sexual orientation. Previous versions of the legislation in Kansas have not been as wide reaching.

“We want high quality classical education that focuses on academic excellence, preparing our kids for a successful future, not the sexualized woke agenda we see permeating the system today,” Senate President Ty Masterson, an Andover Republican, said in a response to the speech pre-recorded two weeks ago.

“The sad reality is her party,” Masterson said, referring to Kelly, “remains beholden to the public union leadership, which fears and resists parents having any form of school choice, just wanting a blank check to their system.”

Kelly’s major education priority this year centers on significantly increasing the amount of aid the state provides to schools to educate children with special needs. As Kansas enjoys a historic, nearly $2 billion budget surplus, Kelly has proposed an additional $72 million each year for special education to bring the state into compliance in five years.

The amount of funding holds the potential to affect the kind of services and instruction upwards of 90,000 Kansas students receive. Nearly one in five students in the state receive special education services, which includes students with both developmental and physical disabilities, as well as those enrolled in gifted programs, according to the Kansas Association of School Boards.

“The Special Education funding gap doesn’t just impact students with special needs,” Kelly said. “It impacts every student, because schools end up diverting funds away from other areas to provide these services.”

Kelly said Danny’s mother, Laura, frequently volunteers at his school and has experienced the consequences of not enough funding, including times when she has had to keep him home from school because there aren’t enough staff for him to learn safely.

Some Republicans are either resistant to approving the additional special education dollars, or want to attach major strings attached.

“We are going to spend a lot of time looking at alternatives to address the issues that already exist in statute,” said Rep. Kristey Williams, an Augusta Republican. “The statute’s got flaws. So rather than just add money to a flawed statute let’s fix the statute and then address the funding and make sure it’s fair for everyone.”

The governor was originally scheduled to speak to a joint session of the Legislature two days after her second inauguration, but it was postponed after she tested positive for COVID-19.

Kelly’s office then said she did not in fact have the virus but had a false positive. Additional tests came back negative, the governor’s office said. Tuesday was Kelly’s 73rd birthday, and after lawmakers sang “Happy Birthday,” she joked that the delay “was so I would hear you sing happy birthday to me.”

The speech, delivered to a packed House chamber full of lawmakers, state officials and special guests, was anticlimactic in some respects. Typically, the State of the State allows the governor the chance to offer a preview of her agenda ahead of the release of a budget proposal that details exactly how the governor wants those goals funded.

But with Kelly’s budget already released two weeks ago, Republicans have been skeptical of some of her goals. Few issues will test Kelly’s ability to negotiate with Republicans as much as medical marijuana.

Legalization has stalled since the House passed a bill to legalize the drug in 2021. Masterson has repeatedly said it isn’t a priority in the Senate and that he wants to see more research before he is comfortable moving forward.

Kansas is surrounded on three sides by states that have legalized the drug, including Missouri whose voters just approved a constitutional amendment legalizing recreational use.

Kelly referenced a case in Hays, when police raided the hospital room of a terminally ill man using marijuana products to ease his pain.

“We all know that was ridiculous,” Kelly said. “This is not to blame the police – the police were just enforcing the law. That means the law itself is ridiculous.”

Republicans have indicated a willingness to negotiate with Kelly on immediately eliminating the state sales tax on food. Lawmakers approved, and Kelly signed, a gradual repeal this spring that will eventually cost the state about $400 million in revenue a year.

Some lawmakers want to explore a flat tax that would almost certainly garner a veto from Kelly. The Kansas Chamber of Commerce introduced legislation in both chambers that would institute a flat income tax at 2.25%. The bill includes a mechanism that could gradually draw state income tax down to zero if the state is drawing in more tax revenue than estimated.

“We have been there before. We know where it leads. And we can’t go back,” Kelly said.

“Not to debt. Crumbling roads. An overwhelmed foster care system. And perhaps most devastating of all, underfunded schools,” she said. “We cannot go back to the days where financial irresponsibility here in Topeka robbed our Kansas students of opportunity.”

Kelly will once again have to work with a supermajority Republican legislature to accomplish her agenda. Republicans in the House and Senate this year have shown a greater level of cooperation between the chambers than in previous years.

Republicans appear likely to again oppose Kelly’s call for Medicaid expansion. The Democratic governor has pushed expansion, which would provide health coverage to an estimated additional 100,000 residents or more, every year in office.

“Now I know, I sound like a broken record, but it’s only because we have a broken healthcare system,” Kelly said.

Kelly also called for action on another long-standing issue: the state’s water supply.

Some estimates indicate parts of western Kansas could run out of water in 10 years as the Ogallala aquifer depletes. While there is a bipartisan acknowledgment of the issue little has been done in the Legislature to address it.

“Waiting for some miracle to happen is not an option. We have to do something,” Kelly said. “All that we’ve achieved in the past four years is put at risk by inaction.”

Katie Bernard covers the Kansas Legislature and state government for the Kansas City Star. She joined the Star as a breaking news reporter in May of 2019 before moving to the politics team in December 2020. Katie studied journalism and political science at the University of Kansas.

Jonathan Shorman is The Kansas City Star’s lead political reporter, covering Kansas and Missouri politics and government. He previously covered the Kansas Statehouse for The Star and Wichita Eagle. He holds a journalism degree from The University of Kansas.

New York State Convicted Him. Now It’s Made Him a Weed Pioneer.

A Crystal Ball Full Of Smoke: 2023 Cannabis And Psychedelic Forecast