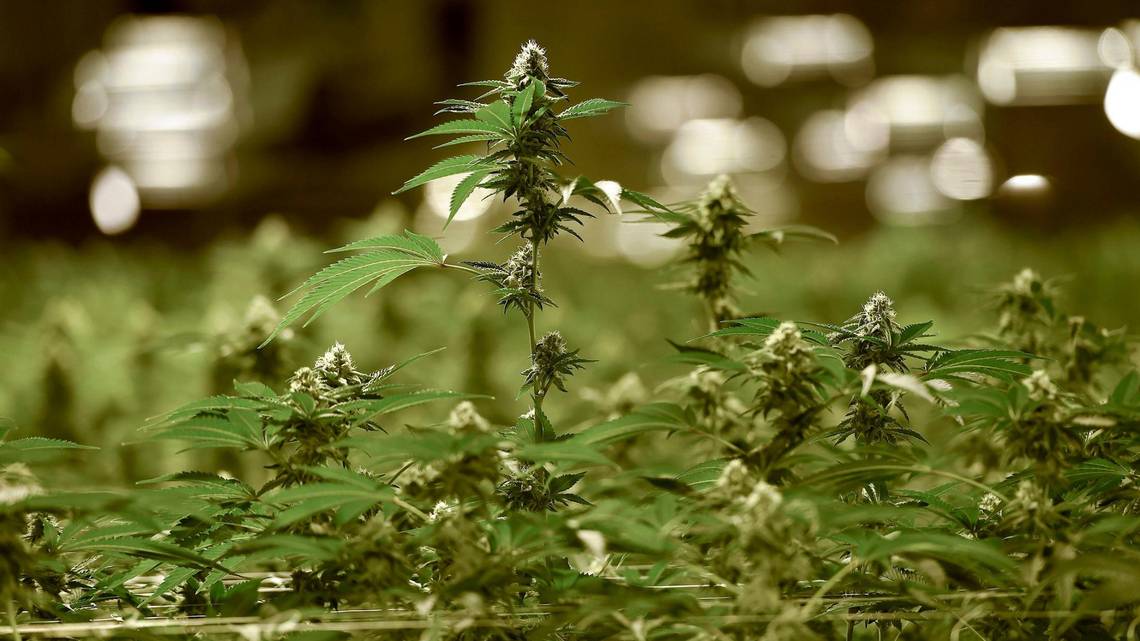 No one mistakes Kansas Attorney General Derek Schmidt for a marijuana advocate.

Schmidt, the Republican nominee for governor, has spent 12 years as the state’s top law enforcement official. In 2014 when Colorado began recreational marijuana sales, he reminded Kansans “never to bring marijuana into Kansas from Colorado. Doing so is a crime.”

In March, the Kansas Bureau of Investigation — which reports to Schmidt’s office — told the Legislature that legalizing marijuana in any form would produce “frightening consequences.”

But Schmidt is now trying to defeat Democratic Gov. Laura Kelly, who has supported legalizing medical marijuana for years. When asked about his position during a debate this month, Schmidt acknowledged public opinion has shifted.

“Ultimately public opinion decides these issues and I think it’s clear to anybody watching that public opinion in this country is moving generally in the direction of more permissiveness,” Schmidt said.

“I see people everyday whose lives are destroyed or made worse because of addiction issues and I think that is not a good thing. I think we have to stand up and stand strong against this,” he added.

Whoever wins the Nov. 8 election may very well decide whether Kansas becomes one of the last states to adopt some form of medical marijuana or continues on as a holdout.

According to the National Conference of State Legislatures, Kansas is one of three states in the country that has not legalized marijuana in any form. Thirteen states have not yet legalized medical marijuana, but 10 of those allow low grade THC products.

In addition to medical marijuana, 19 states allow recreational use of marijuana, including Colorado to Kansas’ west.

Two more of Kansas’ neighboring states, Missouri and Oklahoma, could soon be added to that list. Missouri voters will vote on Amendment 3 to legalize recreational sales in November, while Oklahomans are set to vote on a similar initiative in either 2023 or 2024.

An interim committee of Kansas lawmakers will return to Topeka on Wednesday to discuss possible marijuana legislation, days after President Joe Biden announced he would begin the process of reviewing and potentially removing the drug’s status as a Schedule I narcotic under the federal Controlled Substances Act, the same category as heroin.

Marijuana’s status as a Schedule 1 narcotic has been a justification for some opposition to legalization. But even if the federal government eventually decriminalizes marijuana, it would remain illegal under Kansas law.

By the time the Legislature reconvenes in January, Kansas could be sandwiched by states that have legalized recreational marijuana, and lawmakers could be negotiating with a new governor.

While lawmakers are confident Kelly would sign a medical marijuana bill, some believe Schmidt would likely approve legislation as well, even though he hasn’t made the issue a campaign priority.

“I think anything that the Legislature could pass, given the makeup of the Legislature, Derek Schmidt would probably sign,” said state Sen. Jeff Longbine, an Emporia Republican.

Skepticism of marijuana in Kansas

The reluctance —and in some cases outright opposition — to legalize any form of marijuana is deeply rooted in Kansas’ history as a conservative-leaning state innately suspicious of anything that smacks of vice, from alcohol to gambling. It was in Kansas, after all, where the temperance activist Carrie Nation first took to smashing up saloons.

The state has been stalled because it lacks the ballot measure laws that allowed other red states, like Missouri, to move forward.

“Our legislators are more conservative than Kansans on average,” Rep. Boog Highberger, a Lawrence Democrat, said. “If this was up for a referendum, it would be a slam dunk.”

Kansas has gradually repealed restrictive liquor laws and opened the door to gambling, with sports betting becoming the latest form of legal gambling earlier this year. Marijuana hasn’t experienced the same breakthrough, however, despite years of advocacy from some legislators, including state Rep. Gail Finney, a Wichita Democrat who died in August.

State Rep. Blake Carpenter, a Derby Republican, said ballot initiatives for recreational marijuana in Oklahoma and Missouri are a cautionary tale for conservative lawmakers that medical marijuana is a gateway to recreational.

“There are some legislators who are wanting to strike the right balance but they’re also fearful of what could end up happening in these years,” said Carpenter, who carried a medical marijuana bill on the Kansas House floor last year. “If we do pass medical, at that point does recreational follow within the next decade or two?”

In 2021, the Kansas House approved medical marijuana legislation for the first time in a 79 to 42 vote. The bill was relatively limited in scope, but still stalled in the Kansas Senate.

Under the House bill, patients would need to have one or more of an approved list of diagnoses that include Alzheimer’s, cancer and Parkinson’s. They must get a prescription from a doctor they’ve had a relationship with for at least six months. There is no limit on dispensaries in the state but individual counties may opt out.

Kansas Senate President Ty Masterson, an Andover Republican, has taken an aggressively non-committal approach to marijuana legalization. As the Senate’s top Republican, he exercises considerable influence over what legislation advances through the chamber.

“While it is not a priority, Senator Masterson has said in the past the issue of medical marijuana is maturing and the federal government’s potential action would be more evidence of that,” Masterson spokesman Mike Pirner said in a statement.

“Certainly, Senator Masterson believes any legislation the Senate would consider must have safeguards to ensure it is truly treated as medicine and not as a vehicle for recreational use.”

Masterson’s position echoes Schmidt’s stance – appearing skeptical but unwilling to entirely rule out action. Schmidt’s recent remarks opening the door to some form of medical marijuana reflect a potential transition from his law enforcement role as attorney general to an agenda-setting role as governor.

As attorney general, Schmidt has highlighted the consequences of other states legalizing marijuana. In 2016, his office released a report on the effect of Colorado legalization on Kansas. The report, drawn from a survey of law enforcement agencies and officials, said anecdotal evidence suggested Colorado marijuana was “readily flowing” into Kansas.

Schmidt’s office also said at the time that its research found that Colorado legalization had brought more marijuana edibles to Kansas, “a phenomenon rarely encountered here before the Colorado experiment.”

Earlier this year, the Kansas Bureau of Investigation told lawmakers that allowing marijuana for medicinal use would increase overall access to the drug and potential for its abuse thereby increasing crime in the state. Furthermore, legalization of some forms of marijuana, the KBI said, would harm law enforcement’s ability to enforce laws against non-medical marijuana.

During a debate last week hosted by the Johnson County Bar Association, Kelly and Schmidt were both asked whether they would change Kansas’ marijuana laws.

Kelly reiterated that she’d long supported legalization of medical marijuana, hearkening back to testimony from parents of children with seizure disorder to the state Senate. She assured listeners it would be a “very well regulated industry.”

Schmidt said he was open to medical legalization but that policymakers must be careful to write regulations that ensure Kansas didn’t become Oklahoma or Colorado.

In response to questions, Schmidt’s campaign said in a statement that the candidate opposed the legalization of illegal drugs, like marijuana. However, the statement said, he was sympathetic to “narrow circumstances like late stage cancer patients and veterans with PTSD” – both conditions included in the House bill.

However, state Sen. Cindy Holscher, an Overland Park Democrat and longtime advocate, said her understanding during negotiations in the 2022 legislative session was that a bill needed to pass that year because Schmidt didn’t want to sign the legislation.

Kansas Rep. John Eplee, an Atchison Republican and a physician who supports medical marijuana, blamed Senate leadership for inaction on the House plan. Eplee said he is OK with changes to the legislation if needed to get it passed.

“I see too many folks that have too many pain issues and chronic health issues that would be greatly benefited by THC and by cannabis,” Eplee said.

Kansas Sen. Rob Olson, an Olathe Republican who will lead the interim committee on medical marijuana, said any proposal that’s advanced will be well crafted. He indicated that after the House passed its bill, it was apparent more study was needed of how local governments would fit into a legal medical marijuana system.

“If we wanted a bill that wasn’t well thought out we would have passed the bill last year,” Olson said.

The discussions will likely be influenced by forces outside Kansas including the Biden administration’s review of marijuana’s status on the controlled substances list and ballot initiatives in Kansas’ neighboring states for full legalization.

In some ways those factors could push the state toward passing legislation, advocates and lawmakers said. But could also have the opposite effect for others.

“Being on Schedule I makes it very difficult for the commercial banking, financial industry world to handle it,” Rogers said.

Daniel Shafton, executive director of the Kansas Cannabis Chamber of Commerce, said marijuana being decriminalized nationally removes a major barrier for some lawmakers.

“Certainly, there are plenty of lawmakers who feel like their hands are tied because they feel like they can’t push for something that is federally illegal,” Shafton said.

Shafton said a movement toward recreational marijuana in Missouri should push Kansas to open the market sooner rather than later so that Kansas growers don’t lose out.

It could also lead to a more serious discussion of moving beyond medical marijuana in the coming years, Carpenter, the Derby Republican, acknowledged, even though he said would oppose recreational marijuana.

“There could be Republicans who are pushing for full-blown recreational marijuana,” Carpenter said. “Especially if Kansans can just cross the border and go and participate in those states.”

Katie Bernard covers the Kansas Legislature and state government for the Kansas City Star. She joined the Star as a breaking news reporter in May of 2019 before moving to the politics team in December 2020. Katie studied journalism and political science at the University of Kansas.