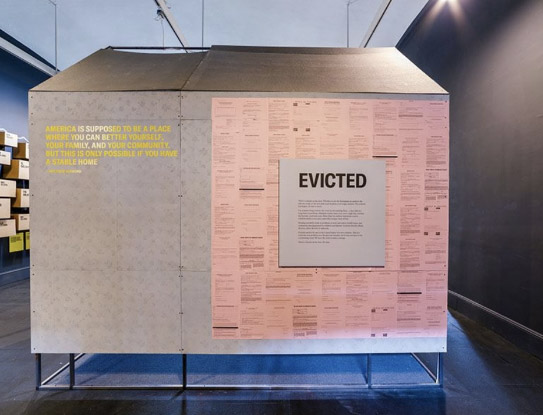 “Evicted,” an exhibit put on by the Community Action Agency of Somerville , is currently running at the Somerville Armory until Nov. 4. Based on sociologist Matthew Desmond’s novel “Evicted: Poverty and Profit in the American City”, the interactive exhibit explores the reasons for the millions of evictions in the United States every year and their consequences. Somerville is one of the final stops on the exhibit’s national tour. The exhibit is open at the Armory Monday through Wednesday from 4 p.m.–8 p.m. and on weekends from 11 a.m.–6 p.m.

Somerville is a particularly appropriate location for this exhibit according to Sinead O’Hara, CAAS’ project manager for the exhibit.

“We have a huge housing crisis [in Somerville],” O’Hara said in an interview with the Daily. “The amount of folks here who are struggling to stay in their homes, the amount of evictions that have been happening since the [eviction] moratorium was lifted [in June 2022] … it’s just a daily struggle here.”

Since the start of 2022, over 1,000 residents have come to Somerville’s Office of Housing Stability for housing assistance, representing a massive increase compared to previous years. According to Laurie Goldman, a senior lecturer in the Department of Urban and Environmental Policy and Planning, the main explanation for this spike in housing instability is the widespread increase in housing costs. In Sommerville, where about 66% of residents pay rent, about 5,000 of households are currently allotting over 50% of their monthly income on rent. The average monthly rent of a one-bedroom unit is $2,525, a rise of 26% since last year.

“We have so many people who want to have homes, and not enough supply. … A lot of that boils down to the profit-driven nature of the market. Since there is such a high demand, there is the possibility of catering to those who can most afford high prices. That’s what, in fact, we’re seeing,” Goldman explained. “Federal, state, and local government policies and community-based organizations have done a lot to make housing more affordable for many poor people and communities. Policies also help address the current and enduring effects of discrimination against people of color and others. But these efforts are not nearly enough.”

Another major, yet perhaps less obvious, reason behind evictions is the conflict between federal and state laws on cannabis, an issue that “Evicted” highlights. While cannabis use has been legal in Massachusetts since December 2016, it is still prohibited on the federal level. This means that anyone who is using public housing assistance — a federal program — and is caught with the drug faces eviction.

“Any type of [federal] institution … does not give any wiggle room because federal law, by and large, always trumps state law,” Jill Weinberg, an assistant professor of sociology at Tufts, explained.

Weinberg finds there is a disconnect between public opinion and federal law.

“As a sociologist, what we find is that the law is always two or three steps behind what society thinks,” she continued. “If you look at Gallup poll, if you look at any public opinion poll, for decades upon decades, the legalization of marijuana has been very much viewed favorably by the general public. … For me, it’s hard to think why the law is so out of step and not taking additional steps to fall back in step with what the states and the general public would want.”

President Joe Biden pardoned on Thursday all people convicted under federal law of marijuana possession and called on states to follow his lead. He also directed the attorney general and the secretary of health and human services to review the federal classification of marijuana.

“Sending people to prison for possessing marijuana has upended too many lives and incarcerated people for conduct that many states no longer prohibit. Criminal records for marijuana possession have also imposed needless barriers to employment, housing, and educational opportunities,” the president wrote in an Oct. 6 statement. “And while white and Black and brown people use marijuana at similar rates, Black and brown people have been arrested, prosecuted, and convicted at disproportionate rates.”

Three Somerville cannabis businesses have joined forces to support “Evicted” and raise awareness of the challenges that people with cannabis convictions face in the housing market. Ayr Wellness, Liberty Cannabis and Rev Clinics are all currently selling limited edition edibles called “Evicted Citral Orange Bites” and donating 100% of profits to CAAS and the exhibit.

“We’re thrilled to partner with the other Somerville medical cannabis retailers for this cause,” Tom Schneider, chief marketing officer at Rev Clinics, said in a press release. “It’s not every day you see business competitors unite in this way and we feel lucky to be able to work with these talented folks to produce a product that will help raise awareness around this incredibly important issue.”

Along with these cannabis businesses, “Evicted” is also being supported by local groups including the Somerville Homeless Coalition, Somerville Public Schools and YouthBuild Just A Start.

For O’Hara, seeing the Somerville community join together to fight against their housing crisis is a reason to have hope.

“Eviction can be so isolating. … It can feel like something that you’re just dealing with completely on your own,” she said. “For folks coming to see the exhibit, I’m hoping they take away from it that we have just so much collective power amongst us and we can work together to … fight for better conditions. I’m hoping that people can come through and realize that they’re not alone in this struggle.”