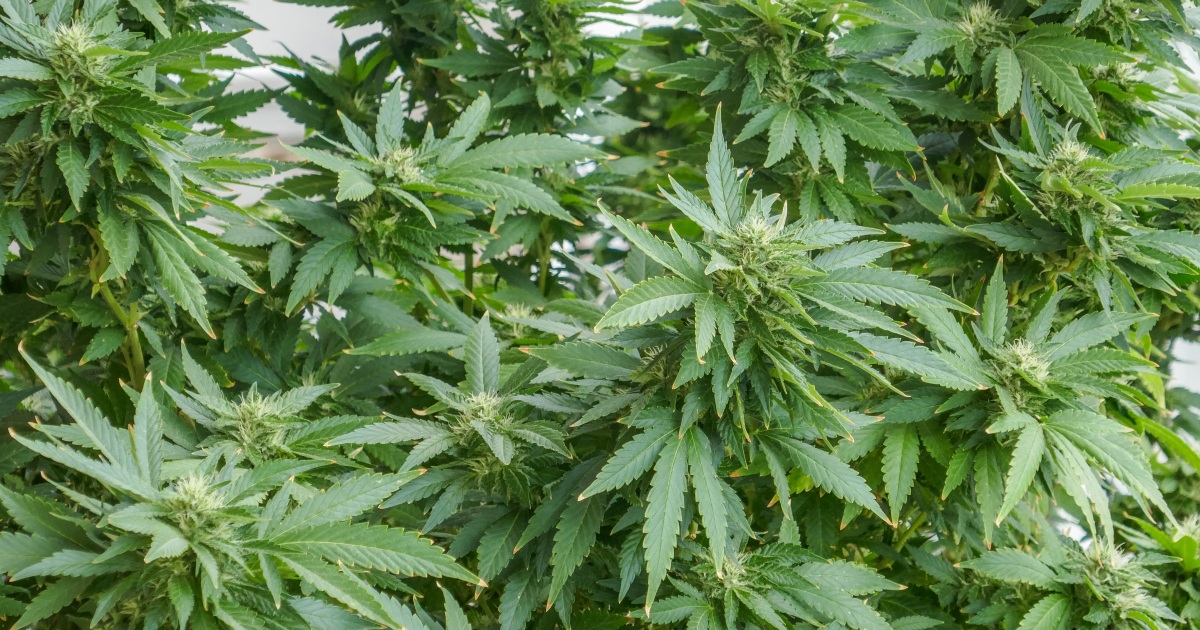 Cannabis reform has grown in popularity with voters, activists, and state legislators; cannabis is now legal for medical use in 38 states and DC and for adult-use in 19 states and DC. Despite those advances in state level reforms and in the broader conversation nationwide, Congress has failed to pass a major piece of legislation addressing the issue, and many voters and activists wonder why.

One argument is that federal level officials—in the executive branch and in Congress—simply don’t care enough about the issue to address it. To consider this question, I included a coding about cannabis reform in Brookings Primaries Project in 2022. The Brookings Primaries Project examines the publicly stated views—via the websites and social media presence—of all candidates running in U.S. congressional primary races. We coded each candidate on a four-point scale: whether they supported legalization or decriminalization of cannabis, whether they supported medical legalization only, whether their position was complex or indecipherable, and whether they failed to mention the issue at all.

These findings generally reflect a reality that bears out in public opinion polling. While cannabis reform is popular among Americans (68% support in the latest Gallup poll), it is not a salient issue among voters; polling shows that cannabis reform has never jumped into even the top 20 most important issues for voters. That support but lack of salience has a compelling impact on members of Congress and congressional candidates: it gives them the freedom not to engage the issue.

Those publicly stated positions were not uniform across parties however. As Table 2 shows, a pro-cannabis reform position was much more popular among Democratic candidates (30.5%) than among Republican candidates (2.0%). This demonstrates clear differences between the parties that are also reflected in rates of opposition to cannabis. Although more than 90% of Republican candidates failed to mention cannabis at all, 4.1% of them staked out an anti-cannabis reform position. On the other hand, only three of the 962 Democratic primary candidates (0.3%) opposed reform.

It is true in public polling that differences exist between Democratic voters’ support (83%) for cannabis reform and Republican voters’ support (50%). However, the polling data above show that there is still a clear disconnect between what voters want and what candidates for office are willing to say about the issue. For example, only 2% of Republican primary candidates supported cannabis reform, despite 50% of GOP voters endorsing that policy. And even while a third of Democratic primary candidates support legalization, that pales in comparison to the more than 80% support Gallup finds among Democrats.

Another way to look at these data are to divide states up according to whether they are running for Congress in the 19 states that are fully legal, the 19 states that have medical only, or the 12 states that have neither. As table 3 shows, the legal status of cannabis in a state has effectively no impact on whether a candidate engages on the issue: between 80.2% and 82.9% of candidates in each type of state are silent on it. Candidates in fully legal states (15.9%) are more likely to support cannabis legalization than in medical only (12.2%) or non-legal states (11.7%). 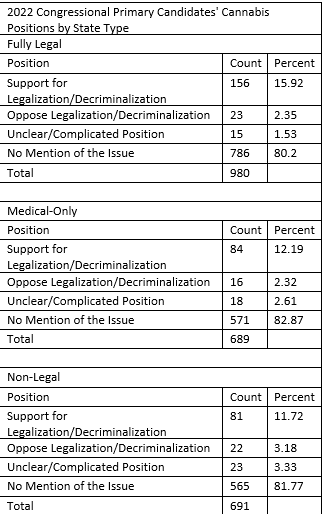 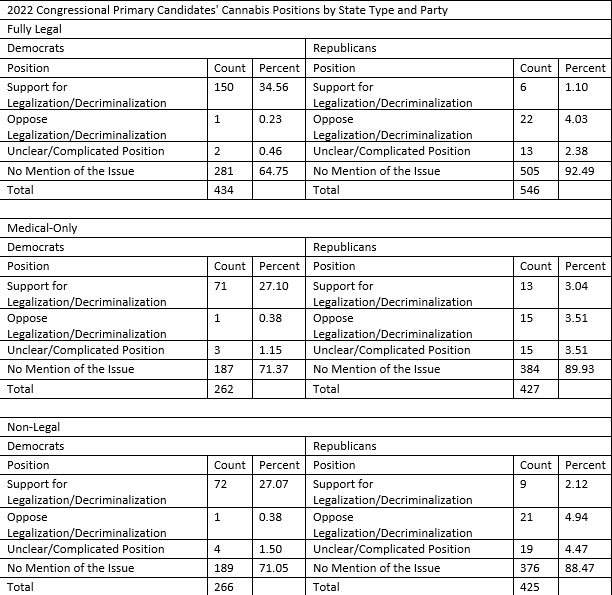 The data also allow for an analysis of a) whether cannabis could be viewed as more than a fringe issue and b) whether taking a position on cannabis potentially harms candidates’ chances of winning. The latter point is of particular interest given the vestiges of drug-war era indoctrination among elected officials that a pro-drug reform position is politically toxic.

The data also show that cannabis position taking differences by winners and losers is driven largely by party. As Table 6 shows, of the 54 winning primary candidates who publicly opposed cannabis, 94.4% were Republicans. Conversely, of the 199 winning candidates who supported cannabis reform, 95.0% were Democrats. In fact, among all Democratic primary candidates, 64.5% of those taking a pro-cannabis position won their primary, and only 55.1% of winning Democratic candidates opted not to take a position on the issue. For Republicans, 78.1% of all winning candidates opted not to discuss cannabis in any context. 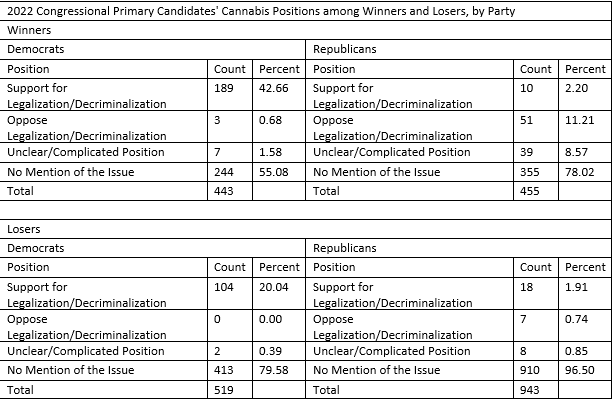 In sum, cannabis as a political issue has risen in importance over the past 25 years. As state legislatures and voters via referenda have enacted changes to cannabis laws, the issue has become more popular even in the halls of Congress. However, cannabis reform advocates’ frequent stupefaction at the lack of progress at the federal level bumps up against a stark reality. Most candidates for federal office do not see cannabis as an issue prominent enough to discuss, and deep partisan differences still remain among elected officials, even as support for cannabis in the general public has exploded in recent years. And the true motivator for a member of Congress to take or change a position—whether voters hold their feet to the fire over an issue—has not yet become a reality in the vast majority of Congressional races across the United States.

Investors are high on the cannabis industry, but federal rules kill the buzz