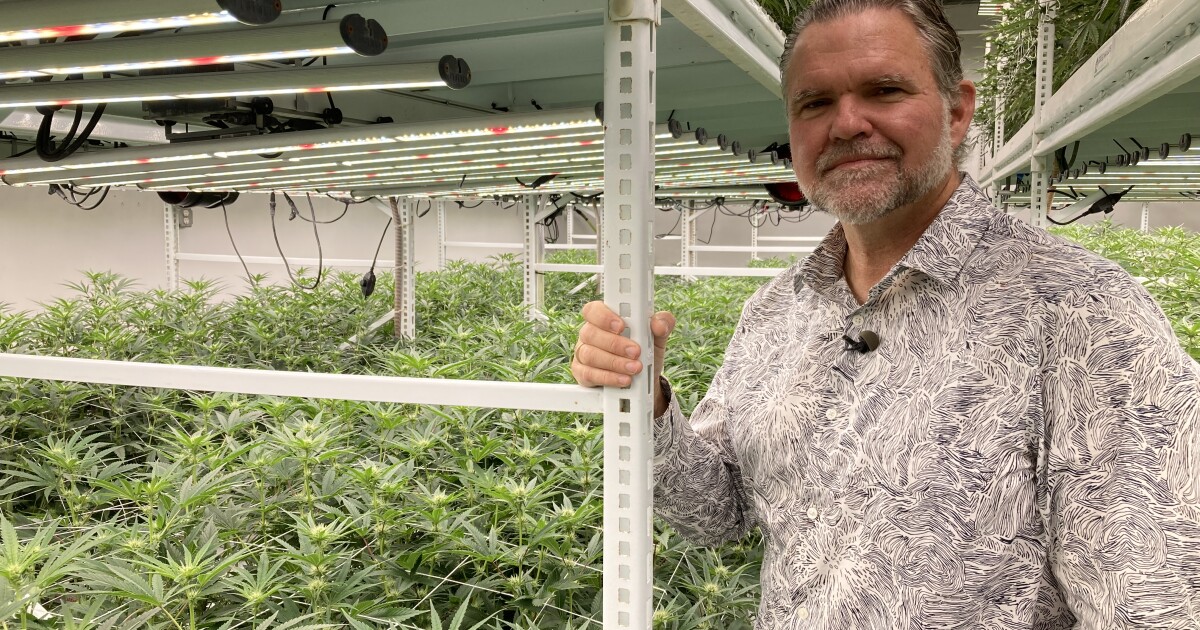 Lincoln Fish is the founder and CEO of OutCo, a marijuana shop in unincorporated El Cajon.

During a recent morning show-and-tell of the great diversity of products that he legally sells in his dispensary, he said most people still come to buy buds so they can roll their own joints. But there’s a lot of other stuff to choose from, like the joints that are ready to go.

“These are pre-rolls that we make on site, and they’re stronger because this is what’s called an ‘infused pre-roll,’” Fish said. “We put the bud on the inside, but then we take the oil that is extracted from the plant and the kief, which is kind of the powdery substance that comes off, and we roll it in the kief.”

Then there are topicals, vapes and what are called tinctures, a liquid infused with cannabis. Some are strictly recreational but some, like the topicals, are more likely medicinal.

The effects of the many products at OutCo may be known to the people who use them. But it’s unknown how they are likely to affect most people, or why they work the way they do.

Democratic San Diego Rep. Scott Peters has co-sponsored a bill that would try to close that knowledge gap by setting a national research agenda for studying marijuana. It would also allow researchers to study what is on the shelves of OutCo.

“Places like California have legalized cannabis for recreational and medicinal uses,” Peters said. “But today a researcher from UCSD can’t go into a cannabis store where you and I can buy a gummy to help us sleep, take that very product and come back and analyze it ,because that’s not allowed under federal law.”

Peters’ bill is called the Developing and Nationalizing Key Cannabis Research Act: the DANK act, for short. It says it would “shield researchers from legal sanctions for acquiring and testing state-legal cannabis products.”

“So the idea behind this act is to develop a national research agenda so we can measure safety, efficacy, long-term effects and the mechanisms of use. Maybe develop sobriety tests. All of those things need to happen with cannabis around the country, and this bill will get that going,” Peters said.

Psychiatry professor Igor Grant is the director of UCSD’s Center for Medicinal Cannabis Research. UCSD has been studying marijuana for two decades. But Grant said the explosion of the marijuana industry had created many new questions.

“For example, in California people are getting products with many different strengths of THC, many combinations of THC, CBD and other products,” Grant said. “They’re also taking them not necessarily by smoking a joint, but by vaporizing in some other way. Or, maybe taking it by mouth. Maybe rubbing it on to their skin, and so on and so forth. We know very little about how these products are absorbed into the body, metabolize and work.”

Today, any marijuana used for research has to come from one federally approved farm in Mississippi. Some people in the business say the quality of that marijuana is poor. And Grant acknowledges that what researchers get from that Mississippi farm is not geared to what’s really going on in the market.

What we know so far

The THC referred to by Grant is the chemical in pot that makes you high. It also has some proven medicinal effects. One effect of cannabis that’s well-documented is pain relief.

At a news conference late last month, Mark Wallace, professor of anesthesiology at UCSD, said the correct use of cannabis by people with chronic pain had shown impressive results.

“We were seeing reductions in pain, reduction of opioids and even elimination of opioids in patients. And the result of pain relief includes improved sleep, improved function,” Wallace said. “So this stresses the importance of the DANK cannabis research act to enhance our understanding of medical cannabis and help our patients lead a better quality of life.”

Also at that press conference was Colin Wells, an Afghanistan war veteran who said cannabis got him off of opioids.

“I had a crippling opioid addiction for most of my life, compounded by my traumas in Afghanistan. Cannabis finally, after decades, empowered me with the ability to search within myself the strength to overcome my addiction,” Wells said.

Grant said there are medical benefits of cannabis that go beyond pain relief.

“THC-containing products are also helpful for managing severe muscle spasms. Conditions like multiple sclerosis. And THC itself has long been recognized as a VA-approved treatment for certain wasting diseases where people lose their appetite and lose a lot of weight” he said. ”So using the ‘munchies’ effect of THC can improve the appetite.”

So far, there is no known opposition to Peters’ DANK act, which he calls bipartisan as it has a Republican co-sponsor: Rep. Dave Joyce from Ohio.

Back at the OutCo cannabis shop, Lincoln Fish has plenty of advice for which cannabis works for what ailments. But he admits that he doesn’t know why it helps.

“It would be great to understand better — like, you have this issue: What should I be giving you? What should your dosage be? What is the best form to be taking this?” Fish said. “We know a lot of it anecdotally. But, if we could have some significant, large-scale, double-wide kinda study, we could learn a lot more.”