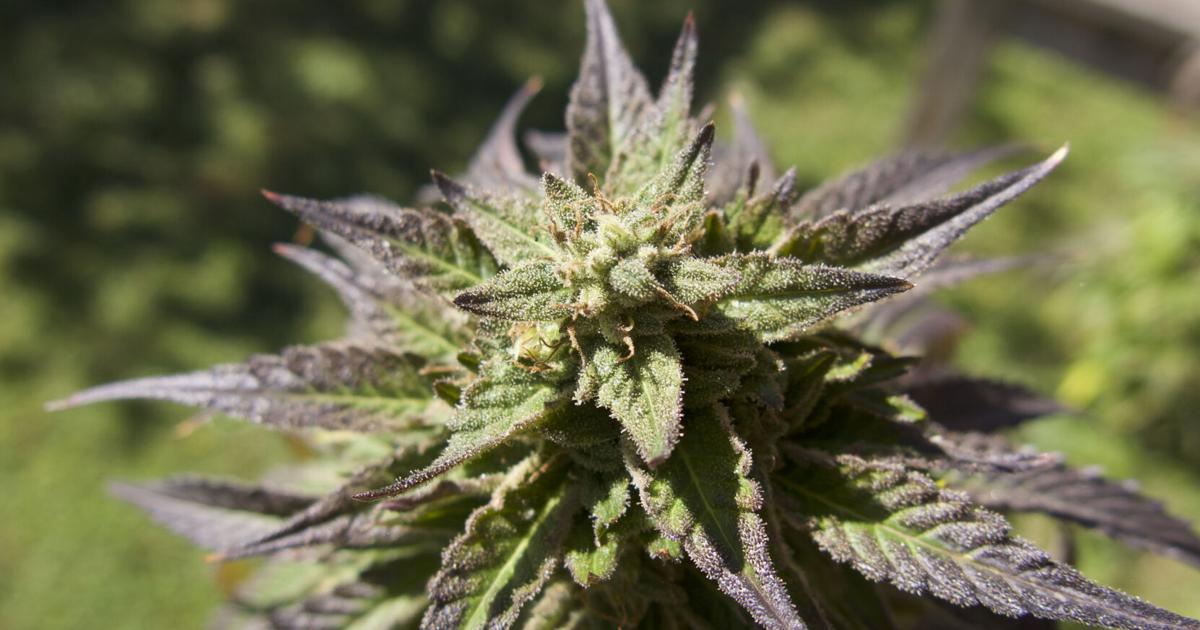 This column was supposed to be about the fall marijuana harvest and things yours truly has learned in his first cannabis grow season. But before we dive deep into those details, I have a terribly sad announcement.

David Bowers – the cannabis plant, not the former mayor – has died. Moreover, his sudden demise was not unintentional. His owner in Southwest Roanoke chopped him up and threw him in the trash Oct. 2, rather than harvest it.

At the time she committed this premeditated herb-icied, the tall and rangy plants suffered from a variety of plagues. One was malignant bud rot, in which green unfertilized flowers shrink into a brown-and-crumbly mess.

But that was hardly the plant’s only malady. Gnats and mold infested Bowers, too. A fat brown caterpillar discovered on one rotting bud was the final straw.

Understandably, the owner was reluctant to bring Bowers indoors for drying. Why take a chance on needing whole-house fumigation down the road?

The sad reality is that we’ll have no David Bowers-branded weed from the 2022 growing season. That’s a pity.

However, we’ll still have plenty of politician-pot to puff on for the tasting party later this fall. Because the plants named after Del. Chris Head, R-Botetourt, Del. Marie March, R-Floyd, and Roanoke Mayor and Democrat Sherman Lea are now hanging and drying in a secret and secure curing facility.

By around Thanksgiving, they should be ready for smoking. Which suggests the upcoming holiday season will be a lot of fun.

First, buy feminized seeds.Yes, they cost $5 to $10 per seed on average. But if you use unknown-gender seeds, you’ll probably waste time on half your plants, which you’re going to have to kill as soon as they begin displaying pollen sacs – a male characteristic – rather than flower buds.

You’ll also waste money on fertilizer and other accessories. With feminized seeds, there’s no waste.

Yes, you could get lucky and wind up with all female plants from ungendered seeds. But it’s equally as likely you’ll be unlucky, like a friend of mine from Bedford. All of his plants turned out to be males and he wrapped up his grow season by slaughtering them.

This year, I started with six unknown-gender seeds and two feminized seeds. By the time I was able to identify (and kill) three plants that turned out to be males, I’d invested in soil, grow bags and fertilizer for them – and that stuff cost far more than the $20 to $60 I’d have otherwise spent on feminized seeds.

Acidified water?Experienced growers and cannabis-raising manuals advise you to feed your plants water that’s slightly acidic. The best Ph, they say, is 6.0 to 6.5 – neutral is a Ph of 7. The treated water from Crystal Spring, which is what I get at home, has a Ph of about 7.5.

I invested in a chemical Ph testing kit ($8) AND an electronic Ph testing meter ($80), and some high-potency acid to mix in my water to bring the number down. It took 1 milliliter of acid per gallon of water to get the acidity in the so-called “correct” range.

My neighbor, who got seeds, fabric pots, fertilizer and soil from me, didn’t bother. She watered her plants straight out of her garden hose.

The chief difference was, to varying degrees, leaves on all three of my plants began turning yellow and/or brown in August. With the Mayor Sherman Lea plants, it was severe. And that plant yielded the smallest buds.

My neighbor’s plants, however, remained a beautiful lush green through the end of September, which left me with cannabis-envy. Based on that experience, I probably won’t bother to acidify the water next year.

(If you’re a Ph nut, go with the chemical testing kit. Besides its expense, the electronic Ph meter is a pain in the patootie to use.)

Plant in the ground if possiblePotted plants require lots of water in hot and dry weather, and those planted in 15-gallon fabric grow bags (as I used) require more because the bags are far more breathable than a ceramic or plastic pot.

As a result, a cannabis plant in a fabric pot is less likely to become root-bound or suffer “root rot.” And, they’re almost impossible to over-water in fabric bags. But the soil dries out a lot faster.

All that meant I schlepped a lot of acidified water from my kitchen to my south- facing deck last summer. When the plants got big and the rain grew sparse, they each required up to two gallons per day.

Contrast that to the Rep. Bob Good, R-5th, plant, which a friend transplanted into his Floyd County garden. Aside from weekly feedings with fertilizer, he didn’t water Bob Good at all.

And the plant grew to be the most lush plant of all those I started.

Next summer, I’ll plant at least one of my cannabis plants in the garden to see if I get the same result.

Growing stage is easy; budding stage is notIt’s hard to mess up cannabis while the plants are growing. Decent soil, water, sun and timely fertilizer is all you need in the initial stage. They truly flourish and grow like weeds.

The flowering/budding stage is a different question, though. That’s when tragedies, like what happened with the David Bowers plant, are most likely to occur.

A principal late-season concern is bud rot. The whole bud, or a large portion of it, turns brown and dries up. When touched, it easily crumbles. At the least, the rot needs to be excised when discovered.

Down in Christiansburg, the owner of the Dan Casey plant found some bud rot and harvested her entire plant immediately.

I found some rot on my plants, too, but trimmed it off as it arose, and that stanched the spread.

The next stepThe plants are now hanging and drying upside down. They’re supposed to remain in that state for 10 to 14 days. Then the buds need to be trimmed off the branches, a painstaking process.

It can also make a mess, because marijuana-flower sap is super-sticky stuff. For example, Dawn dishwashing soap won’t wash it off your fingers. For that you need isopropyl alcohol.

For that reason, I’ve been advised to wear polyurethane gloves during the trimming process.

The old-school way to finish the buds’ curing is to store them in sealed quart mason jars, and remove the lids for an hour daily to “burp” the containers. This helps prevent mold.

Instead of going that route, I invested in Grove Bags, a high-tech solution. The ones I bought are roughly 2 1/2 gallons each and cost $9 a piece. They’re supposed to hold up to 1 pound of buds.

The bags are self-burping, which means they allow vapor to pass out of them but not in. The manufacturer says this prevents mold. Grove bags have zip locks, but the manufacturer recommends heat sealing them for the best results.

Stay tuned for next month – I’ll tell you how the no-burping bags worked.

In the meantime, if you want to learn more about growing cannabis, there’s a “Catalina Canna Mixer” Saturday beginning at noon at Golden Cactus Brewing downtown on Salem Avenue.

The event is sponsored by White Lightning Seeds of Roanoke and Commonwealth Canna, which produces Virginia soil for cannabis plants.

Seeds will be available for sale and as giveaways.

Get local news delivered to your inbox!