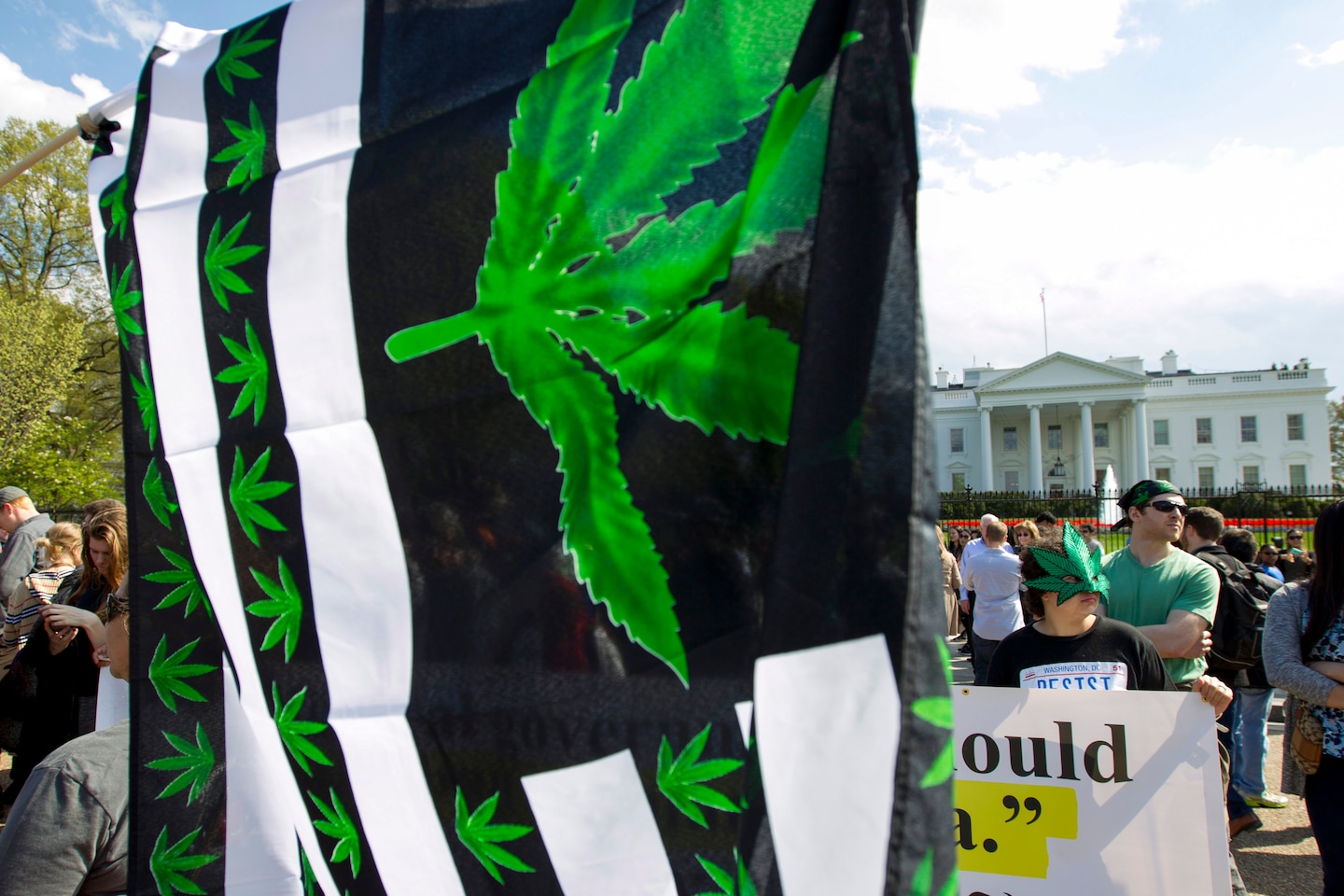 Happy Monday, everyone. It’s four weeks until the midterms. Tell us what we need to know: rachel.roubein@washpost.com.

Today’s edition: The Supreme Court decision overturning Roe v. Wade is revealing the growing influence of Catholic hospitals, which have restrictions on services like abortion and birth control. An Arizona court halted enforcement of the state’s near-total abortion ban. But first …

President Biden tasked the federal health department with undertaking a major scientific and medical review that has the potential to upend more than a half-century of marijuana policy.

Last week, Biden directed the Department of Health and Human Services and the attorney general to expedite a review into whether marijuana should remain listed as a Schedule I substance, a category usually reserved for the most dangerous drugs such as heroin and ecstasy.

But such an evaluation — the first initiated by a U.S. president — is made all the more difficult due to tight restrictions on research into marijuana, which some experts and government officials say have hindered the ability of scientists to study the drug. Yet, those tight restrictions are in place precisely because marijuana is classified as a Schedule I drug, presenting a Catch-22 for scientists.

“It’s something that we constantly communicate: We really need to figure out a way of doing research with these substances,” Nora Volkow, the director of the National Institute on Drug Abuse, told The Health 202. Her agency is a major funder of studies on drug use and addiction, and Volkow said she’s working to find pathways to ease research into Schedule I drugs.

Either way, a final determination over how to classify marijuana could take years. The prospect is sure to ignite a flurry of lobbying and a renewed push in Congress to decriminalize the drug at the federal level.

The Food and Drug Administration is charged with conducting an assessment considering eight factors, such as marijuana’s actual or relative potential for abuse, scientific evidence of pharmacologic effect and the state of scientific knowledge about the drug. The agency then makes a recommendation.

Then, the Drug Enforcement Administration typically conducts its own independent review. If there’s enough evidence that a change is warranted, then the rulemaking process may begin.

Some advocates — such as Kevin Sabet, the president and CEO of Smart Approaches to Marijuana — have argued that marijuana should remain a Schedule I drug, but that studying the drug should be easier by creating a new category for research. Others have also proposed similar approaches to research.

Looking forward to working with Attorney General Garland to answer @POTUS’ call to action to review how marijuana is scheduled under federal law. https://t.co/aXMcWCjJh2

A senior administration official, speaking on the condition of anonymity due to ground rules set by the White House, emphasized to reporters that Biden isn’t pushing for descheduling or any particular schedule, but rather for a review to assess how marijuana should be classified.

But on the campaign trail, Biden said he supported moving marijuana to a lower schedule, such as classifying it as a Schedule II drug, CNN reported at the time. Here’s Biden talking marijuana at a Las Vegas town hall in November 2019:

“It is not irrational to do more scientific investigation to determine, which we have not done significantly enough, whether or not there are any things that relate to whether it’s a gateway drug or not.”

Some experts don’t anticipate that the administration would deschedule marijuana. But some top congressional Democrats are pushing for that to happen, which would decriminalize marijuana at the federal level and treat it the same as alcohol and tobacco.

Under legislation from Sens. Chuck Schumer (N.Y.), Cory Booker (N.J.) and Ron Wyden (Ore.), cannabis would be removed from the federal list of controlled substances and states could craft their own laws without fear that Washington may intervene. Wyden said he welcomes a review by HHS on the scheduling of marijuana, but emphasized that he believes marijuana should be descheduled.

Catholic health systems, which don’t provide contraception or abortion in most cases, have a growing influence in the United States, The Post’s Frances Stead Sellers and Meena Venkataramanan report.

Catholic systems now control about 1 in 7 U.S. hospital beds, and are “the sole community providers of short-term acute hospital care” in more than 52 communities across the country, according to the liberal health advocacy organization Community Catalyst.

Key context: Catholic health-care facilities must follow directives from the United States Conference of Catholic Bishops when treating patients. The religious doctrine prohibits providers from offering services it deems immoral, which includes sterilization, such as vasectomies and contraception, as well as abortion.

More than one-third of women who went to Catholic hospitals for reproductive care said they weren’t aware of the facilities’ religious affiliation, according to a 2018 survey published in the journal Contraception.

The big picture: The role of Catholic doctrine in U.S. health care has expanded during a years-long push to acquire smaller institutions — a reflection of consolidation in the hospital industry, as financially challenged community hospitals and independent physicians join bigger systems to gain access to electronic health records and other economies of scale.

Here’s the share of Catholic hospitals in states across the country:

Republican Sens. Rick Scott (Fla.), chair of the National Republican Senatorial Committee, and Tom Cotton (Ark.) will travel to Georgia tomorrow to stump for Herschel Walker, following accusations that the Senate candidate paid for one abortion and urged a second, our colleagues Michael Scherer and Annie Linskey reported.

The GOP candidate is in a competitive contest with Sen. Raphael Warnock (D), the outcome of which could help determine which party controls the Senate for the next two years. Republicans have shown no signs of backing away from the race, with GOP lawmakers hitting the airwaves yesterday to drum up support for the embattled candidate.

Walker — who is running for office on a platform that opposes abortion in all cases, without exceptions for rape or incest — has denied reports that he paid for the mother of one of his children to have an abortion and later urged her to have a second one. The woman, speaking on the condition of anonymity to protect her privacy and that of her child, told The Post in a brief interview Saturday that those reports accurately described her experiences.

Hear what other lawmakers and pundits have to say about the Walker allegations:

The ruling means that abortions are now prohibited in Arizona after 15 weeks of pregnancy. Gov. Doug Ducey (R-Ariz.) signed the restriction back in March, which went into effect the day after a judge revived the near-total ban in late September.

The details: The Arizona Court of Appeals agreed with Planned Parenthood that a judge should not have lifted a decades-long injunction on the near-total restrictions, which are rooted in an 1864 law that has no exceptions for victims of rape or incest and threatens abortion providers with imprisonment for up to five years. The pause on the law is in place until the appellate court can hear the case.

In the panel’s brief, Judge Peter J. Eckerstrom wrote that Planned Parenthood’s attorneys had “demonstrated a substantial likelihood of success” in its legal challenge against the stricter prohibitions. The reproductive rights organization had argued the lower court erred in resurrecting the Civil War-era ban because it failed to consider a host of laws passed more recently in the state that provide abortion seekers more leeway.

A county judge issued a preliminary injunction against a state law prohibiting most abortions after fetal cardiac activity is detected while a state constitutional challenge against the ban is heard, citing individual liberty. The decision extends an earlier, temporary suspension of the law that was set to expire this week. The procedure is permitted up to the 22nd week of pregnancy.

A measure to enshrine abortion access into the state constitution is heading toward an easy victory. But political analysts are left wondering how the amendment will impact the state’s competitive congressional races, unsure what type of people the measure might bring to the ballot box on Election Day, The Post’s Scott Wilson writes.

Women powered Democrats in the 2018 midterms. Will they again in 2022? (By Dan Balz | The Washington Post)

‘The Cash Monster Was Insatiable’: How Insurers Exploited Medicare for Billions (By Reed Abelson and Margot Sanger-Katz | The New York Times)

Pregnancy complications spiked during the pandemic. No one knows exactly why. (By Ariana Eunjung Cha l The Washington Post)

Thanks for reading! See y’all tomorrow.