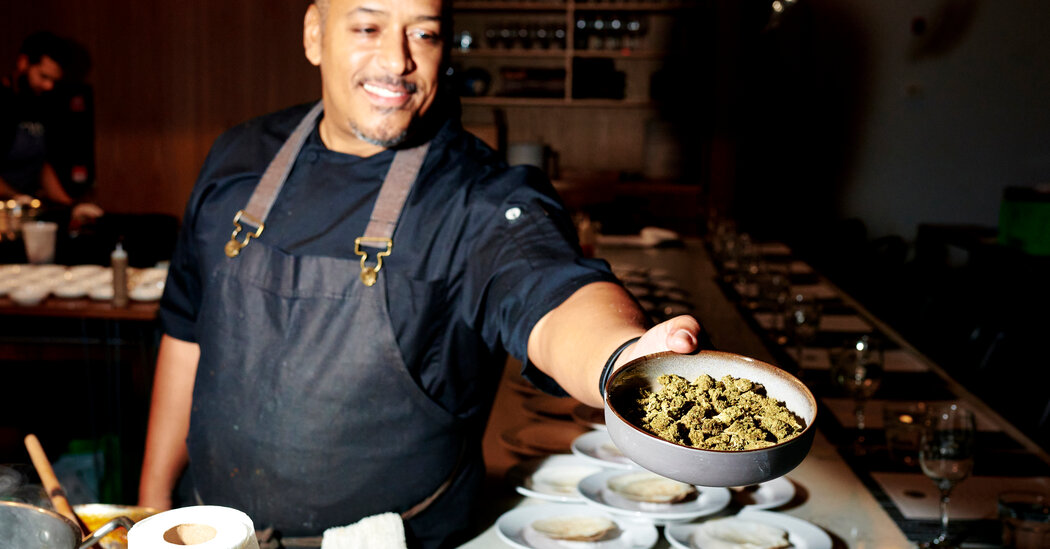 Despite the bright lighting and modern setting, the mood at the dinner was relaxed with maybe a tinge of adventure, as many of the diners were seated next to perfect strangers. As they made their way through the courses, ingesting increasing amounts of cannabis, they grew livelier and more animated. The conversation crescendoed, but the atmosphere never crossed into raucous.

“Right around the middle of the courses, the water starts to disappear,” a server told me as he refilled my glass. “People are like, ‘Oh, yeah, I’m smoking weed.’”

Mr. Trinidad, 49, is a native New Yorker who was raised on the Lower East Side and says he was born in a taxi. At 14, he tried marijuana for the first time. It was the late 1980s, when it was illegal in all 50 states. At 17, he started working in kitchens, eventually becoming a chef and opening acclaimed restaurants like Maharlika and Jeepney. The aim of 99th Floor, he said, was to “take the stigma away from a super-stoned experience,” to “elevate” it.

“It’s very much like drinking a bottle of wine,” Mr. Trinidad said over coffee several days before the dinner. “You’d sip on a bottle of wine over the course of a few hours, you’d get warm, feel better, feel good. Same thing with cannabis. In small doses, you can get all the euphoria, all the benefit from it, without the onset of panic.”

By the end of the meal, each diner would have ingested roughly 20 to 25 milligrams, an amount that Mr. Trinidad equates to a bottle of wine.

Years ago, when Mr. Trinidad was first exploring the scene, he attended other cannabis dinners and found the dosages way too strong. At one, 30 very high strangers were stranded on a rooftop, none of them interacting.