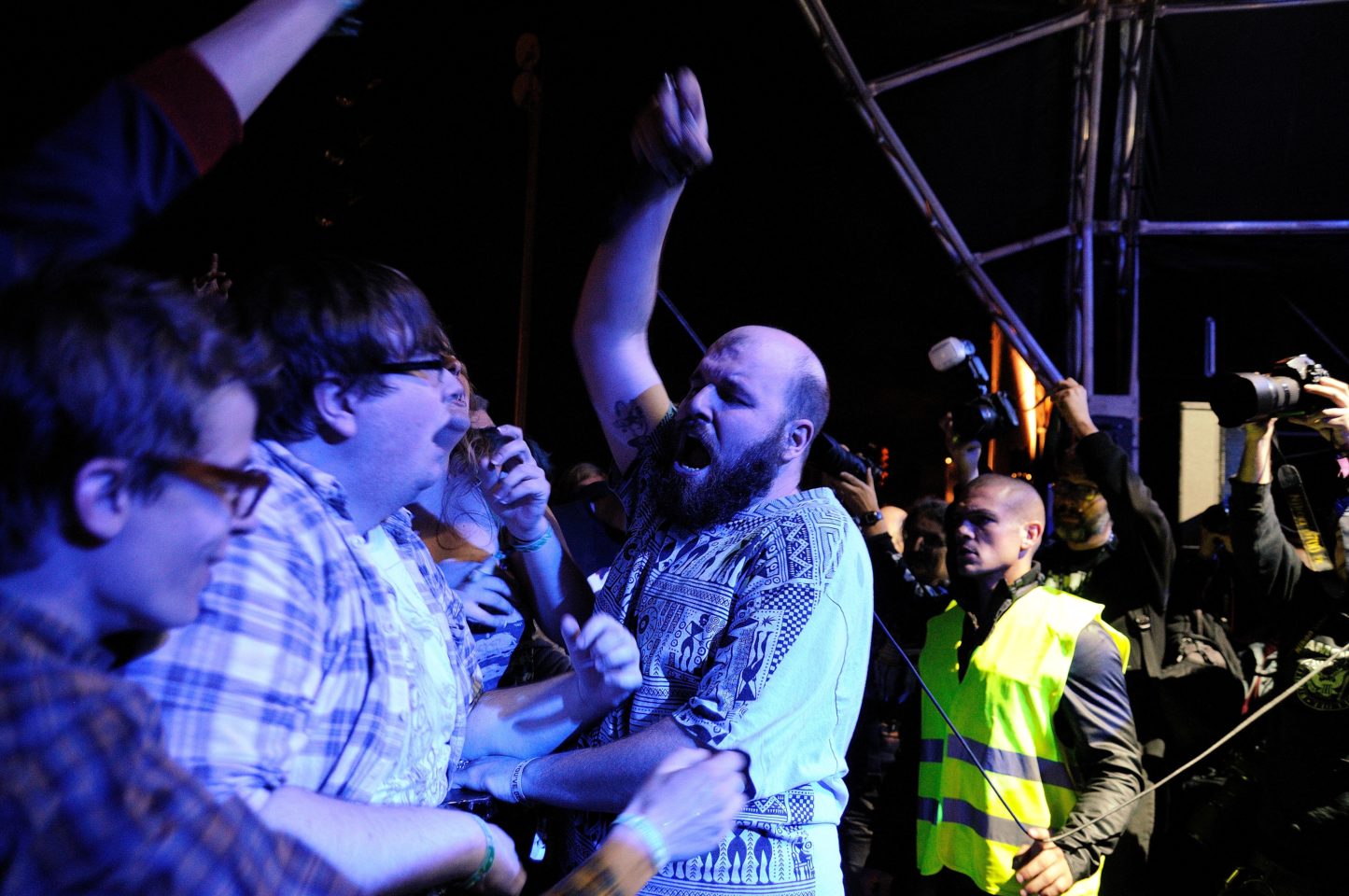 Over the past decade and change, Damian Abraham, lead singer of Canadian band Fucked Up, has become a public conduit for punk music, pro wrestling, and pot. With scores of reports covering cannabis, wrestling, and society-at-large, it’s difficult not to acknowledge his contributions over the years. At the same time, awards like the 2009 Polaris Music Prize and various MTV set-destroying performances have helped cement Fucked Up as an act loved by fans and respected by music peers.

Subcultures including but not limited to punk, cannabis, and pro wrestling are a particular interest of Abraham’s. He calls the groups “communities that exist without the conventional societal push for them to exist.”

Abraham spoke to High Times soon after Fucked Up wrapped its most recent U.S. tour—touching on topics including plant education, cannabis culture, and the overlap between the subcultures he holds dear.

From Straight Edge to Cannabis Enthusiast

Before punk and the plant came into Abraham’s life, there was pro wrestling. As a kid, he recalls being the only one captivated by Wrestlemania 2 while at a friend’s birthday party. The isolated fandom would continue for years.

“It felt like something I did on my own,” he recalled. That wasn’t the case with pot and music.

By 14, he and a group of friends were smoking a bit of weed while being self-described “shit disturbers” in the Toronto area. A minor run-in with the cops forced Abraham to step away from his friends at his family’s insistence. Despite being terrible at sports, he was sent to a sports camp to become a counselor. While there, he met a similarly minded counselor-in-training.

The eventual friend hit all the marks for Abraham: He was into Sonic Youth, graffiti, and also smoked weed. Pot took a backseat to the other two interests for several years. At 16, he accepted the straight edge punk lifestyle, abstaining from alcohol and drugs, including weed. The practice would continue for years, with Abraham still abstaining from drinking.

That immediate connection led him on a years-long journey, learning about the plant and its impact on the body.

“I certainly have other things in my medicine cabinet, but cannabis is my go-to medicine,” said Abraham. Now in his early 40s, Abraham continues his plant education, hoping to get into growing and genetics more in the near future.

Evangelical-level passions have led Abraham on several fulfilling career journeys so far in his life.

Beginning in the middle of the last decade, written and video journalism pieces from Abraham started to highlight the emerging world of cannabis. Abraham’s work also includes wrestling-centric pieces. In 2018, he and Vice Canada produced The Wrestlers, a 10-part series examining global wrestling communities. Cannabis did not play a part in the series. Instead, episodes included in-depth looks at different wrestling worlds, including the revolutionary Fighting Cholitas of Bolivia, the voodoo-wrestling crossover in the Congo, and performing on Canada’s First Nations reserves.

But most of all, he wanted to use the show to highlight “the ultimate art” wrestlers create, sacrificing their bodies every night in the ring. Wrestling fans have asked for a second season, but Abraham isn’t sure where to turn with Vice Canada shuttering during the first season’s production process.

“I don’t even know who to talk to now, but I’m trying to do more of it,” he said, noting that pro wrestling has tons more stories to tell.

The Importance of Proper Pot Education

While each subculture is a passion and holds a spot in his heart, Abraham is quick to point out that cannabis’ journey to becoming a subculture and eventually reaching the mainstream has been more complicated than the others.

“I think cannabis had a harder path to exist and to thrive as a community at different times and at different places,” he said, acknowledging the ills of the drug war and its ongoing global adverse effects, often on marginalized communities.

Later in our conversation, Abraham called Harry Anslinger, often regarded as the architect of the drug war, “One of the great war criminals of the cannabis war.”

Erasing the stigma around cannabis use continues. As does creating a mainstream public awareness of the plant and its science. A particular sticking point for Abraham is how “We built this industry on indica and sativa,” citing the oft-held notion that indica produces sedative effects and sativa creates uplifting effects. While true in some cases, indica and sativa are meant to describe a cultivar’s shape and plant structure, not results.

“I’ve seen people dab Congolese Haze, which is apparently a pure sativa, and I’ve seen people pass out,” he said. On the other hand, he reports smoking indicas in the morning and having an effect similar to caffeine, especially when his now-teenage son was a newborn.

During the same period, Abraham realized how edibles helped him sleep during that time. But he doesn’t partake in Canada’s legal edibles market, claiming that he’s priced out due to dosage issues. A high-dose consumer, Abraham reports needing products with over 1000mg of THC potency to feel any effect. With Canada capping THC at 10mg per package, he’d have to buy and consume such large quantities that the cost or experience wouldn’t justify the effects.

“There’s people that I talk to that find an unbelievable effect with a 10 milligram gummy and…my dose is around a thousand milligrams,” he said.

Abraham claimed that his most productive night of work came when consuming roughly 5000mg.

“I did two articles for Vice, interviewed a guy, and saw Madball in concert,” he recalled.

Can Canada Reclaim Its Cannabis Culture?

Looking at the U.S., Abraham would like Canada to adopt specific state-level policies, notably consumption lounges. He likes the business model but, more so, finds value in its potential community building. He said that lounges and meetups were where he met growers and other informed pot enthusiasts, providing him with critical cannabis information.

Since legalization, he feels Canada has “put a lot of water on the fire” of the cannabis community, with the pandemic further clamping down on social gatherings, networking and information sharing. While he feels the market will improve as the public becomes more aware of the plant and its rules, he wonders if the optimism and energy can fully return.

“There should be a place where you can go, and it can be like a pharmacy,” Abraham said. He continued, “But there’s gotta be places like where I was in Colorado last week where they pulled out the jar and I could smell it.”