Comedian T.J. Miller Wants You To Be Present | Turn 420 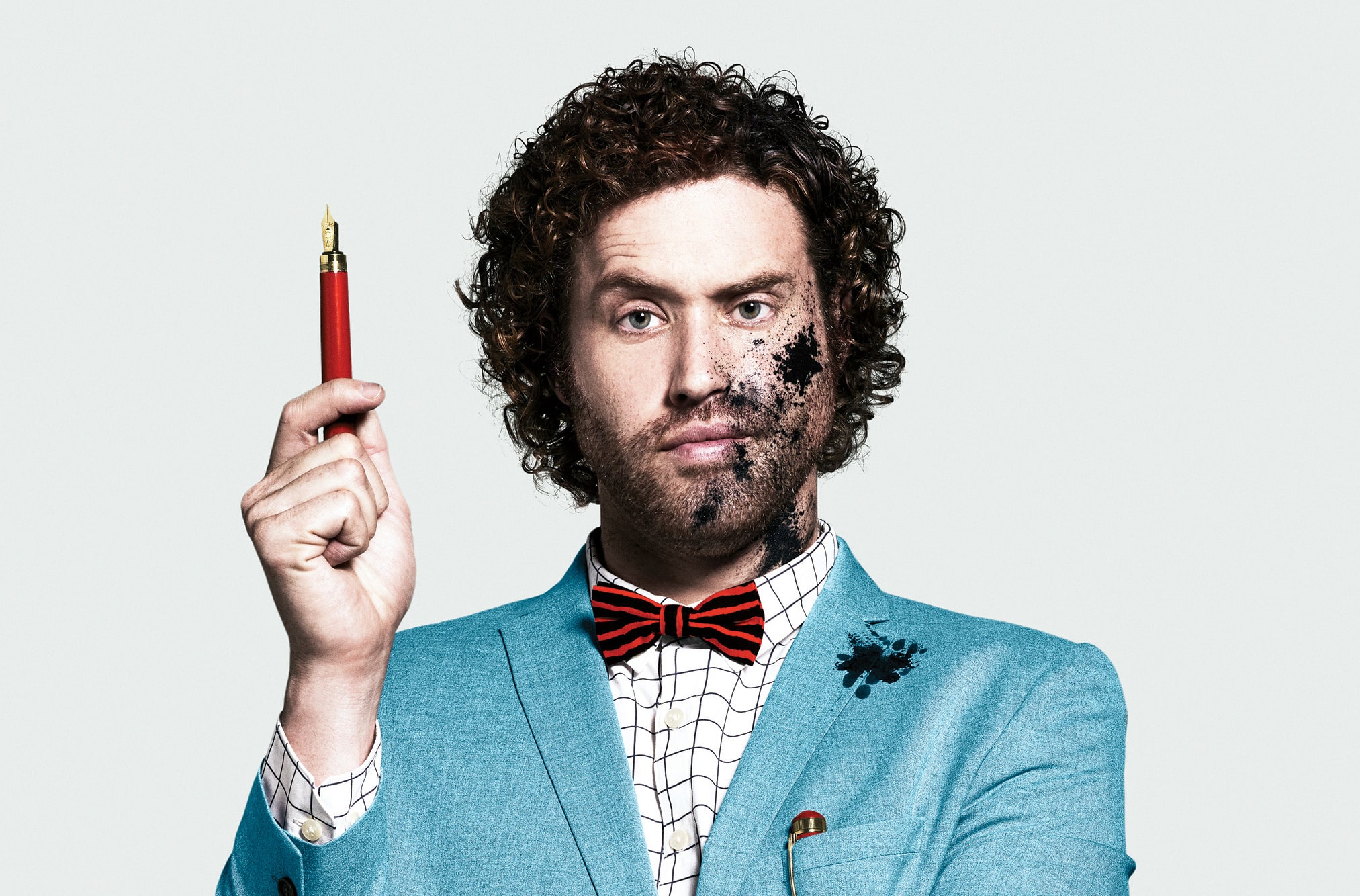 T.J. Miller is beaming. Fresh off the drop of his latest comedy special, he’s about to pause our phone chat to toast his wife when he gets some great news about a Christmas movie. And while film and TV are hitting for the comedian-turned-actor, he’s still very much attached to stand-up comedy and is focused on returning to his stand-up roots in the coming months and years, beginning with Dear Jonah, which is now available on YouTube.

While most comedians dream of Miller’s success on the film and television circuit, Miller is excited to be back on stage telling jokes—not just because of the pandemic induced hiatus—but because he’s now become more recognizable from his scripted entertainment endeavors than from the stand-up act that brought him show business success in the first place.

Over the course of our conversation, Miller reflects on his stand-up trajectory, the road to Dear Jonah, his eye toward the future of stand-up, and his hope for a future laced with organic, chemical-free buds that don’t induce too much overthinking nor too much lethargy.

High Times Magazine: Growing up in Denver, did you always know you wanted to be a comic?

T.J. Miller: I always liked cracking up kids in my class and would get in trouble for it all the time. I was usually in plays and would get a lot of laughs, but the first time I did high school theater—it was Dracula and I played the attendant for comic relief—and I remember that first huge laugh felt amazing.

I then pursued a lot of improv and actually stand-up comedy in a high school drama class. I credit my drama teacher Melody Duggan with being able to have the foresight to say “None of you guys will be able to do this for a living, but T.J. might be able to be a stand-up comic.” She was so cool. Nobody else was doing that at the time and I don’t think it happens a lot.

High Times Magazine: From that point in high school, was comedy cemented as your path?

T.J. Miller: It was more when I got to college and tried out for the comedy group. I was the only one selected that year after kind of blowing the audition away. I worked incredibly hard and was very lucky with this group.

Imagine this: You’re in college and then the group tells you they rehearse every single night 10 p.m. to midnight, Monday through Thursday. On the weekends you need to cut sketches, be in video sketches, and rehearse. It was almost like playing a sport.

By sophomore year, I decided to get a degree in psychology in case I needed to do it. Psychology is amazing, but you can really only affect a thousand people’s lives. But you can affect them completely as a psychologist. I figured with stand-up comedy and filmmaking, I’d be able to make an impact on hundreds of millions [of people] but only for an hour and a half.

That [to me] was the better thing to do, so I just threw myself full force into it.

Junior year, I studied at Improv Olympic and tried stand-up in Chicago and was hooked. It just seemed like the most complex and difficult thing in the world and I couldn’t wait to do it and that’s sort of how it’s always been since. I graduated, went straight to Chicago, toured with Second City, performed stand-up every night seven nights a week for three or four years, and then used my work ethic during that time to propel me forward.

High Times Magazine: Certainly 10 p.m. to 12 a.m.—Monday through Thursday—plants the seed for someone to have a successful career in stand-up comedy.

T.J. Miller: That’s exactly right. I learned that if you spend that much time on comedy, you’re going to get great. I took that to Chicago and really cooked up some great stuff.

And that’s what I really love about the special. It really does a great job showing people how I’ll really go with the flow, do whatever makes the show the best, and that the moment is important to me.

High Times Magazine: So in many ways, with this special, you wanted to capture the feeling of being present.

T.J. Miller: That’s exactly it. It’s everybody being present. Like, “Whoa, this is all happening. I feel very there.” I think that is the strength of this thing.

The special was like lightning in a bottle in how we caught [unplanned, awesome moments] and then it all happened to go so well that this guy who’s probably the biggest fan I’ve ever had became the actual star of the show. I just thought that was so neat. And I love that you feel really present in the audience because we rarely feel that when we watch a special or something on screen.

High Times Magazine: What are you hoping people take from the special itself?

T.J. Miller: One thing would be that I am a stand-up comedian. A lot of people just don’t know that. There’s a lot of people who are like, “Wait, he does what? He was awesome in Deadpool, let’s go see him in real life.” And then suddenly they see me and they’re like, “Whoa, you’re actually really funny.” So that’s kind of the most important thing.

T.J. Miller: I did a run of eighteen shows in ten days, two shows a night—and on some nights—it was three shows. I was preparing what I was doing during the pandemic—it was originally called The Pandemic Special—and I had all of these aims to get the funniest possible version of that out there. It was also kind of a time capsule, and it ended up that this kid changed the special for what it was completely. It became about him, which is why I renamed it Dear Jonah. Nobody wants to hear about the pandemic anymore and I think it’s almost more interesting that the special is more loosely about him than it is about me.

High Times Magazine: Let’s talk about cannabis. How is it part of your life?

Today I had an edible. It’s nice to be able to smoke when you’re not drinking. Most of the time now, I enjoy chilling down and looking at things differently. Weed is really nice for that.

In terms of material, I definitely do think of some stuff when I’m high. Again, it’s shifting your perspective, but I wouldn’t say I need it for creativity, and I never go on stage when I’m high or drunk. It requires too much effort. I’ll drink while I’m on stage, if everybody’s partying, but I won’t really smoke before I go on.

I used to do a quick toke before meet-and-greets and that was really fun. I’m so interested in people—but you’re meeting twenty-five to fifty people—so it was fun to get a little high and interact because they’re all drunk or high as well. [Laughs] Like, none of them are sober. So that was a fun way to do those.

High Times Magazine: When you do consume, do you have a preference on Sativas or Indicas?

T.J. Miller: It’s interesting, I used to be a Sativa guy but then I got too “overthinky.” Like, “Am I thinking this because I’m high or is it all in my head?” I don’t have time for any of that shit. So I moved over to Indicas, but now the Indicas make me kind of sleepy. So I’ve been doing hybrid-leaning Sativa. People keep pushing these Runtz on me, but I don’t know about all of that.

High Times Magazine: You have to find what works for you.

T.J. Miller: And everybody’s affected by it differently. I have a lot of pride in the legalization of marijuana but I’m waiting for that wave of organic, sun-grown marijuana. Chemical-free marijuana. I think we need that. It’s gotten to the point where weed is super powerful and is too chemically.

My favorite thing recently is a strain called Rozé, which the dispensary lady said “Feels like you’re tipsy on Rosé.” Initially I was like whatever, but then I tried it and it’s fire. It feels exactly like you’re tipsy off Rosé, which is hilarious, and I think will be a successful strain.

And while I’m not an everyday smoker—more of a few-days-a-week smoker—it’s cool to smoke weed everyday. I think we can both agree about that.

Follow @teenagemillionaire and check out https://tjmillerdoesnothaveawebsite.com for tickets, tour dates, and his latest special Dear Jonah.