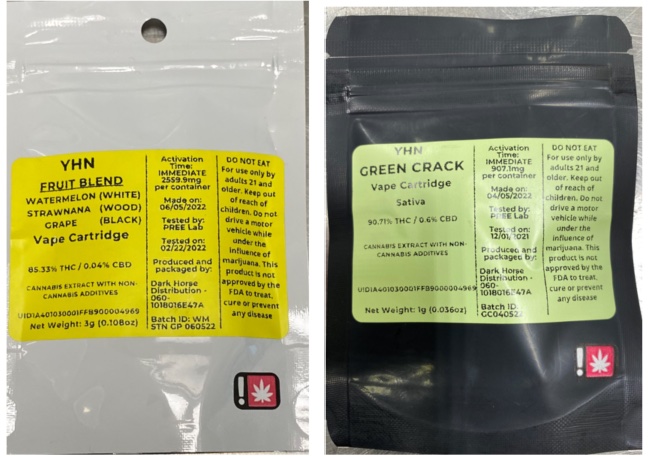 Oregon has issued a recall of more than 18,000 vape cartridges. Here’s how to determine out if your cart has been recalled.

Earlier this month investigators with the Oregon Liquor and Cannabis Commission (OLCC) discovered that more than 18,000 THC vape cartridges sold in Oregon between November 2021 and July 2022 contained an unapproved non-cannabis additive that may cause respiratory health issues.

The OLCC has issued a recall of those cartridges, which were made by YHN and sold at two stores in the eastern Oregon town of Ontario.

Weedology and The Bud House, the two Ontario dispensaries that sold the vape cartridges, have voluntarily removed the recalled YHN products from their shelves.

So far, the OLCC has not received any reports of consumers with negative health impacts as a result of using these YHN products.

Any consumers who’ve purchased the unapproved products are encouraged to return them to an OLCC-licensed retailer or to destroy the product. Those with health-related concerns regarding the recalled vaping products should contact their medical provider.

Here’s what the recalled vape cart labels look like:

During their ongoing independent investigation, OLCC officials tested an array of products from the brand YHN and found that some of their flavored inhalable cannabinoid cartridges may have contained soybean oil. Soybean oil contains triglycerides, which are prohibited in vape products
in Oregon.

Soybean oil is classified as a generally recognized as safe (GRAS) food additive by the U.S. Food & Drug Administration. But that classification is based on oral ingestion, not inhalation. When soybean oil is heated into a vapor and inhaled, the triglycerides within soybean oil may cause a variety of long-term and short-term health issues, including lipoid pneumonia, a rare form of lung disease that leads to lung inflammation and breathing issues.

According to the National Institutes of Health, incidences of lipoid pneumonia have ticked up with the rise in both nicotine and THC vaping.

“Vaping is defined by the use of electronic cigarettes that produce inhaled aerosols by heating a liquid…comprised of oils containing a variety of chemicals, including, but not limited to, nicotine, artificial flavoring, and/or cannabis,” according to an NIH guide that was last updated in June 2022. “One case series done in North Carolina…looked at 5 cases during July and August 2019 of previously healthy individuals without underlying comorbidities who all had a common exposure to vaporized aerosols and presented with acute hypoxic respiratory failure requiring hospitalization.”

The 2019 EVALI vape lung outbreak, which killed 60 people and hospitalized more than 2,800, was caused by illicit-market THC vape cartridges that contained vitamin E oil. That oil had been FDA-approved for a variety of products—but not for inhaling as a vapor. In the wake of the EVALI outbreak, Oregon and some other legal cannabis states implemented strict rules prohibiting certain additives such as vitamin E oil, squalene, and propylene glycol in cannabis vape cartridges.

The health risks associated with soybean oil inhalation have also been observed in food flavoring and production factories. In 2002, there was a mysterious outbreak of bronchiolitis obliterans in a microwave popcorn factory. In an investigation by the CDC, officials found that the lung issues experienced by factory workers came about as the result of inhaling the aerosol byproduct of heated soybean oil.

Further penalties depend on intent

In the OLCC’s investigation of the YHN vape cartridges, which came in flavors like “Fruit Blend” and “Green Crack,” independent testing confirmed the presence of components matching those inside soybean oil, a banned vape ingredient in the state of Oregon, and found that YHN’s labeling was only partially compliant with Oregon regulations for inhalable cannabinoid products.

YHN may face a $4,950 fine or the cancellation of the company’s cannabis license. Those are two very different outcomes, and the penalty may depend on the OLCC’s determination of whether the inclusion of the prohibited additive was an intentional violation or an unintentional oversight.

Will social equity in Illinois live up to the hype?