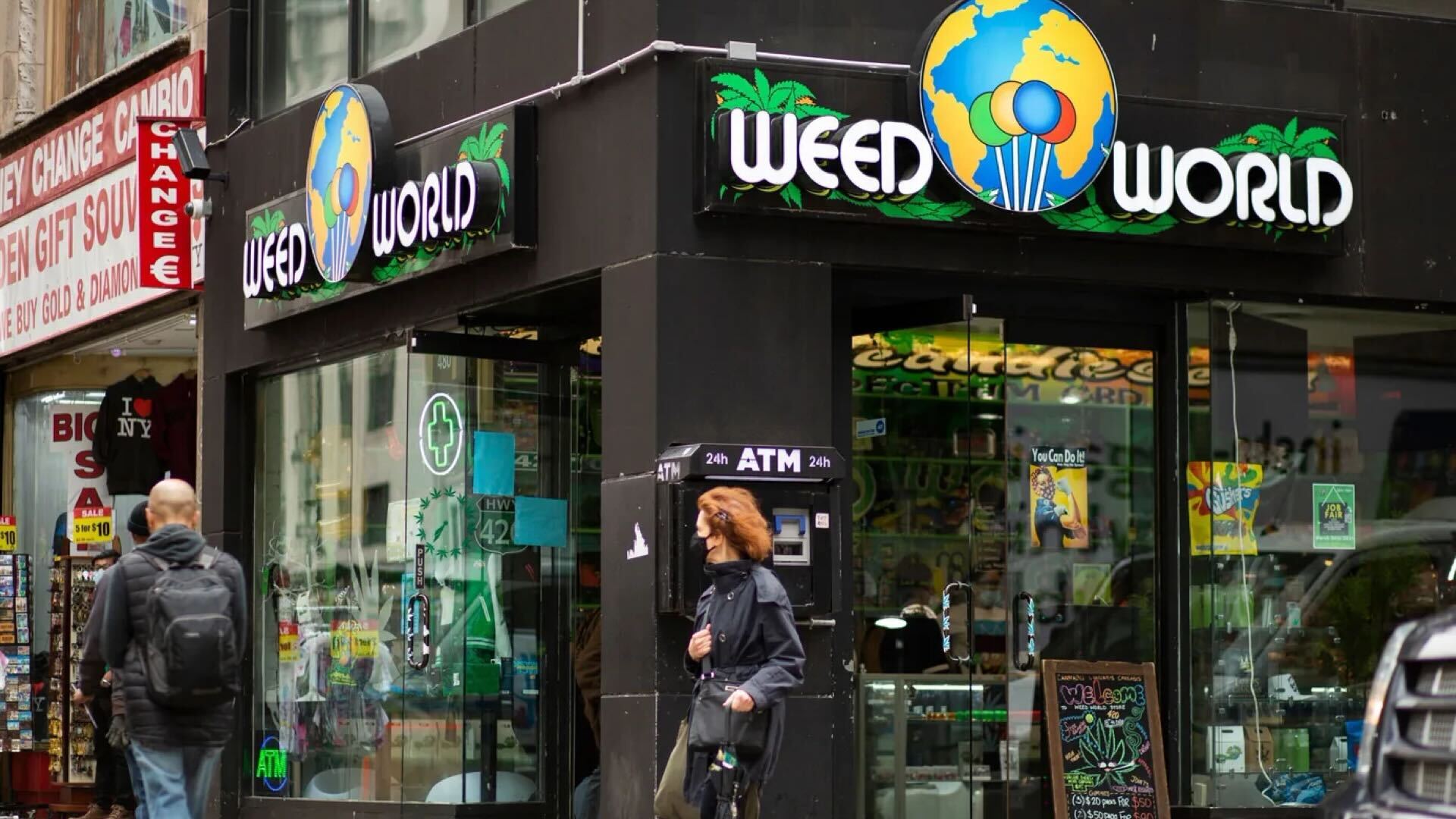 The trucks known for selling ‘fake edibles’ got popped for not having Department of Health permits. We talked to the owner about plans to open a legal dispensary.

Is New York’s war on “illicit weed” about to heat up? The NYPD seized 19 vehicles last week for selling cannabis products without a permit.

But many of the sellers who got busted don’t actually offer illegal marijuana. They’re notorious for selling hemp and CBD-infused lollipops that sucker tourists in. Those looking for THC-infused products are commonly disappointed, which is why the store has a 1-star rating on Yelp. Still, they don’t appear to be breaking any drug trafficking laws, contrary to news reports last week.

The roundup of Weed World trucks may signal the first of many wrist slaps for unlicensed cannabis dealers—something that NYC Mayor Eric Adams promised back in June—as the city prepares to launch its multi-billion dollar legal market.

NYPD’s Chief of Patrol Jeffrey Maddrey tweeted last week: “If you are looking to buy illegal Cannabis from the Weed World Bus located on 5th & 40th street it is no longer open for business. We do not anticipate it opening for business anytime!”

“Up in smoke… 19 illegal vehicles and cannibis [sic] seized off the streets of NYC. While others follow the rules, these trucks and their vendors don’t have permits so we took action!”

Here’s why the vehicles were confiscated

The vehicle owners are not accused of selling cannabis. The vans were confiscated for not having licenses from the Department of Health. Complaints were initially made to NYC311, the city’s non-emergency government service line. Police officials said they seized the trucks “to address quality of life.”

“New Yorkers have spoken, our Business Districts have spoken,” tweeted Maddrey, who has been Chief of Patrol since late May. “My Community Response Team (CRT) is currently engaging these illegal cannabis trucks who are selling consumable items in New York City without a license from the NYC Department of Health. Stay off our streets!”

The irony of the high-profile seizures: Many of the busted trucks belong to a company that controversially advertises “weed candies” with less than 1% THC.

NYPD officials singled Weed World Candies out publicly, but it’s not the only party that got popped. Of the 19 automobiles, at least nine of them were WWC’s, while at least two of them were from the lesser-known Hemp On Wheels.

Back in June, NYC seized a dozen Weed World trucks due to $504,000 in parking debt. “This has absolutely nothing to do with marijuana,” Deputy Sheriff Maureen Kokeas asserted at the time. “It only has to do with unpaid debt,” Kokeas added.

Is the recent flex of force meant to be an example for unlicensed sellers who are providing THC ahead of the legal market? Or is Weed World being hassled by regulators and competitors who want to knock them out of their valuable Times Square locations before they can secure a license?

The OCM and Mayor’s office did not respond to Leafly’s request for comment on this story, but Weed World Candies’ owner Bilal Muhammad did. Here’s what he had to say about the recent legal issues, and his future plans to become a licensed operator through New York’s CAURD program.

For most New Yorkers, the idea of Weed World actually selling cannabis that gets you high would be a relief. Even if it’s illegal (for now), at least it’d mean they’re finally being real.

But Muhammad insists his company is participating in the same marketing practices that give us strawberry flavored bubblegum and soda.

“Get some strawberry bubblegum, and read the pack,” Bilal tells critics of his advertising. “There’s a big strawberry, and under it you see artificially flavored.” Muhammad explains that this is “the marketing aspect of any product.” He adds: “You see big juicy strawberries. So in the consumer’s mind, they think, man, this company is putting some big strawberries in here.”

While longtime New Yorkers roll their eyes, most tourists marvel at the Weed World trucks and Times Square storefront. Both the vehicles and the brick and mortar shop appear to be selling weed in the open. Which is why the store name and plant-adorned branding inspire a common question: “How do you do this without getting caught?”

Muhammad confirmed to Leafly that Weed World’s candies have a legally low percentage of hemp-derived THC (presumably under the 0.3% federal limit). He got the idea for the company after reading Jack Herer’s hemp manifesto The Emperor Wears No Clothes. Muhammad started in Alabama, then Atlanta and Miami. But he was eventually drawn to New York City.

In 2019, New Orleans police claimed Weed World trucks were a “a scam designed to dupe unwitting tourists into paying high prices for candy that doesn’t contain any THC.”

Muhammad insists that his salespeople are honest about the THC content of their products. But the name of his trucks and Times Square storefront still attract shoppers who don’t know any better.

“We’re not giving out blunts,” Muhammad told the Daily News in 2013. “We can’t guarantee that everyone is going to get high.”

Some feel WWC’s vendors and marketing materials don’t make that fact clear until it’s time to dissuade drug enforcement agents. But Muhammad says anyone who feels duped can come claim a free eighth (3.5 grams) of real THC-charged gas once Weed World gets its CAURD license.

As for the recent issues with the city, Muhammad says “it’s just propaganda and hype.” He believes the recent pressure from the city is driven by three motives. One, he feels city leaders want to set an example that discourages Weed World copycats who actually offer THC-infused products.

“Since we’re the most visible, a lot of the newcomers try to imitate our style so they can play off of our advertising,” Muhammad told Leafly on Tuesday. “They’re going after those [illicit] guys, but using us as the face of it.”

Muhammad said he also thinks city officials want to clear the way for larger cannabis operators to claim WWC’s valuable real estate. “We have brick and mortar in certain locations they would like to be in. But you can’t have a dispensary so close to the next one. So they’re trying to make way for the big companies.”

Finally, he said last week’s bust was triggered by disapproving store owners in Times Square and the Garment District, who Muhammad suspects of calling the city to complain about the recent rush of gray market sellers. Even if Weed World wasn’t selling ‘real weed,’ they were easily lumped in with the illicit crowd since they’ve been the most visible vendors around for almost two decades.

After the legal hassles Weed World Candies survived pre-legalization, Muhammad thinks his company is the perfect candidate for New York’s social equity program. He said that his company is a rare example of a social equity applicant that already has the capital and infrastructure needed to launch quickly and successfully.

“We’re ready to turn our application in for the license right now,” Muhammad said just two days before the app portal was scheduled to open (August 25). “We’ve been set up and structured for this,” he added. “Ever since legalization, this was our goal.”

Muhammad admitted that back in 2004, when he and his partners first arrived in NYC, they “never thought it would come to this.” This being a legal adult-use market in New York and neighboring states.

He explained: “We’ve just been on the frontline advocating, taking a lot of the hits along the way… We’re the ideal people or company that should come into this legal market because of what we’ve been through. Pushing the envelope about this whole cannabis agenda.”

His future vision for the THC-infused Weed World is “generally the same set-up and concept,” as now, “but with the real shit.” Muhammad promised, “we’re gonna have top-of-the-line strains and all the fire stuff at a good price.” And don’t forget, free eighths for anyone who’s still mad about that $20-30 they dropped on Weed World’s current THC-less formula.

WWC launched in 1999, and now runs a storefront one block from Radio City Music Hall in Times Square. The company website states that its main goal is “to get marijuana and hemp legalized and industrialized.” WWC also states clearly in its FAQs: “We follow state laws and regulations that allow us to make customers happy while staying within the guidelines of the law.”

That hasn’t stopped them from dealing with nearly a dozen run-ins with law enforcement in different states. In August 2004, a truck was busted in Manhattan at St. Marks Place. Muhammad recalls, “We were only selling hemp lollipops.” But officers charged them with the weight of the candies, converted to flower. The allegations led to a week in jail, and racketeering charges that failed to stand up in court.

Both the founders, and a curious customer who was swept up after simply inquiring about the business at the wrong time, were held as flight risks, while a white business associate from Portugal was granted bond.

A Weed World truck in Illinois faced a similar charge until a judge realized that the 20 pounds of marijuana cops reported was actually a load of hemp-based lollipops. Then there are the two incidents in Alabama (2015, 2016), and one in Louisiana (2015). After the 2015 arrests, local authorities tested the products and found no THC.

Despite the hassles and fines, WWC successfully opened another location in New Orleans back in 2019. At the time, Louisiana’s Advocate wrote, “If Weed World products really are infused with ganja, that’s distribution of a controlled substance. If the whole thing is a con, a license is still required for hawking candy on the streets, and Weed World doesn’t have one either here or in New York, Chicago and other cities where green vans ply their trade.”

With New York’s legal market ramping up, will the city’s most controversial cannabis brand successfully turn their placebo pops into a valid path to a legitimate dispensary? Or will regulators and law enforcement deliver enough legal licks to make their infamous lollipops disappear?

The world will know soon enough. New York’s adult-use market is poised to open later this year or in early 2023.