6 tips for marketing cannabis on TikTok and Instagram | Turn 420 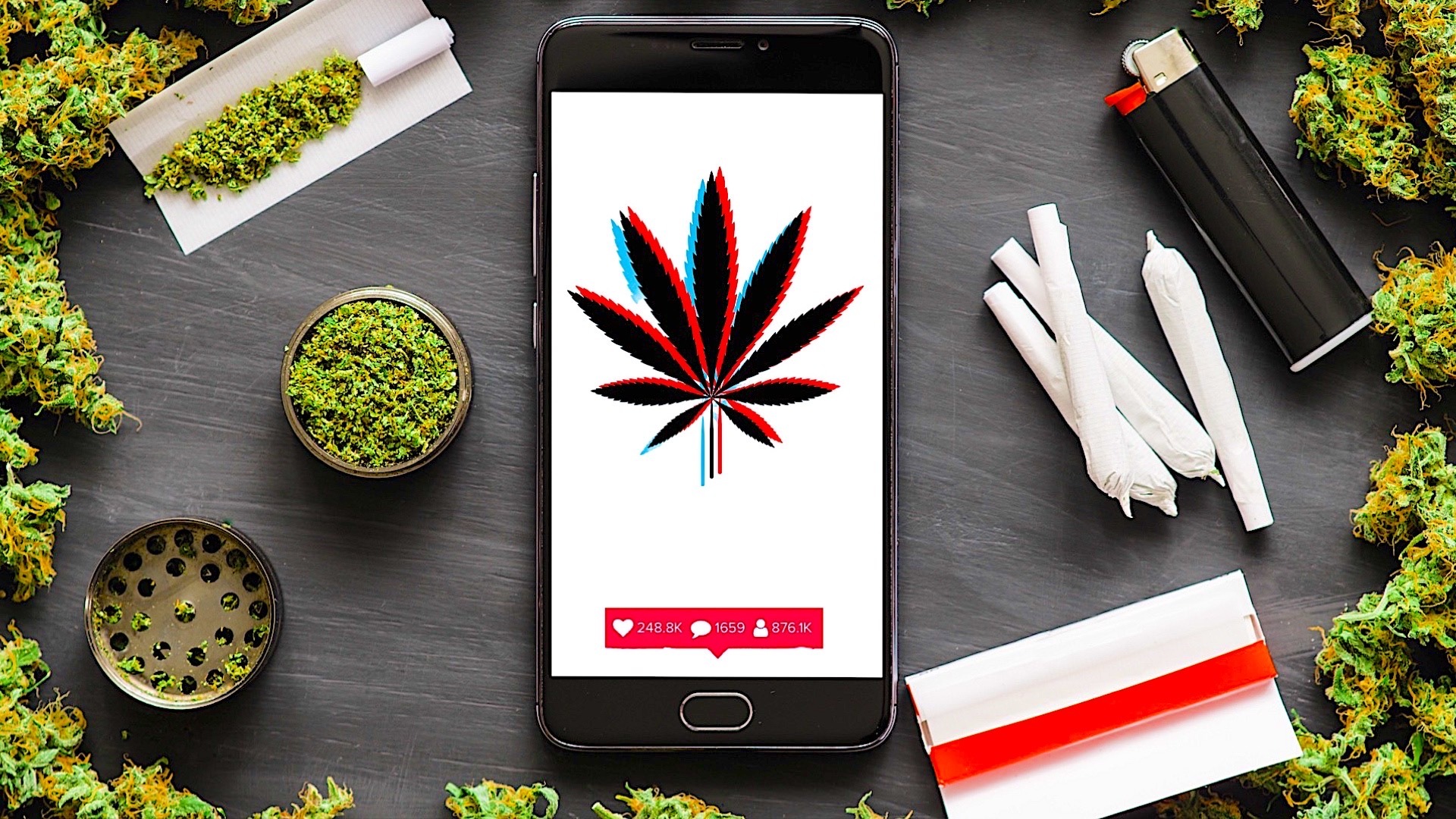 Social media is the double-edged sword of cannabis marketing. Here are five ways to slice through the noise.

Social media isn’t the only option for cannabis marketing, but it’s by far one of the most effective.

The competition: The FCC forbids radio and television ads for weed (for the time being), and those channels don’t reach younger demographics anymore, anyway. Then, you have Search Engine Optimization (SEO), a long-term grind that changes with every Google algorithm update. Email marketing is a powerful tool as well, but it requires community outreach, careful curation, and the deployment of dedicated writers, which many businesses simply aren’t ready to execute.

All of those barriers make social media the best gateway for many cannabis brands to reach niche fans and mass audiences. Instagram and TikTok are the undisputed marketing channels for future generations:60% and 70% of each respective platform’s audience is made up of 18-to-34-year-olds, according to HootSuite.

Interestingly,  the audience demos on social media sometimes  parallel the age distributions we see across the cannabis community. For instance, Millennials currently make up 60% of all cannabis consumers, and although Gen Z only makes up 12%, they constitute the fastest growing age group with more members reaching the legal age to purchase every day.

As social platforms continue to set the rules for modern marketing, it’s essential for cannabis brands to navigate these spaces with grace. Here are six tips for lighting up the world’s hottest social media platforms as a cannabis marketer or influencer.

The name of the game on Instagram and TikTok is discovery. The ability to discover new people, products, music, and information is what’s made both platforms ubiquitous over the past decade. The folks behind these apps create algorithms that spit out new bits of content tailored to viewers’ interests. That means your endless scrolling of cute cat videos is by design. And that you can use the same algorithm to help people discover your content about cannabis (or catnip).

Over the past five years, Instagram’s algorithm has become pay-to-play, thanks to the platform’s robust advertising services. It’s now difficult to get your Instagram content seen without sponsoring it. But if you’re willing to pay, it’s one of the most efficient ways to spend your ad budget. Sadly, that’s only an option if your brand or products can pass META’s strict ban on cannabis-themed accounts and content. Another issue: Content formats like Instagram photos don’t gain the traction they once did since Instagram Reels is being pushed to compete with TikTok’s short form video style. Instagram’s shift to reels and paid ads has allowed TikTok’s algorithm to pick up steam. On the video editing app, users are able to achieve exponential growth in a matter of months or even weeks by posting and tagging videos strategically.

David Hawkesworth (@CampCanna on TikTok), a leading cannabis influencer, who grew his TikTok following to 850,000 people after starting his page in January 2021. The feat is impressive when you take into account TikTok’s harsh censorship of cannabis. But shortly after we spoke to Hawkesworth, his account was zapped by the platform, forcing him to start back at zero.

Algo-speak is a new-ish term for the specific language creators use to avoid the algorithm’s detection. Through trial and error, cannabis community members have learned the best practices for circumventing restrictions, including clever abbreviations and slang that can elude censors.

Hawkesworth stressed the danger of posting on his @CampCanna account without intense self-censorship.

“Hashtags like ‘cannabis’ ‘weed’ ‘420’ ‘stoner’ are the equivalent of putting a target on your back that gets you grouped under illegal activity. TikTok forces creators to use slang and urban euphemisms to create their content which builds a ‘You know if you know’ clique of fans.”

And your comments aren’t safe, either. You’ll light up the algorithm if you comment anything like “DM me” or “Msg me,” because it’s been programmed to identify spammers and solicitors. This practice is restrictive, but it protects the user experience and keeps things feeling organic. So don’t let the algorithm of either platform think you are one of the many fake accounts claiming to have Cookies or Runtz for the low.

Slowly, you’ll notice certain hashtags or words that slip past the censors. So while you can’t search the word ‘weed’ on TikTok, you can browse budtender videos (for now). Over time, the algorithms are updated with new censored terms. But the community will adapt, and so will you.

Get creative (without weed)

You shouldn’t even type the word “weed’ on these platforms, so picturesque nug shots are also off of the table, for the most part. Instagram has traditionally been more accepting of flower shots in content but Sarah ElSayed, Content & Influencer Manager at Ardent Cannabis, has learned that people can fill in the gaps if you provide symbolic replacements for the word or flower itself.

ElSayed is best known for DIY recipes, but she has also found success creating viral content for Ardent’s TikTok. ElSayed mixes her cannabis content into more mainstream niches like astrology, food, and music without explicitly referencing the plant. Her advice: “Replace any cannabis visuals with mullein or broccoli to avoid any bans while still trying to educate.”

For NotPot, a U.S. CBD brand, it made sense to team up with Venice-based branding agency, GRTR, to launch the @NotPotDealer TikTok account. The first @NotPotDealer video alone generated over 2.3M views and 560k likes without a single picture of a nug, joint, or bong.

“We equipped a few mysterious figures with $5,000 dollars to create insane stunts like DIY painted skateboard decks and blowing up cars. The result was an intriguing, viral hit.” – Charlie DePew, Head of Production at GRTR.

Preparing for the worst means always having a backup social account ready. Don’t take the chance of starting a cannabis social account without also securing a back-up page you can switch to if your account gets zapped.

Even if an account is not removed, it can still be negatively ranked by the algorithm, commonly known as shadow-banning. This means your page will not show up on discovery pages or search results unless a user knows exactly what page they’re looking for. For each new social media account, create a backup account that can grow passively in the background.

Earlier this year, @CampCanna dealt with a blocked account at 200,000 followers after a surge of mass flagging by bot accounts, but he was lucky to win an appeal within one week. “It turns out that there is no protection against mass reporting. If the platform gets enough notifications or numerous reports, the algorithm will just shut your account down now and ask questions later. But you can submit an appeal,” he explained.

After our interview, @CampCanna was banned, forcing a move to the @WorldWideStonersClub page. Hawkesworth’s loyal following on the Discord platform helped alert his most engaged fans of the move. And even while he waits for a possible appeal, his influence on the platform is still on clear display. Simply searching the phrase “camp canna” on TikTok returns posts that have collected over 33 million views.

Runtz co-founder and Joke’s Up CEO Yung LB had his 220,000-follower @YungLB_Litt Instagram account suspended numerous times for promoting the plant on Instagram. He quickly pivots to backup accounts like @official_YungLB, which has an audience of just 14,000. But while he and other canna-influencers have had their main accounts restored by Instagram and TikTok after appeal, the appeals process is arbitrary and can be inaccessible without help from representatives at each company.

Don’t pool all of your posts on one platform. LinkedIn, Twitter, and Pinterest are all relatively 420-friendly social media platforms that are worth investing time in. Even if they don’t do insane numbers like Instagram and TikTok.

For B2B relationships and network-building, LinkedIn is a safe haven for the cannabis community. But it doesn’t provide much opportunity for acquiring new consumers and community members for marketers. You’ll also notice that a lot of folks are hesitant to engage with cannabis content on the professional platform. But that doesn’t mean they don’t see it.

Twitter and Pinterest each have their merits, but they don’t rely on discovery in the ways we outlined above. The best way to feel out these communities is to follow accounts that are somehow similar to yours, then put your own spin on the strategies you see work for others.

Before you branch out, be aware that each marketing strategy needs to be tailored to the specific platform. This is not a one post fits all scenario. So think about how TikTok and Twitter might react differently to the same piece of content, and tailor it accordingly. Keep track of what works, and where, then keep tweaking it along the way.

To use Instagram and Tiktok is to be a guest who is beholden to their respective house rules. Don’t kid yourself, these platforms truly own your account and the following you build around it.

The ultimate goal for content creators on these platforms is to gain user data like emails and phone numbers that can be used to reach fans outside of the app. These data points are the building block of newsletters, live event activations, and maintaining long-term communication with audiences in the event of a banned social account.

In this day and age, marketing on Instagram and TikTok is no easy task. But the cannabis community has always been resourceful enough to thrive and shine in spite of the lurking shadow of prohibition.

So whip out that smartphone and see and get to work on cracking the latest discovery algorithm. And remember, if you can market cannabis, you can market anything.

Advice from Leafly’s best budtenders of the year

Meet Jacquelyn McTighe, one of Leafly’s Budtenders of the Year