Why does weed give you the munchies? | Turn 420 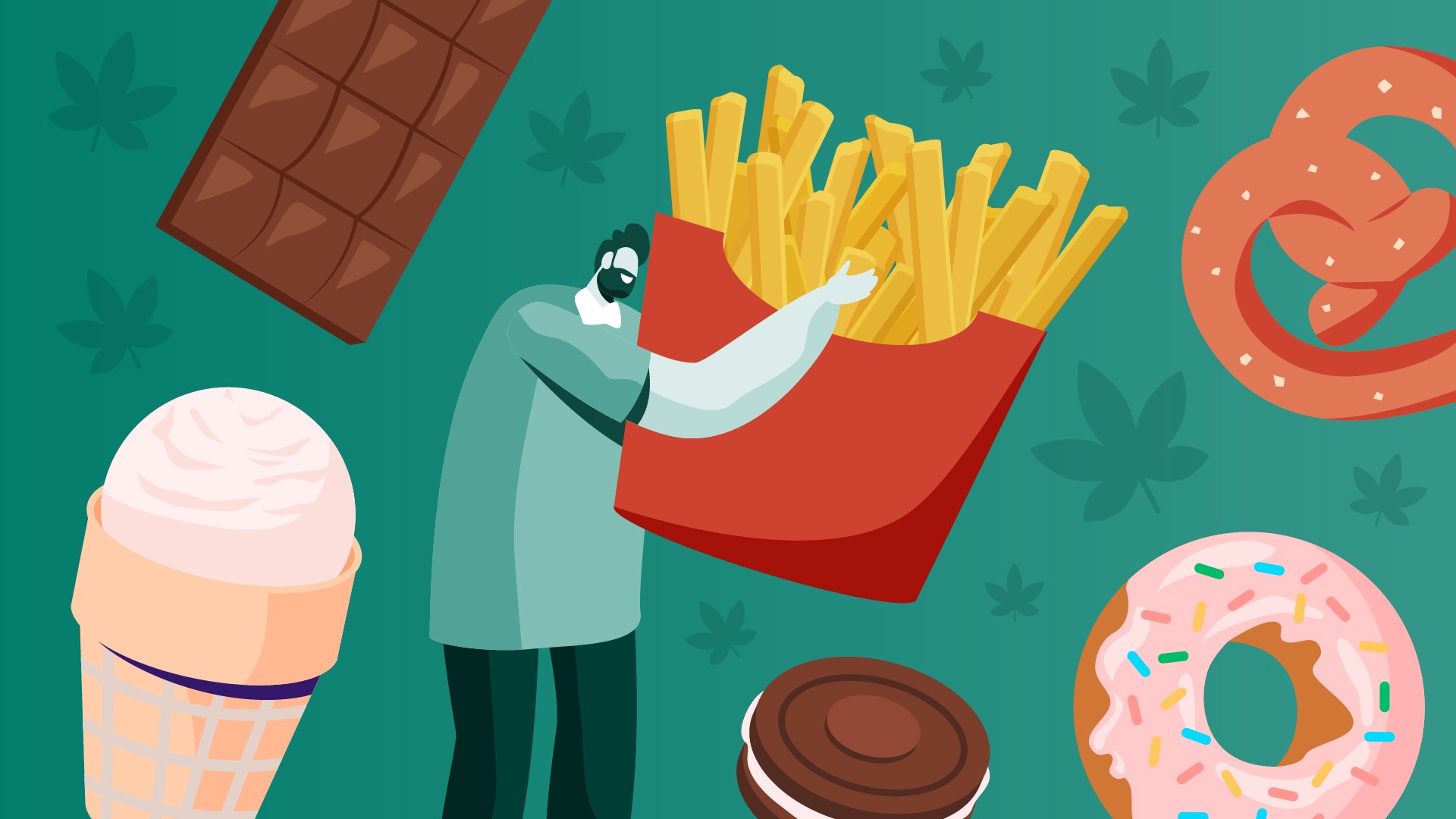 Potato chips, pizza, nachos—anyone who’s gotten high has experienced their own unique (or downright bizarre) snack choice when the munchies attack. If there’s one classic trope associated with cannabis, it’s a stoner with the munchies.

Weed can kick off fierce cravings and enhance your enjoyment of food. But why? Observations about the intersection of weed and food are believed to have been first recorded hundreds of years ago: Rajanirghanta, an ancient Hindu text that dates back to 300 CE, mentions the appetite-stimulating characteristics of weed.

Cravings for calorie-rich foods often prevail when the munchies strike. Big name brands tap into this by designing foods oriented toward the stoner palate: Think Ben and Jerry’s Half Baked ice cream or Jack in the Box’s Munchie Meals. Even McDonald’s, which recently rolled out its inaugural adult Happy Meal, is a fave. In fact, a whopping 43.4% of weed smokers admitted to hitting the Golden Arches when high in 2017, compared to 8.7% who opted for somewhat healthier sandwich options offered by Subway.

Here’s the lowdown on why cannabis can make you ravenous, the science behind weed cravings, and how to manage the munchies.

Why does getting high make you hungry?

One of the reasons that weed kicks off the munchies is because THC can elevate dopamine levels. Dopamine is a feel-good neurotransmitter in the body that’s released when we engage in pleasurable behaviors, like eating tasty food. Thanks to the influence of dopamine, we experience a particularly potent feeling of internal reward when we eat something salty, sweet, or super satiating. THC’s influence on the dopamine system means that food tastes and smells extra appealing when we’re high.

In addition, THC’s ability to stimulate these receptors can heighten the experience of food, making it even more enjoyable. Weed consumers with the munchies often report that food tastes, smells, and feels particularly good after consuming THC, enhancing the overall experience of eating.

Beyond the brain, THC also promotes the release of ghrelin, a hormone secreted in the stomach that stimulates hunger. This combination of biochemical processes can culminate in a hedonistic experience, making even the humble saltine cracker taste irresistible.

“For me, being high affects the feels around eating food the most,” says Caleb Chen, founder of The Highest Critic, a website that explores the intersection of cannabis and food. “I’ll take more time to enjoy it over more bites, even saltine crackers.”

David Wicks, CEO of seed-seller BudChampion, believes there’s an aspect of conditioning that drives the munchies: You get high and crave snacks; snacks taste better because you’re high, and voilà — a reinforcement loop is created.

Do all strains cause the munchies?

The higher the THC content of a strain, the stronger the munchies can be.

In a study on cannabis’ effects on the appetites of men with HIV, higher doses of THC correlated to greater increases in the hunger hormone ghrelin, thus elevating appetite.

THC’s ability to stoke appetite can be life-changing for individuals living with chronic illnesses such as HIV or cancer, who often experience a loss of appetite and cachexia (wasting and weight loss due to chronic illness). For example, one pilot study exploring the effects of cannabis on advanced cancer patients found that 17.6% of patients experienced a weight gain of 10% when taking cannabis daily.

While THC elevates appetite, other cannabinoids seem to have the converse effect. CBD can suppress appetite, as can THCV, which has garnered itself the name “diet weed.” If you’re looking to curb hunger pangs when you get high, strains high in THCV, such as Durban Poison, or strains with balanced ratios of CBD and THC, may be just the ticket.

Why do people crave certain foods when they get high?

Of course, unusual cravings can be a feature of the munchies. “I have had strange sardine cravings from time to time,” said Wicks. However, sardines represent the tamer end of the spectrum. “I have seen [a colleague] eat sugared pickles — and yes, that does mean pickles with a lot of sugar on them.”

The science of what we crave is actually relatively straightforward. Calorie-rich, fatty, and sugary foods can trigger major reward feelings in the brain on their own, so teaming these foods with weed can result in an extra dose of dopamine. Eating a sardine or sugared pickle when high can take your taste buds on a magic carpet ride.

The combination of different kinds of foods, like sweet and salty, may also feel irresistible. Caleb Chen recalls gorging on half of a watermelon while making spicy seafood ramen before realizing the melon’s potential as a noodle bowl.

“The savory, saltiness of the noodles was met at every bite by cold bursts of lightly sweet watermelon that would cool down the still-hot noodles,” he reflected.

Chen reports that he has tried the watermelon hot ’n’ spicy noodles when sober and they were just as delicious.

“That moment opened up my eyes to the possibilities of combining foods,” he said. “I know for sure I would have never mixed those two different items together if I wasn’t so high.”

How to manage the munchies

Being blindsided by the munchies isn’t ideal, especially if you’re unprepared.

“Einstein said time is relative—you will experience this first hand when you are high, have the munchies, and are waiting on your food, but the delivery is taking ages,” reflected Wicks.

If you’re concerned about binging on junk, think about loading your refrigerator with wholesome, satiating food that still hits those sweet, salty, calorie-dense spots. Guacamole, nuts, sushi, watermelon, berries, hummus with  veggie sticks, or  healthy bean burritos are all satisfying alternatives to bacon, sundaes, or donuts. Having a range of healthy snacks on hand means you’re less likely to head down to the corner store and clear out the potato chip aisle.

Chen also has words of wisdom to impart: “Don’t think about food that you can’t get.” Fantasizing about burgers or fries when there’s no way of getting them can only lead to heartbreak and unfulfilled hunger pangs. If you know what you tend to crave when high, make sure you have those snacks on hand. You’ll thank yourself later.

If you’re keen on  trying to avoid the munchies altogether, there are a few tried and tested techniques. For example, you could try eating at a nutritionally dense, satisfying meal before consuming cannabis. A full belly means yo’’re less likely to over-indulge on treats or fall victim to snack attacks.

Brushing your teeth  can also be a powerful deterrent: Sparkly clean teeth and minty-fresh breath can stop you from reaching for the cookie jar.

Finally, experiment with CBD and THCV-rich strains. As discussed above, THCV — aka “diet weed” — can deliver a heady, energizing high and suppress appetite. A few puffs of Durban Poison, Pineapple Purps, or Jack the Ripper can help you experience the high of THC, but without sparking off cravings for pizza—or sugared pickles.

Psychedelics may flatten your brain’s landscape, but in a good way