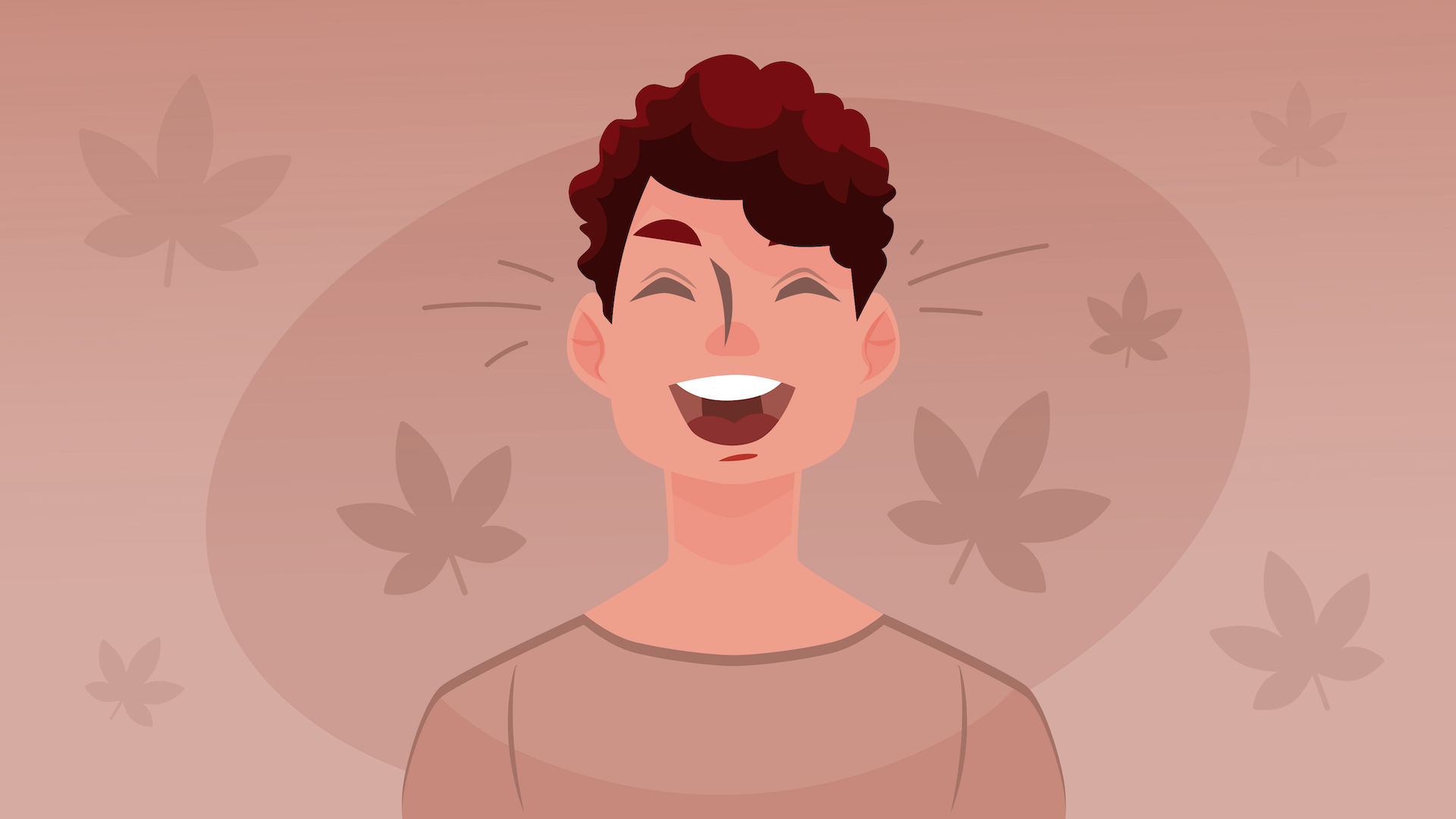 Pretty much everyone who’s ever used weed has gotten the giggles at some point. Authors Jack Margolis and Richard Clorfene perhaps best explain the hilarity cannabis can induce:

“Something that is genuinely funny, like hearing a good joke, can turn you into a convulsive maniac, writhing in agony and pleading for help. Going out in public in this mood can be a risky act because of the laughing problem, as you can find yourself laughing at people who are not stoned and fail to see what is so amusing.” — A Child’s Garden of Grass: The Official Handbook for Marijuana Users

So what is it about weed that can make everything funnier?

When you pause to think about it, laughter is a pretty wild concept. Spontaneous, unconscious, and primitive, laughter erupts from deep within us and is a language we speak and understand universally. And it’s not just confined to humans. Some animals laugh too—65 different species, according to some.

Laughter has a unique social dimension. People laugh way more when they’re around others. In a social setting, we’re thirty times more likely to laugh than when we’re alone. What’s more, laughter is contagious. Hearing the laughter of another can trigger a fit of giggles, as anyone who has ever heard the guffaws and snorts at a comedy show can attest.

The social element of laughter seems to have multiple functions. On a personal level, laughter makes us feel good. It also promotes social bonding, solidifies relationships, and de-escalates negative situations.

It may also hold health benefits: When we laugh, we breathe deeper, stimulate our hearts, lungs, and muscles, and increase the production of feel-good endorphins released by the brain. Laughing can reduce stress, elevate mood, relieve pain, and even boost the immune system. In other words, laughing may be one of the best medicines around.

Researchers believe there are two main types of laughter: involuntary and intentional. Involuntary laughter is a response to an outside event, like when you see something hilarious and double over laughing.

In contrast, intentional laughter is more controlled and often used to punctuate conversation and keep it friendly. Obviously, most of us chase the natural high you get from spontaneous, deep-belly laughter.

How can cannabis trigger giggles?

Studies exploring the connection between weed and laughter are few and far between. However, experts such as Peterson paint a broad picture of how cannabis influences the endocannabinoid system (ECS) and other bodily systems to trigger a laughing fit.

“The [endocannabinoid system] is the connection between all our different body systems,” said Peterson. The ECS interacts with our endogenous opioid system, the system responsible for producing endorphins, the body’s innate supply of opiates which are released when we feel pain, pleasure, or laugh.

It appears that THC interacts with certain endorphin receptors, making the endogenous opioid system more sensitive, explained Peterson. In other words, THC may make a person more primed to laugh.

Peterson suggests that cannabis may also influence oxytocin, a feel-good hormone that strongly influences social behavior. “Oxytocin is responsible for social reinforcement or the reward of being social,” said Peterson. “In short, oxytocin promotes prosocial behaviors like smiling and laughing.”

In general, weed works in diverse, complementary ways to create a context for laughter to come more easily. “The net effect is generally a disinhibition, or a softening, of our defense mechanisms,” said Peterson. “This allows us to laugh more freely and enjoy the feeling of laughing.”

However, it’s important to note that tolerance and dosing also influence the degree to which cannabis makes us giggle, and low doses may be different than high doses. So if you’ve noticed that your weed-induced giggles are on the wane, it may be time for a reset.

Strains, terpenes, cannabinoids: Are some funnier than others?

While the science behind weed-induced laughter is scarce, dedicated cannasseurs claim that some cultivars just seem to induce laughter more, according to reddit. Some swear by cake strains, while others prefer Tangies.

According to Leafly reviewers, some of the most popular strains to give you the giggles include Blue Diesel, Chemdog, Sweet Diesel, Black Diamond, Mango Kush, Church OG, and the aptly named Laughing Buddha.

Dan Wilson, editor of Visit Hollyweed, believes the link between cannabis and laughter is facilitated by the plant’s ability to boost mood. Anecdotally, many consumers also point to certain terpenes as promoting relaxation and a readiness to laugh. “Terpenes in cannabis can have antidepressant properties—such as linalool and beta-pinene,” commented Wilson. Other stress-relieving terpenes, such as caryophyllene and myrcene, may also elevate mood and help you feel ready for some frivolity.

However, Wilson points out that too much THC can also lead to anxiety, which will, of course, dampen hilarity. In this case, the presence of CBD may help mellow out THC’s effects.

Ultimately, deducing which specific compound in weed holds the key to laughter is overly reductionist. Instead, it’s likely an entourage effect exists—the idea that the sum of all the compounds lead to certain effects. Set and setting likely also play a big role, which is why getting high in a group of friends is particularly funny.

“Smoking weed has always brought people together, made them more social, and given an air of fun and happiness,” said Wilson. “It’s part of weed culture to laugh and enjoy life. That’s something that the plant teaches us.”

Glioblastoma is a devastating brain cancer. Does cannabis help?