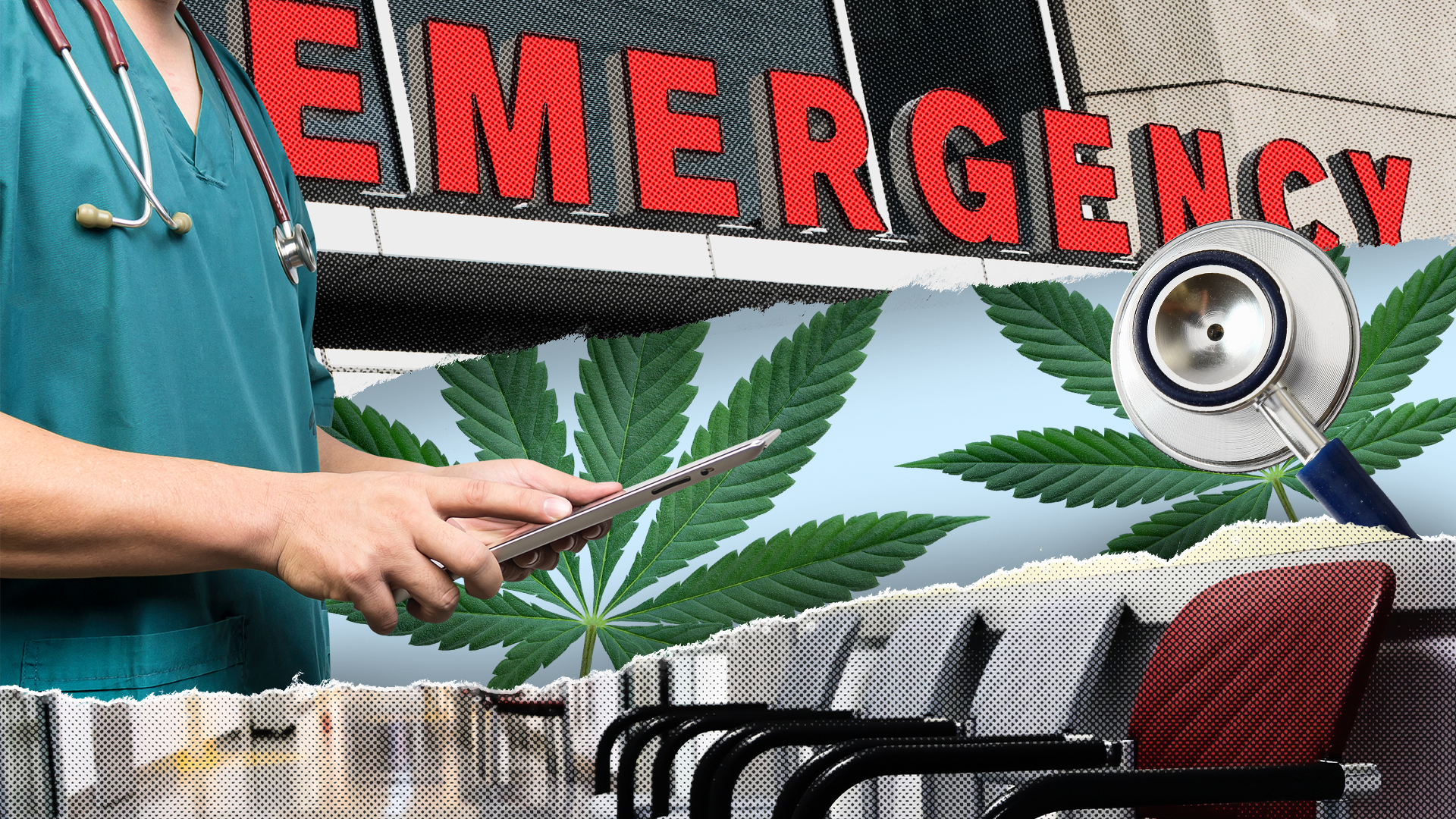 It’s been 21 years since the first iteration of Canada’s medical cannabis program was introduced, and yet, the fact that cannabis is medicine for over 300,000 Canadians is something doctors seem ill-equipped to handle, particularly for patients requiring urgent care.

Imagine heading to the emergency room with serious medical concern, and having it dismissed by hospital staff after disclosing that you use medical cannabis. Emergency room staff aren’t just ill-equipped—they are biased.

This isn’t just a problem in Canada, either. In the news, there is usually a story or two about high people going to urgent care scromiting, kids getting into cannabis, or some salacious data about increased hospital visits since adult-use legalization.

Regular cannabis consumers and medical marijuana patients have concerns about whether to disclose their use when visiting the emergency room. The fear is very real and often validated by dismissive healthcare professionals dismissing urgent health issues as symptoms of reefer madness.

The stigma in healthcare can range from biased to deadly

“I wonder if they would have treated me differently if I didn’t mention cannabis,” she told me a few days later.

In December 2021, I tweeted a short thread about two women who had similar experiences in the emergency room. Cindy,* who lives in Vancouver and was suffering from intense chest pain, noticed a change in demeanour from her first responders immediately after disclosing her cannabis consumption.

The plant, which she uses to alleviate chronic pain, was scapegoated as the cause of her pain. After a few hours in the hospital, Cindy was sent home with anxiety medication and a pamphlet advising her to seek help for substance use disorder.

Another woman, Jessica,* said she had gone to a Toronto hospital for mental health concerns. Immediately after she disclosed that she had been using cannabis to help with her anxiety, the attitude of the hospital staff changed. She, too, was sent home with anxiety medication and told to cease her cannabis use.

Dozens of people responded to my tweets, some with their own experiences. A few described positive interactions with healthcare practitioners, but most spoke of being written off by first responders, nurses, and doctors after indicating that they used cannabis, regardless of whether or not their use was medical in nature.

Some people described being misdiagnosed with cannabis hyperemesis syndrome (CHS), sometimes repeatedly, and noted that not having their concerns properly investigated could have led to life-threatening outcomes.

“Never disclose cannabis use even in legal states,” tweeted @JosephYartins. “As soon as you do they immediately write off everything as drug-induced anxiety & give the absolute minimum standard of care [sic].”

A few weeks later, Leafly editor Ashley Keenan reached out to me with another story—not a first-hand experience, but of witnessing how emergency room staff treated her husband, Chris, when his heart stopped multiple times over the course of 28 hours.

Keenan, who has been open about her medical cannabis use and struggles with chronic illness on social media, told me in a Zoom interview that, in general, healthcare practitioners have been supportive of her use of cannabis as medicine—”unless they can use it to scapegoat a medical event,” she said.

“I’ve had experiences where, if I’m having a certain symptom and I disclose my cannabis use, all of a sudden, that’s what it must be caused by, and that is usually the end of the investigation,” said Keenan, who noted on Twitter that doctors misdiagnosed her with CHS on three separate occasions when she was actually suffering from painful gallbladder attacks.

Urgent care needs to differentiate between medical cannabis and adult use. But they don’t seem interested.

Earlier this year when Chris, who also uses cannabis with a physician’s authorization, lost consciousness twice in the span of just a few hours, it was Keenan who tried to convince him that she ought to call 9-1-1.

“I was walking in the kitchen, and I fell down in front of Ashley and cracked my head,” Chris told me in a separate telephone interview. “That kind of terrified her, and she tried to get me to go to the hospital, but I said I was fine. Then it happened again the next night, and she called an ambulance.”

“They weren’t negligent by any means, they were straight up biased.”

The first responders weren’t too concerned about cannabis at the time, one of them noting it was ‘the government stuff’. Upon arriving at the hospital, the first line of investigation was into Chris’s cannabis use. While hooked up to a monitor, his heart stopped again.

“I truly believe if he had not had another heart event while hooked up to the monitor, they would have sent him home with [a diagnosis of] panic attacks or cannabis-induced paranoia,” said Keenan, who expected the line of questioning from the hospital staff. “That’s when they took him to the cardiac unit and started taking things seriously.”

Chris’s heart would pause and restart 8 – 10 seconds later at least once more while hooked up to monitors, but after a series of tests including an ultrasound, an MRI, and blood tests, a Cardiac Care Unit doctor told him that his heart issues were “cannabis-induced.”

While staff said his blood tests and ultrasounds looked good, Chris was concerned that the doctor he was dealing with may not have been fully educated about cannabis, and that their bias towards cannabis was interfering with his diagnosis. They offered no explanation on how cannabis could stop a heart.

“There was a part of me that was a little worried… like, ‘really, that’s it?’ Was there something coming around the corner I didn’t know about?’” he had wondered about his health. “[I felt] totally dismissed.”

Keenan pointed out that when she asked how the hospital handled patients who use cannabis for medical purposes, a nurse told her that they “didn’t really distinguish [between medical or recreational use].”

“I’m not saying they were negligent, because they certainly weren’t,” she said. “They were biased.”

She was close by when Chris was being discharged and asked why hospital staff had ceased investigation into what had caused his heart issue. She recalled the nurse’s response: “’ If you’re a hammer, and all you see is nails all day, you really start to know what a nail looks like.’

His discharge papers read ‘discontinue all cannabis use’ without considering the health consequences of stopping a form of medical treatment. It wasn’t until Chris was able to connect with his cannabinoid doctor that he even understood how cannabis factored into what happened to him.

Dr. Julie Holland, M.D., is a psychiatrist, psychopharmacologist, a former attending physician at the psychiatric emergency room at New York City’s Bellevue Hospital, and the author of The Pot Book: A Complete Guide to Cannabis.

The care medical cannabis patients receive (or fail to receive) from hospital staff stems from a profound lack of education, Dr. Holland explained in a phone interview.

“When I was a medical student, we were taught nothing about medical cannabis, about the endocannabinoid system, or even the fact that cannabis could be used medicinally,” she said. “A lot of people who are health care deliverers have never been adequately educated about how it is used.”

Adding to the issue of a lack of education, said Holland, are layers of shame, stigma, and a physician’s own projected self-hatred.

“Everybody in the world has a shadow side that they do or don’t deal with, including doctors, and it’s going to get triggered in the emergency room if you have an idea about people who use cannabis and other drugs,” said Holland.

“There is unfortunately always going to be a patient that a clinician is dismissive of,” she said, likening the treatment of medical cannabis users in the ER to that of women in the Victorian era who were often dismissed by male clinicians and diagnosed with hysteria.

“It’s discrimination, stigma, and lack of compassion, and it’s really dangerous. It’s an easy way out,” she added. By assuming that the issue is the patient’s fault, she said, physicians don’t have to do the work to figure out what the underlying cause is. In the ER, this attitude can be especially pervasive, “because it’s all about high turnover, just like a restaurant.”

While more cannabis education is absolutely needed, Holland said the priority for healthcare practitioners should be bias training, so they can learn about how their unconscious biases affect the patients that they treat.

“People who end up in the ER often get judged because doctors assume they are not taking perfect care of themselves, and that’s not fair, especially for cannabis users who are choosing a less toxic alternative, and something that is potentially medicinally beneficial.”

Holland, who lives and works in the United States, was surprised to learn that after so many years, Canadian healthcare practitioners are still (mostly) unfamiliar with the concept of cannabis as medicine.

“The more that everybody gets used to cannabis being a medicine, and the more we know somebody who is using it and benefitting from it, the less we’re going to be judgemental,” she said. “You would hope that we would be further along in this process by now.”

As she put it, “if there’s been a medical program in place for 20 years, they have no excuse. They have to know.”

When in doubt, talk to a cannabinoid specialist after urgent care

For Keenan, who works in the cannabis space with the goal of increasing public cannabis education and reducing stigma, the biggest takeaway from Chris’s experience in the ER is that many doctors don’t seem to know or care about the difference between medical and recreational cannabis use.

And their bias is impacting the quality of care in emergency rooms across North America.

Since then, she and Chris have sought out medical advice from physicians who are more familiar with cannabis and contributing factors to his cardiac events. Chris’s health has improved, and he has continued to use cannabis as directed by his general practitioner, without any adverse events.

“I often forget how stigmatized cannabis still is,” Keenan said. “This experience was hopeless and rage-inducing. It really lit a fire [in me] that we have so much work to do.”

*For privacy reasons, names have been changed at the subject’s request.

Leafly Investigation: Which celeb was smoking weed at the US Open?