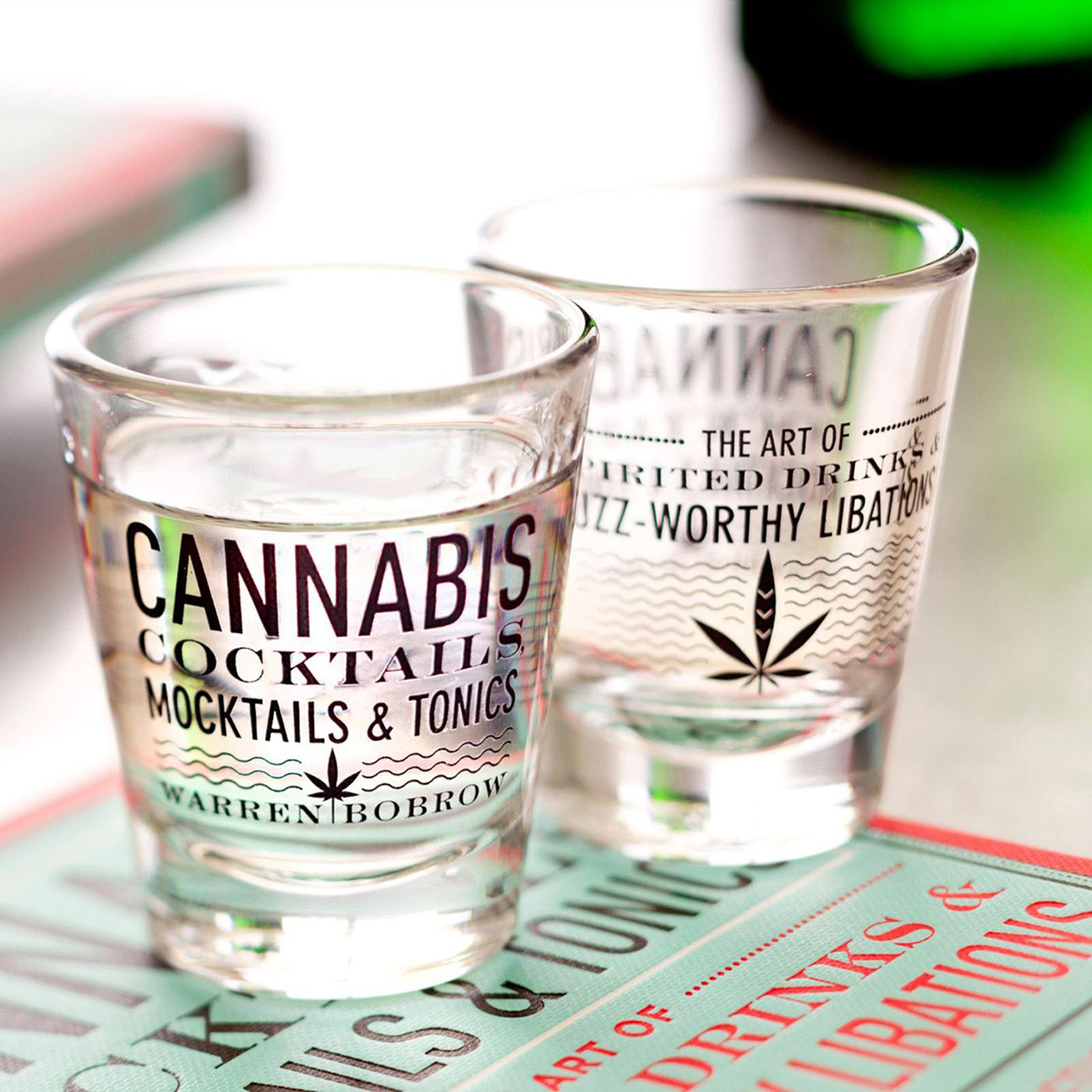 You can fact check that statement by watching him co-star in 101 Places to Party Before You Die on TruTV, including an episode in Portland devoted entirely to the city’s thriving cannabis scene.

“The second you can separate alcohol from the idea of ‘partying’ or even ‘going out,’ you’ve opened yourself up to a new way of life.”

He also hosts the popular podcast High and Mighty, which as the name implies frequently involves getting stoned on the mics with fellow comedy nerds.

So when he decided to take a break from drinking, he had a secret weapon already in the arsenal.

“Over the pandemic, I found that alcohol was making me feel a little depressed,” Gabrus explains. “If you’re not happy if you’re not drinking, that’s a bad headspace to be in.”

He’d heard about the whole California Sober trend (no to alcohol, yes to weed), and even knew a couple of people who’d successfully made the switch. So he figured, “Why not give it a try?”

For the first two weeks that meant simply smoking a joint while sipping a seltzer water. He felt better during the day, slept better at night, and woke up feeling fresh.

“But I missed cocktail energy,” he says. “Having a drink as a signifier for when the day is over and you can be done with work. Ah, now I can crack a beer.”

Which is when he discovered weed drinks.

At first he tried making his own, by adding cannabis tincture directly to a glass of iced-tea, with less than stellar results. Then he started visiting dispensaries and exploring store-bought weed drinks.

His first revelation—a can of Lagunitas HiFi Hops really scratches the beer itch. Which makes sense, given that its made by a legendarily weed-friendly brewery.

From that first Hifi, Gabrus says he tried pretty much every form of liquid THC currently on the market. A former bartender, the quest even led him to develop his own at-home cannabis mocktail recipes using products like Old Fashioned Lemonade Cannabis Quencher and S*Shots mixed with soda water, fresh fruit, and a mint garnish.

When lockdown ended, he resumed drinking alcohol socially, but not nearly as prodigiously. These days, he’s more likely to bring weed drinks with him to a house party, or to order something non-alcoholic at a bar and stealthily spike his own drink with cannabinoids. He says making the shift was all about changing his perception.

“The second you can separate alcohol from the idea of ‘partying’ or even ‘going out,’ you’ve opened yourself up to a new way of life.”

If you believe that you may have a serious addiction or dependency issue when it comes to alcohol, please consider seeking professional help.

For the rest of us, there’s many good reasons to consider limiting the amount of alcohol we consume, or eliminating alcohol entirely. A recent study showed that even moderate consumption of alcohol can damage the body, and the record is more than clear when it comes to the dangers of heavy or binge drinking.

What makes California sober such an attractive alternative is that you can replace alcohol with a far less harmful intoxicant. One with no calories and no hangovers.

Journalist and professional-partier Michelle Lhooq coined the phrase in 2019, and ever since it’s taken on a life of its own. She tells Leafly that her favorite weed drinks are made by Wunder, and she also loves Artet, Klaus and House of Saka.

Her best advice for experimenting with going California Sober?

“Have a Cali Sober buddy or crew to check in with and to share your journey. Solidarity and support is really crucial.”

If you don’t have someone IRL who wants to make the leap with you, check out the online support group she set up on Discord.

Is drinking the future of cannabis?

I decided to explore going California Sober by taking part in Sober September. Which also seemed like a good opportunity to immerse myself in the brave new world of weed drinks.

As a journalist who’s been writing about cannabis for the last twenty years, it’s been fascinating to watch this new market segment rapidly grow as the legal cannabis market matures.

According to a recent market study by Global Industry Analysts, the cannabis beverage market will be worth $2 billion by 2026. There’s already branded weed drinks from Pabst, St. Ides, and other established hooch brands.  Though I’ve got to say all of my favorite weed drinks are from weed companies that got into drinks, while many of my least favorites are from alcohol companies that got into weed.

How it started… How it’s going

As of this writing, I’m one week into this experiment, and can report that I’m feeling quite good and haven’t missed alcohol too much aside from some serious FOMO when everyone else at my table shared a nice bottle of red wine at a favorite Italian restaurant.

Meanwhile, weed drinking is pretty fun. On Labor Day I threw a little cannabis cocktail party, inviting friends to sample a wide range of weed drinks and also a few alcohol-free weed cocktails whipped up special for the occasion.

Just as some people drink rum and other wine, my guests all had their favorites, but a few got universally high praise: MXXN (a take on Tequila), Mad Lilly Passion Fruit Mango Spritzer, and the cannabis-infused teas from Kikoko.

My personal favorite dispensary-bought weed drinks (so far) are the Mexican sodas (Guava, Tamarind, Mandarin Orange) from Mari Y Juana, the blood orange-cardamom drink from Cann, and the Mezzrole—a cannabis mocktail in a can that’s named in honor of jazz clarinetist / reefer dealer Milton “Mezz” Mezzrow.

Made by a company called Klaus, the Mezzrole is ginger, lime, and rice vinegar blended with 10 milligrams of a “terpene-forward” THC emulsion. The brainchild of master mixologist Warren Bobrow, Klaus’s drinks come closest to the taste of a well-crafted cocktail with notes that are sweet, citric and spicy.

Once known as “the cocktail whisperer,” Bobrow published six books on mixology, wrote about cocktails for major media, worked directly with liquor brands, and taught classes and seminars.

Then in 2018 he quit drinking distilled spirits and went Cali Sober.

“The experience has been eye opening,” he tells Leafly. “Not only did I lose a significant amount of weight from all the sugar I was not drinking, but my general appearance has improved. And I haven’t had a hangover in almost five years!”

Bobrow: ‘Haven’t had a hangover in almost five years!’

Not that everyone’s a fan.

“I no longer go to alcohol industry events, nor do I go to bars. And I don’t miss it,” Bobrow says. He found himself ostracized by “my supposed friends,” he says, for choosing cannabis over alcohol cocktails.

A weed wine with dinner

Jamie Evans—known as the Herb Somm—is a certified sommelier who has managed to remain active in the traditional wine world while also launching her own line of alcohol-free cannabis wines.

“I’m not California Sober, but I have many friends who’ve chosen this path for health and wellness reasons,” she says. “With the introduction of cannabis beverages, we can now enjoy an alternative to alcohol at social gatherings without feeling pressured to imbibe.”

That’s an important benefit, and one of the reasons I think weed drinks have a big future. As a thought experiment, imagine going to a family BBQ—even in a legal state—and firing up a joint. Versus discreetly sipping on some weed wine.

As for Jamie’s product—wine ranks among the toughest traditional drinks to recreate, partly because de-alcoholizing wine strips out some of its flavor and essence, and partly because you’ve still got to figure out a way to get THC emulsified into the wine. Two sizable challenges at the same time.

I’m no expert, but I’ve been sampling (and writing about) cannabis wines since 2014. And the next time I go out for Italian food, I’m definitely bringing a bottle of her Herbacée Sparkling Rosier for the table.

Interview with a cannabis chef: Monica Lo and her fresh cannabis chimichurri recipe