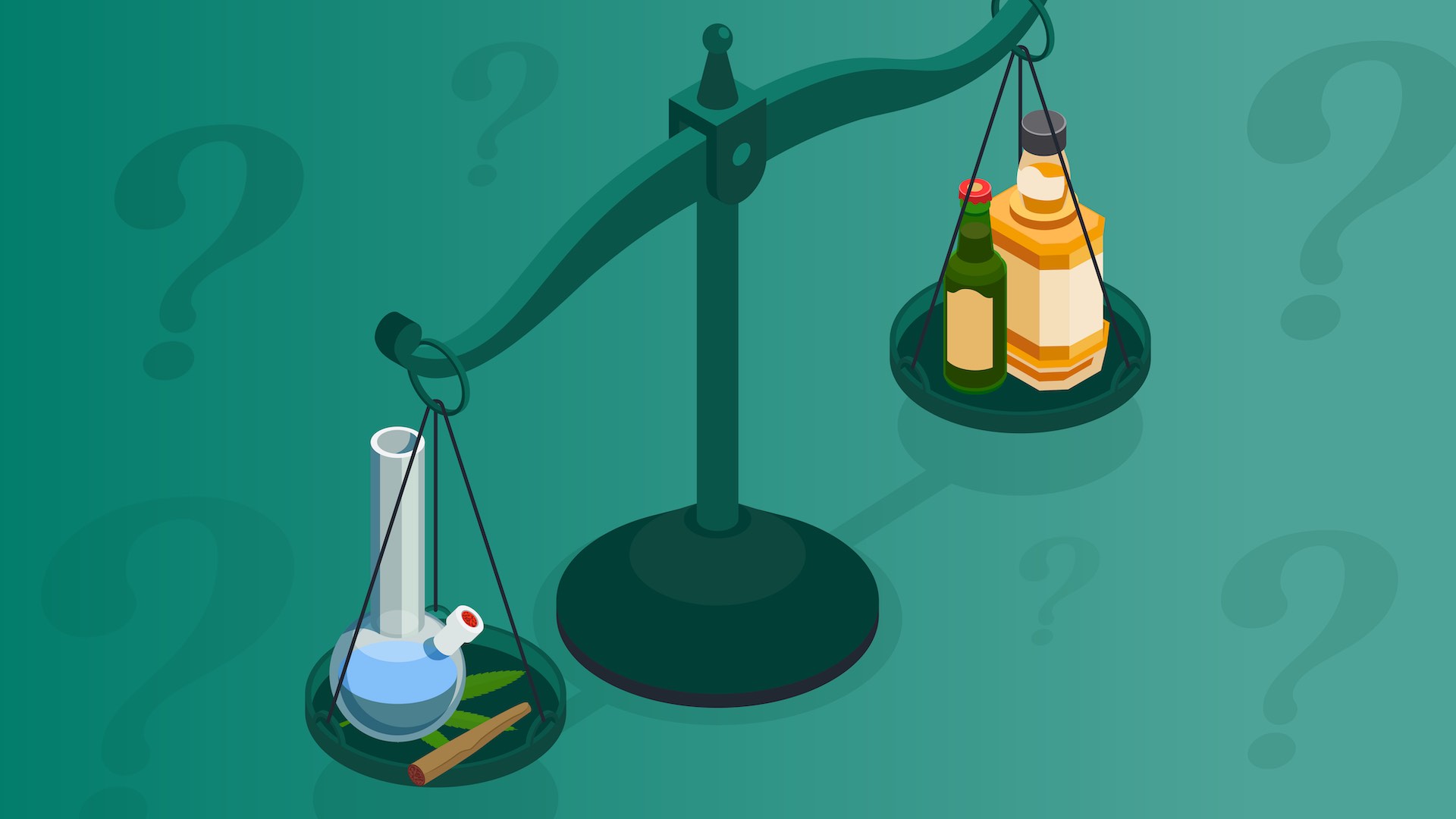 There’s a common perception that cannabis is safer and less addictive than alcohol. For example, in a recent survey of more than 1,000 Americans, respondents ranked alcohol as “somewhat and moderately addictive” compared to “not very or somewhat addictive” for marijuana.

But aside from general opinions, is there evidence that one substance is more addictive or harmful than the other?

What are the similarities between weed and alcohol?

Alcohol and cannabis share a bunch of features in common. Both can be used to help people mellow out, calm nerves, and relax muscles. These effects occur because both alcohol and weed belong to the depressant class of drugs (though weed falls into several other drug categories too).

Depressants increase the activity of GABA neurotransmitters in the brain. When GABA activity ramps up, activity in the central nervous system slows down, and the speed at which messages are passed between the body and brain also decreases. Imagine GABA as a brake pedal for the brain: When that brake is pressed, a calming effect ensues.

However, there’s such a thing as too much of a good thing. Too much depressant equals too much GABA activity, which in turn can result in drowsiness, slow reactions, poor coordination, and impaired concentration. Anyone who’s had a little too much weed or alcohol can likely attest to slurred speech, passing out early, maybe stumbling over, and the like.

How are weed and alcohol different?

Cannabis differs from alcohol in several critical ways for Dr. Jordan Tishler, President of the Association of Cannabinoid Specialists, and CEO/CMO at inhaleMD.

“Alcohol is a very simple, single molecule that is a product of yeast fermentation,” said Tishler.  “Essentially, it’s yeast poop. Poop is generally a poison and humans have figured out that in small doses they like the effect this poison has on their brain. It really isn’t that good for you and has no medical use at present.”

Cannabis, on the other hand, is a plant that contains hundreds of diverse compounds, many of which are therapeutically beneficial.

“We have just scratched the surface of knowing what they are and what these compounds do,” explained Tishler. “However, it is well proven that THC, and cannabis in general, have use in the treatment of pain, anxiety, insomnia, nausea and vomiting, and other illnesses.”

In simple terms, cannabis has medicinal applications, and alcohol does not.

Tishler emphasizes that understanding addiction is nuanced, and it can be helpful to distinguish addiction from dependence.

“Addictive is a complicated word,” said Tishler. “Addiction is a set of maladaptive behaviors, whereas dependence is a physiological condition leading to withdrawal and often continued use of a substance.”

Tishler believes that dependence on cannabis is far more common than addiction, which is formally diagnosed as cannabis use disorder. “Cannabis can lead to a dependence rate of about 7%—less than half the alcohol rate—and an addiction rate that is very low but undefined,” explained Tishler.

Research tells us that THC appears to be responsible for cannabis’ addictive potential due to its effects on the brain’s dopamine system. Dopamine is a neurotransmitter produced by the brain that influences the experience of pleasure and rewards.

THC increases dopamine release, and when dopamine is released, the resulting feelings of pleasure can reinforce the potentially addictive effects of the cannabinoid. Long-term heavy cannabis use, however, can blunt the body’s dopamine system. If your dopamine levels stay elevated for too long—due to constant cannabis use, for example—the dopamine system becomes dysfunctional.

The reward circuitry in the brain can become impaired, and it’s more difficult to derive pleasure from things you would normally enjoy, such as delicious food, a sense of achievement, or physical touch. This lack of enjoyment can lead to even more chronic use to seek the high that once came so easily.

CBD, on the other hand, doesn’t appear to be addictive. Instead, there’s evidence that this non-intoxicating cannabinoid may be able to treat addiction. A 2015 study, for example, found that CBD may be beneficial in treating opioid, cocaine, tobacco, and even cannabis addiction.

It’s important to remember that the “addictiveness” of cannabis is more than a chemical reaction in the brain—social and environmental factors also play a part. For example, certain populations appear more likely to become addicted to weed than others, potentially teenagers, and those with another substance use disorder, or a mood or mental disorder, such as schizophrenia.

Beyond this, other factors such as lifestyle, home and work environment, and socio-economic status may all additionally impact whether a person finds weed addictive or not.

How addictive is alcohol?

Similar to cannabis, dependence on alcohol is more common than addiction, according to Tishler.

“With alcohol we see both addiction and dependence. The dependence rate is about 15%, and the addiction rate is significantly lower,” he said. “In higher doses, alcohol can be addictive, and has harmful effects on the brain, heart, liver, blood, and bone marrow.”

Recent studies similarly point to the different ways in which individuals can develop an unhealthy relationship with alcohol. For example, about 29.7% of men and 22.2% percent of women aged 18 and over engaged in binge drinking in 2019. While binge drinking isn’t the same as alcohol addiction, it represents a form of misuse that contributes to the risk of developing alcohol use disorder.

These statistics certainly suggest that alcohol is more addictive, or prone to misuse than cannabis, but why?

While there’s no clear cut answer, there are several contributing factors worth exploring. Like cannabis, alcohol also stimulates dopamine release. However, alcohol has another neurochemical avenue through which it can create addiction—endorphins.

In a 2012 study, researchers at the University of California found that alcohol triggers the release of endorphins in two areas of the brain that are associated with reward processing. Endorphins are naturally-occurring opioids produced by the body that alleviate pain, help you to feel good, and give you a buzz. The study also discovered that heavy drinkers experienced a higher release of these feel-good chemicals, thus further reinforcing alcohol’s addictive properties.

Similar to cannabis, a number of variables means some individuals may be more likely to become addicted to alcohol than others. Factors such as genetics, a family history of alcoholism, mental health disorders such as depression or bipolar disorder, and traumatic experiences elevate the likelihood of developing an addiction.

So which is more addictive?

Some have speculated that alcohol may be more addictive than cannabis because, quite simply, it’s more widely legal and readily available. Recent research suggests that increasing cannabis legalization has been linked to rising rates of dependence.

Several other studies have compared cannabis and alcohol, providing us with useful insights into how they stack up against each other in terms of safety and other measures.

One groundbreaking 2015 study compared the risk of overdose associated with different addictive substances. Alcohol consumption fell into the high-risk category, while cannabis, on the other hand, was the only substance to qualify as low risk. In other words, it’s impossible to die from a cannabis overdose, but comparatively easier to die from alcohol poisoning.

There’s evidence that cannabis is safer than alcohol with respect to a number of other health-related harms too. A New Zealand Medical Journal study compared THC and alcohol in terms of 13 commonly discussed issues related to substance use and health.

THC was found to have less risk than alcohol for these nine issues:

For three other factors, cannabis and alcohol shared similar risks:

There was only one issue where cannabis came out worse than alcohol: The plant is more likely to trigger anxiety during intoxication.

The degree to which weed or alcohol is addictive–or harmful–cannot be reduced to a single factor. While there’s evidence that weed is comparatively less addictive and less harmful than alcohol, that doesn’t mean it can be used recklessly.

Tishler believes a better question is not which substance is more addictive, but how we use them.

“It’s important to remember that the risk associated with either substance is tied to how much you use—less is safer,” he said. “While most people have a handle on how much is too much alcohol, many cannabis users use far too much, often without even realizing how much they’re taking and what a safe range would be.”

Tishler points out that tolerance is often touted as a badge of honor in cannabis circles. In reality, however, tolerance can lead to dependence and possibly addiction, so it may be beneficial to avoid developing a significant tolerance to cannabis.

Diverse factors, such as age, mental health, and personal circumstances, also interlock together to influence the relationship we develop with these two substances. It’s vital to be aware of the risk factors that can inflate the likelihood of addiction or harm occurring for you, and take precautions to prevent unwanted outcomes.