Can memory loss be good? How cannabis can help with PTSD | Turn 420 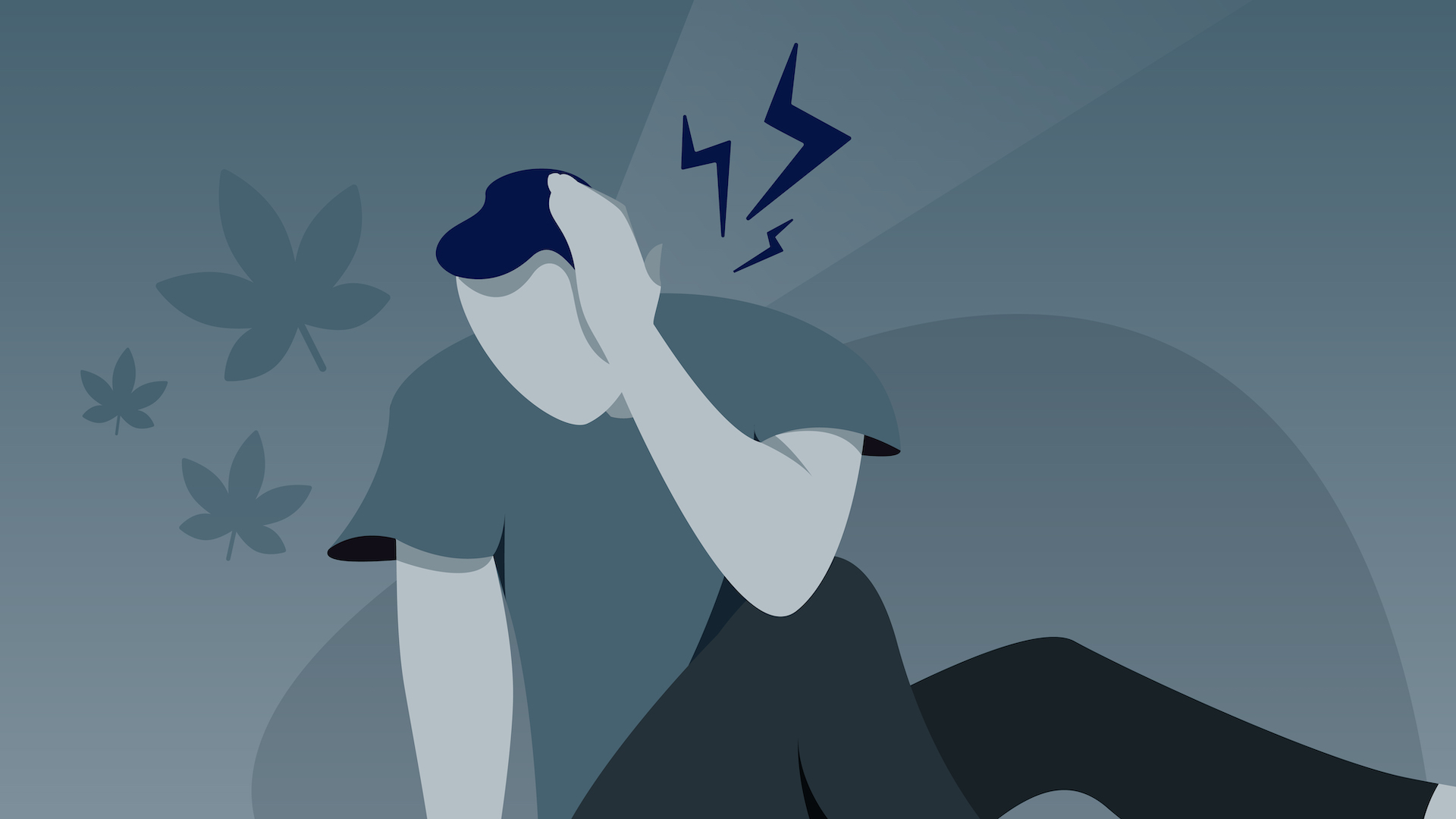 For Scott Thompson, a San Diego artist and filmmaker, the simple act of opening a car door used to trigger an avalanche of overwhelming emotions. Thompson was involved in a car accident that caused a severe concussion and traumatic brain injury. Driving a car or even being a passenger set off crippling anxiety, panic attacks, and flashbacks.

“Every time I drove in a car, I relived my accident and adrenaline would flood my body triggering a pretty intense flight or fight response,” said Thompson. “I would get pretty bad tunnel vision during these episodes, and would enter an intense panic state where I felt like I was going to die. Even in the passenger seat I’d freak out.”

Thompson was diagnosed with post-traumatic stress disorder (PTSD) and prescribed Sertraline, an antidepressant that gave him headaches and nightmares. So he turned to cannabis.

“I used cannabis earlier in high school but never really used it as an adult,” reflected Thompson. “After my accident, I started using a vape pen and smoking flower to help calm my nerves. Cannabis helped me relax and it definitely helped my PTSD symptoms.”

Thompson used cannabis consistently for a year and is now largely free of PTSD symptoms. “Cannabis seemed to work really well with my body, helping my mind get back to health,” he said.

Stories like Thompson’s attest to the healing potential of cannabis for PTSD symptoms. PTSD is one of the most common conditions that people use cannabis to treat. A majority of US states with medical marijuana programs specifically list PTSD as a condition eligible for medical cannabis. Research also indicates that cannabis can be a helpful treatment for trauma.

What is it about weed that makes it well-suited for treating PTSD?

A majority of people (approximately 55%) experience trauma at some point in life. Trauma can include physical accidents or assault, involvement in combat or disasters, or witnessing the death or injury of others, and events such as sexual assault or abuse. It’s normal to experience short-term symptoms of stress and anxiety after a shock. However, with time, we can recover and heal from the effects of the trauma.

For some, however, the effects of the event linger longer, leading to ongoing or chronic PTSD. About 6% of people experience PTSD at some point during their lifetime. PTSD can affect anyone, although certain risk factors mean that some people are more likely to develop PTSD than others, for example, women more than men.

Other factors that lead to PTSD include having little to no social support after a traumatic event, or dealing with extra stress such as the loss of a loved one, job, or home in addition to the trauma.

People diagnosed with PTSD can experience diverse symptoms. For doctors to make a diagnosis, however, specific symptoms must be present for at least a month and severe enough to interfere with relationships, work, or everyday life.

How can cannabis help with PTSD?

One well-known “side effect” that often accompanies cannabis use is memory loss. Ironically, this can actually be helpful for people with PTSD.

“The months and years of enduring with, and fighting against, memories of traumatic experiences can be scarring,” said Dr. Benjamin Caplan MD, Chief Medical Officer at CED Clinic and EO Care. “Those who suffer from the unremitting memory of violent crimes, or those who can’t free themselves from memories of wartime experiences, are also fighting with their own memory many years later.”

Caplan has found that cannabis, paired with a supporting set and setting, can be more effective and better tolerated than some traditional PTSD therapies, such as SSRIs (selective serotonin reuptake inhibitors). He believes that cannabis is uniquely suited to treating the intrusive thoughts, negative emotions, and the aversive memory aspect of PTSD.

“For battles with never-ending nightmares, the impact of THC-derived cannabinoids on short-term memory offers a welcome mini-vacation,” he explained. “By combining a brief escape of short-term memory with the lightly euphoric effects of cannabinoids, even the most gripping PTSD has the potential to be subdued.”

Such observations resonate with Jason Gann, creator and star of stoner comedy series Wilfred. Gann has lived with PTSD for more than 30 years after experiencing physical and psychological trauma as a child. He first turned to cannabis as a teen to escape intrusive thoughts stemming from feelings of shame, anger, and worthlessness.

“Cannabis helps me to manage anxiety attacks, insomnia, and those intrusive thoughts,” reflected Gann when he spoke to Leafly. “My relationship with cannabis helps me reach an elevated state of consciousness. It’s like I’m still in my head, but I’m also looking at my life from the outside, allowing me to separate myself from intrusive thoughts that can be overwhelming.”

In the past, Gann tried antidepressants to treat his PTSD symptoms but found them unhelpful.

“I have tried a few different brands of antidepressants over the years, but they only complicated my life further,” said Gann. “They also fade in effectiveness over time, so you just have to take more and more to feel their effects. Antidepressants may have helped stop me from taking my own life in the short term, so I do believe there is a place for them in some extreme circumstances, but they created many more problems later.”

Gann views cannabis as an exit drug that helped untether him from antidepressants, which were fostering addiction and destructive thoughts.

What does the science say on cannabis and PTSD?

Both Caplan and Gann’s observations are supported by data that cannabis can help suppress traumatic memories and reduce anxiety. Other research on veterans with PTSD also suggests that cannabis use can decrease the frequency of nightmares.

Additionally, a 2022 study found that individuals with PTSD who used cannabis for a year were 2.5+ times more likely to no longer meet criteria for a PTSD diagnosis than those who did not use cannabis.

Other recent research offers a helpful explanation of why cannabis is uniquely suited to treating PTSD. The study, which included 71 adult participants, found that THC reduced amygdala activity in individuals with PTSD, the part of the brain that helps generate and process fear so the body can respond to threats. Those with PTSD often experience hyperactivity of the amygdala, which leads to hypervigilance and hyperarousal—in other words, feeling on edge.

In the study, not only did THC help diminish the amygdala’s activation, it also increased activity in other parts of the brain—the medial prefrontal cortex and rostral anterior cingulate cortex. These regions play a vital role in processing emotions, monitoring conflict and regulating attention control. Individuals with PTSD often experience attentional control abnormalities, such as an impaired ability to focus on tasks, or intrusive memories or flashbacks.

In simple terms, THC appears to beneficially influence how individuals with PTSD respond to threats, emotional stress, and attention control.

However, THC-rich cultivars of weed or high doses can also lead to dependence, cannabis use disorder, or unwanted cognitive effects such as further anxiety.

For example, approximately 22.7% of veterans who use cannabis for PTSD may have cannabis use disorder. Most high-quality research on cannabis and PTSD also stresses that further clinical research is needed to draw definitive conclusions about the efficacy and safety of the plant.

Are certain cannabinoids or delivery methods more beneficial for PTSD?

Both Thompson and Gann favor whole-plant cannabis with a mix of cannabinoids, terpenes, and other compounds for managing their PTSD symptoms.

“I prefer to use flower, however, I have two kids and don’t like to smoke in front of them, so vaping is a nice discreet way to ingest,” reflected Thompson. Gann prefers to smoke, favoring joints or a pipe. Smoking and vaping are among the most rapid ways to enjoy the therapeutic effects of cannabis.

However, there are a range of delivery methods that cater to different needs: Not everyone is seeking a quick fix. “Cannabis offers choices of timing that are similar to options among traditional pharmaceuticals for quick-acting and extended-release choices,” commented Caplan. While smoking can be a quick-acting choice, edibles, which typically take 30-60 minutes to kick in, are an extended-release option.

When it comes to the effects of specific cannabinoids on PTSD, there is a smorgasbord of findings. CBD, for example, appears to be well-suited to managing anxiety, extinguishing fearful memories, and overcoming the desire to avoid certain tasks or activities. THC seems to play a role in softening aversive memories but also boasts other benefits such as easing nightmares and supporting sleep, as discussed earlier.

Caplan, however, cautions against rushing to make over-simplistic conclusions about specific cannabinoids or delivery methods for PTSD.

“The familiar model of having one medication singularly focused on addressing a certain nerve receptor pathway is not the paradigm to understand how cannabis works,” explained Caplan.

For some, the experience of euphoria associated with THC may offer welcome temporary relief from ever-present tension and stress associated with reliving enduring trauma, while for others, the non-psychoactive effects of CBD may be preferable.

Caplan encourages individuals with PTSD who are considering using cannabis as a form of treatment to speak with an experienced cannabis clinician. Rather than adopting a one-size-fits-all approach, he recommends a treatment plan that caters to the individual.

“Anyone experiencing PTSD should speak with a knowledgeable cannabis clinician about specific choices that can address their unique symptoms and preferences,” said Caplan. “For millions of sufferers, the pain, anxiety, and recurring memories can be well-managed with the many safe choices available in the cannabis medicine cabinet.”