Adaptogenic mushrooms: Not quite magic, but they’ll give your morning coffee a lift | Turn 420 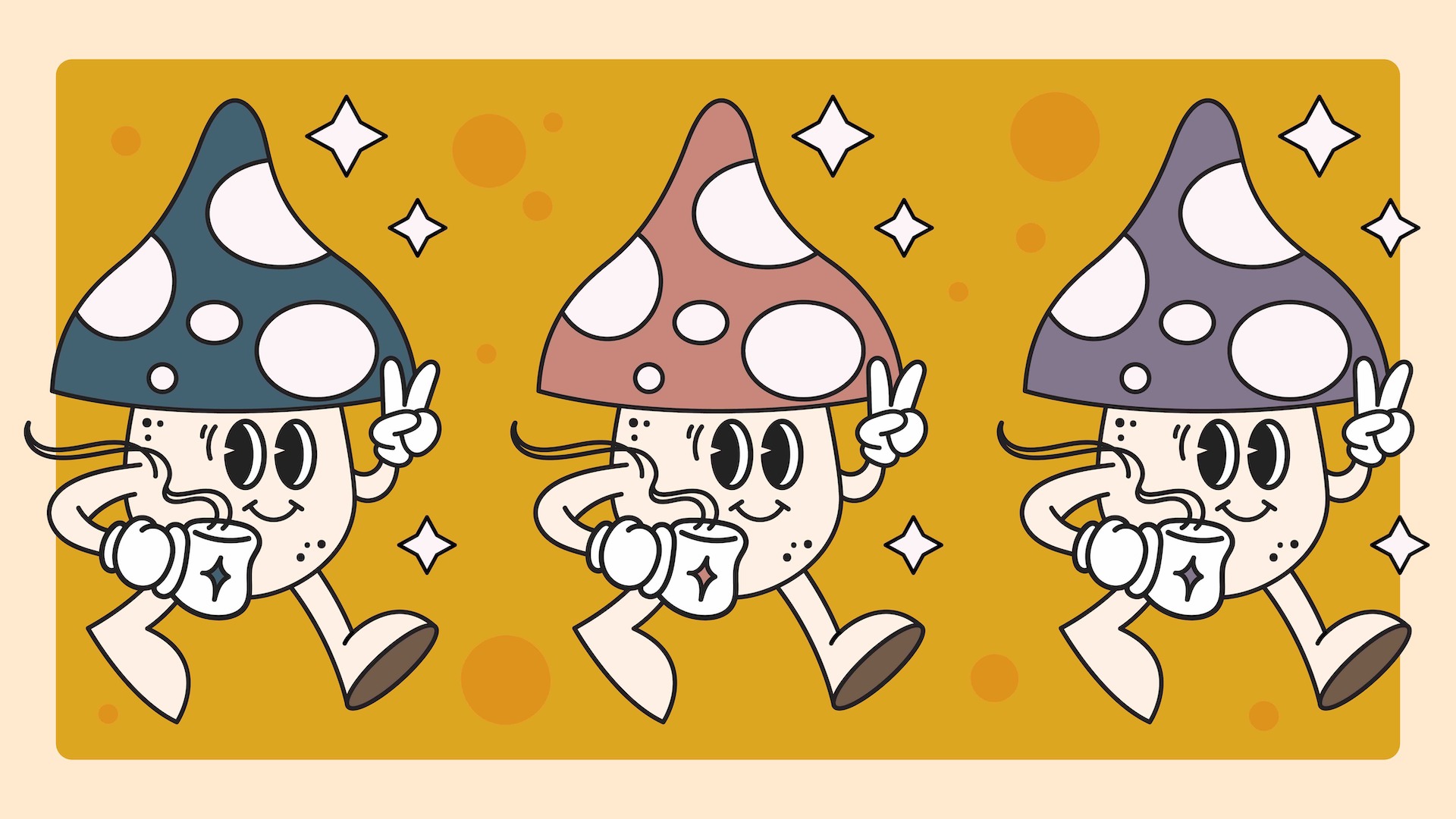 I come from a family of coffee purists. High-quality, single-origin Arabica beans brewed hot with a bit of cow’s milk—or bust. In fact, my dad pinpoints the exact moment he fell for my mom to finding two dozen bags of Peet’s dark roast coffee sardined in her freezer, then watching her brew up a steaming, unadulterated cup.

Adaptogenic mushrooms don’t contain psilocybin. Rather, they contain a high density of bioactive compounds that may help your body cope with stress and return to homeostasis.

As a devotee of well-balanced medium roasts, I’ve been known to hoard the best beans from local cafés in my kitchen cabinet, above an overflowing collection of Far Side mugs.

But the new favorite I’ve recently added to the shelf just might knock me off my high horse. It’s a medium-roast Arabica adaptogenic mushroom coffee called Hocus Pocus, from a new Seattle café and online mushroom coffee and tea purveyor called Wunderground.

‘Brain wash’ in every cup

Dedicated to the trendy medicinal mushroom movement, Wunderground Café offers an array of enticing drinks in a welcoming and sleek space, punctuated with whimsical woodland decor. Their menu offers the normal litany of espresso and tea drinks, but they’re all infused with 1,000 mg of Wunderground’s trademarked adaptogenic mushroom blend called “Brain Wash.”

Over a few visits to the cafe this summer, I tried a selection of drinks—including the Hocus Pocus drip coffee I decided to take home, an oat milk latte, and an iced matcha latte—to see if these shroomy, wellness-hacked drinks satisfied my coffee tastes and delivered on their “magical” benefits.

Also known as medicinal or functional mushrooms, adaptogenic mushrooms are not magic mushrooms and do not contain psilocybin. Rather, they contain a high density of bioactive compounds or “adaptogens” that may help your body cope with stress and return to homeostasis.

Adaptogenic mushrooms are a trendy new product in the health industry, but the use of adaptogenic plants, herbs, and fungi as medicine goes back thousands of years and spans across many cultures.

Specifically grinding up functional fungi for your daily java? That goes back to Word War II-era Finland, when coffee rationing forced the Finnish people to use Chaga mushrooms, native to the area, as a coffee enhancement and substitute, according to a few online sources.

These days, perhaps inspired by the popularity of CBD-infused beverages, mushroom purveyors turn adaptogenic mushrooms into “beverage enhancements” by dehydrating the mushrooms, grinding them into a fine powder, and intermixing them in instant coffee, ground coffee, or tea.

This is the premise that birthed Wunderground, founded by noted entrepreneur and fungus fanatic Jody Hall.

Hall, founder of Seattle’s beloved Cupcake Royale bakeries and the pioneering cannabis edibles company The Goodship, had a desire to elevate coffee and tea beverages, and the experience around drinking them, with four specific adaptogenic mushrooms.

All of Wunderground’s coffee and tea drinks, as well as their online products, utilize Cordyceps, Chaga, Lion’s Mane, and Reishi mushrooms in different combinations. According to Wunderground’s website, their mushrooms are grown organically on natural wood substrate to mimic how they’re grown in the wild, and are tested for heavy metals, pesticides, and herbicides.

Cordyceps is a Wunderground favorite due to their potential anti-aging, anti-inflammatory, and performance enhancing qualities, and for centuries in traditional Chinese medicine practice, Cordyceps stems have been collected and dried for use in treating an array of health issues. Likewise, limited modern studies show that certain cordyceps species have the potential to affect “immunological, hepatic, renal, and cardiovascular systems” and to work “as an anti-cancer agent.”

Wunderground also uses chaga mushrooms, which have the surreal appearance of soaked wood. Chaga is used to boost energy, settle the stomach, and heighten immunity. Likewise, chaga is a natural medicine used in China, Russia, and Korea, particularly for one of its adaptogenic components, Inonotus obliquus, which may possess antitumor, antioxidant, anti-virus, hypoglycemic, and hypolipidemic activities, according to limited scientific research in humans.

Wunderground’s third component is Lion’s Mane, a shaggy, tan-colored fungus that’s been used in Chinese medicine for centuries as a booster for memory, focus, sleep, and happiness. Sure enough, some research supports the positive neurocognitive effects of Lion’s Mane, including its potential to alleviate depression.

Lastly, these drinks involve reishi mushrooms, a staple known as Linghzi in Chinese medicine, which, according to Wunderground, have “beta-glucans, a naturally occurring soluble fiber that slows down your digestion,” helps regulate blood sugar, calms nerves, and enhances sleep. With a look at the scientific literature, studies have found that the bioactive components in reishi mushrooms have the potential to boost the immune system and help with a laundry list of conditions including anorexia and cancer.

Both the iced oat milk latte and iced matcha green tea drinks I ordered included 1,000 mg of their trademarked Brain Wash, which is a potent combination of all four aforementioned fungi. Wunderground’s description promised a virtually undetectable fungi taste, combined with the benefit of make the consumer feel energized without “the crash or jitters” .

I found the oat milk latte to have a slightly earthy aftertaste and some minor graininess from the added mushroom powder, but overall, it was a very good espresso drink. The matcha latte I ordered on a subsequent visit was even better because the already-grainy texture and earthy taste of matcha green tea worked well to mask any added shroomy-ness.

After drinking the mushroom latte, I was surprised at the low acidity of the coffee and the lack of jitters. With the mushroom matcha, it was much the same—the tea went down easily and the drink didn’t immediately cause unwanted fatigue, jitters, or stomach upset. Both gave me energy as well, but it’s hard to know if that was just the caffeine talking, or if the mushrooms really “enhanced” my performance.

The Hocus Pocus was so drinkable, in fact, that I didn’t treat the power of functional fungi with respect.

This drip coffee was the real test to me because drip is stronger and can sometimes give me an upset stomach and, if the roast is too acidic, heartburn. But Hocus Pocus proved to be a good, robust medium roast coffee. I didn’t really taste the mushrooms and in the hot format I didn’t notice any powdery residue. More importantly, I felt calm and my stomach was settled after drinking it.

The Hocus Pocus was so drinkable, in fact, that I didn’t treat the power of functional fungi with respect, and during the visit where I ordered my iced mushroom matcha green tea latte, I also drank another half-cup of Hocus Pocus without a second thought. Driving home, I felt unexpectedly fatigued.

Research has shown that adaptogenic mushrooms like Lion’s mane, cordyceps, and reishi are generally well-tolerated by the body and safe for consumption by humans. But very little research has been done around the human ingestion of medicinal mushrooms, so there’s no standard recommended dose. Some people have reported negative side effects, like upset stomach, fatigue, and dizziness, from consuming mushrooms at high doses.

What constitutes a high dose? That depends on your own body chemistry and the type of mushroom you’re consuming. At 1,000mg each, Wunderground’s beverages use a conservative amount of adaptogenic mushrooms per drink, but I do think that consuming two potent adaptogenic mushroom drinks at a single sitting was too much for my system.

Not a miracle cure, but plenty tasty

Overall, it’s hard to know if Wunderground’s mushroom beverages really deliver on the subtle health benefits they promise, which include a boosted immune system, improved cognition, and better sleep. Those weren’t effects I necessarily noticed.

Still, aside from the minor fatigue experienced on the day I had two mushroom drinks, my experience with Wunderground’s beverages was positive. The drinks were tasty and I felt vital, energized, and happy after all three beverages, without the jitters and upset stomach I often get from traditional coffee.

So consider me a new mushroom coffee convert. Whether I can slip coffee with mushrooms in it, however tasty and beneficial, past my parents’ uncompromising coffee palates? I wouldn’t bet on it.

Interview with a cannabis chef: Monica Lo and her fresh cannabis chimichurri recipe