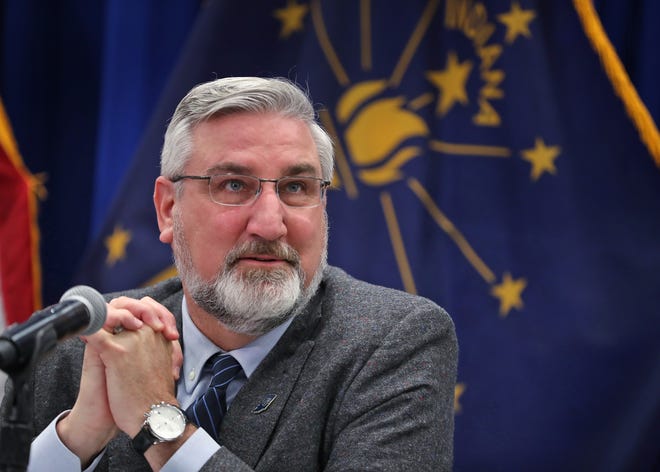 Biden announced Thursday that he is pardoning people with such federal convictions, a move that could help more than 6,500 people across the country. Because the vast majority of those convictions are at the state level, the announcement will have little impact on most people who have been charged.

Biden is encouraging governors, such as Holcomb, to follow his lead at the state level.

More:What to bring and how to vote in Indiana

“Too many lives have been upended because of our failed approach to marijuana,” Biden said in a video announcement. “It’s time that we right these wrongs.”

Marijuana a divisive topic in Indiana

It’s been a divisive subject. Already in Indianapolis, Democratic Prosecutor Ryan Mears announced in 2019 that he would no longer prosecute simple possession of marijuana, earning criticism from some Republicans at the Statehouse.

Historically, Holcomb has been opposed to the state legalization of marijuana because it is still a schedule 1 drug, the most dangerous classification, under federal law. That designation is reserved for drugs with no accepted medical use and with a high potential for abuse, on par with drugs such as heroin and LSD.

Biden has directed U.S. Secretary of Health and Human Services Xavier Becerra and Attorney General Merrick Garland to review how marijuana is classified. But without the change, Holcomb, who once admitted he smoked marijuana in college, is unlikely to budge on the issue.

Holcomb, who has the power to grant pardons and has done so before, did not immediately respond to IndyStar questions through a spokesperson about if he would pardon those convicted of simple possession of marijuana or if Biden’s announcement changed his stance on legalizing weed in Indiana.

“Gov. Holcomb is currently in Switzerland on an economic development trip,” said Holcomb’s press secretary, Erin Murphy. “If he releases something, I will make sure to send it your way.”

“Decriminalizing simple possession of marijuana is a game changer, because now Hoosiers with prior convictions will have access to a better quality of life — including new job opportunities and a brighter future for their families,” said Drew Anderson, spokesman for the Indiana Democratic Party. “Democrats urge Governor Eric Holcomb to set aside his politics and follow the President’s suit — like he’s previously promised.”

It’s worth noting: federal law has not actually changed yet.

In Indiana, only products with low THC and high cannabidiol are allowed. For years, advocates of legalizing marijuana have filed legislation with no success. In 2022, more than a dozen bills were filed on the subject, and none received even a committee hearing or vote. Meanwhile, 37 states, including most of Indiana’s neighbors, have legalized weed either recreationally or medicinally, according to the National Conference of State Legislatures.

In a sign of some hope for weed proponents, an Indiana legislative committee is studying the health benefits and potential decriminalization of THC products, including Delta 8 and Delta 9, and could make recommendations on potential legislation to pursue at the group’s next meeting on Oct. 20.

Call IndyStar Statehouse and political watchdog reporter Kaitlin Lange at 317-432-9270 or email her at kaitlin.lange@indystar.com. Follow her on Twitter: @kaitlin_lange.

Cos. Get Last Shot At Countersuit In Delta-8 Vape Fight – Law360