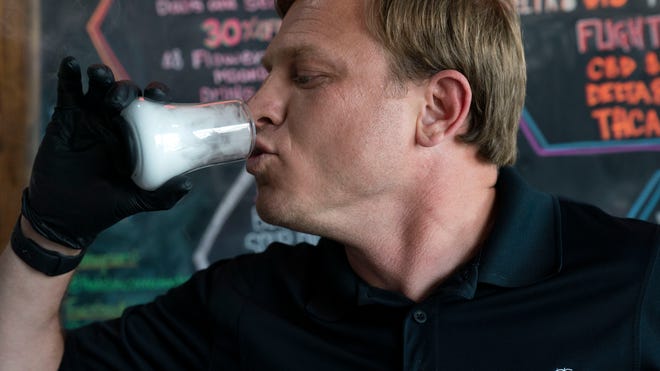 State lawmakers this year proposed, then backed away from a plan to outlaw cannabis businesses in Tennessee. After an outcry from business owners, lawmakers pitched a plan to regulate the cannabis business. That plan was also dropped, leaving Tennessee’s $180 million hemp industry in a state of legal limbo.

While it didn’t specifically address delta-8-THC, the 2018 U.S. Farm Bill effectively legalized it through a loophole that allowed the sale of hemp-derived delta-8-THC products in areas where recreational use of cannabis was prohibited, as well as where medicinal marijuana required medical authorization, according to a 2022 news release by the University at Buffalo. By late 2020, delta-8-THC exploded in popularity.

This has led to a boom in the sale of products containing cannabidiol, “Delta-8” Tetrahydrocannabinol and lower amounts of “Delta-9 THC,” which is more associated with traditional marijuana.

From the Knoxville News Sentinel:Knoxville has high demand for downtown ‘dab bar’ The Holistic Connection — THC, for short

Here’s what we know about Delta-8.

Delta-8 comes in the form of gummies, vape cartridges, tinctures and other products.

How are Delta-8 THC and CBD different?

According to an article by The Daily Advertiser, THC (Tetrahydrocannabinol) and CBD (Cannabidiol) are both chemicals known as cannabinoids found in the marijuana plant, according to U.S. Food and Drug Administration.

THC has psychoactive properties and can get a person high. THC is typically known as “weed” and is legal for recreational use in more than a dozen U.S. states.

CBD is derived from hemp plants, which are the same species as marijuana but contain virtually none of the psychoactive compounds that get people high. To be legal, CBD must contain less than 0.3 percent of THC, according to the FDA. Some broad-spectrum CBD products contain no THC.

CBD’s chemical compound doesn’t alter a person’s mental state and can be harvested from the same place as THC, but it is mostly taken from the hemp cannabis plant. CBD can help with sleep, anxiety and stress.

Does CBD get you high? What about Delta-8?

CBD, because of the very limited amount of THC it legally contains, cannot get a person high.

Legal CBD products can only have .3% THC. Comparably, marijuana seized by the U.S. Drug Enforcement Agency in 2018 averaged more than 15% THC.

OPINION:Colorado’s success as a state could be incentive for Tennessee to legalize medical marijuana

Side effects of CBD may include dry mouth, diarrhea, reduced appetite, drowsiness and fatigue, the Mayo Clinic reported.

The chemical can also interact with other medications. If you have a heart condition or take blood thinners, some doctors recommend staying away from CBD.

However, Delta-8 contains THC, which is that psychoactive substance that can get a person high.

What’s the difference between Delta-8 and Delta-9?

According to a news release from University at Buffalo, Delta-8 is a hemp-derived cousin of delta-9-THC. Researchers from the University at Buffalo and the University of Michigan have partnered with a Buffalo-based manufacturer of CBD products in an effort to learn more about the benefits and potential drawbacks of Delta-8-THC, and better inform lawmakers, public health officials, consumers and others.

The research team just published two papers based on their survey of more than 500 participants’ experiences with delta-8-THC and how it compared to cannabis. The words of one user best describe the overarching views shared by survey participants: that delta-8-THC is like delta-9’s “nicer younger sibling” because it provides all the benefits with fewer adverse reactions.

What does Delta-8 do to the body?

Here’s what they found:

However, everything comes with risk. The FDA warns that delta-8 may be harmful. Side effects could include:

Hemp-derived cannabis products, including those that can produce a high similar to traditional marijuana, are legal under federal law, thanks in large part to a 2018 Farm Bill broadly legalizing hemp production. According to CFAH.org, delta-8-THC is federally legal as long as it is extracted naturally from hemp.

However, these 12 states have banned delta-8:

Taylor Worsham is a Digital Producer for the USA Today Network.