The straight dope on delta-8 THC in Arkansas | Turn 420 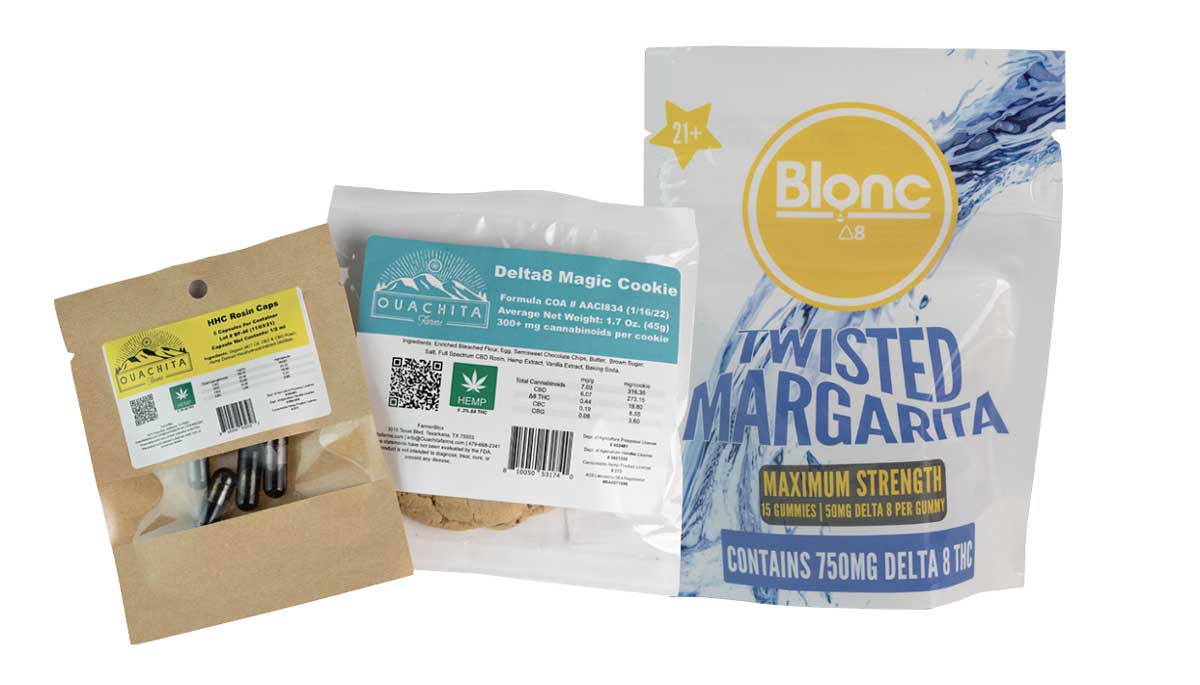 There is perhaps no industry more regulated in Arkansas than medical marijuana. State laws and rules restrict who can buy it, how much and what types of products qualified customers can buy, how and where it can be sold — even how it can be advertised. So you might be surprised to learn that a similar psychoactive product, also derived from the cannabis plant, is widely available in Arkansas convenience stores, tobacco and vape shops and elsewhere, and is produced and sold entirely free of regulation.

Most commonly known as delta-8 THC, but also sold in a seemingly ever-expanding array of other varieties — THC-0, delta-10, HHC — the products come in a range of forms: vape cartridges, gummies, tinctures, cookies. How delta-8 compares to marijuana depends on whom you ask, but the unscientific consensus is that they’re at least intoxicating cousins.

The crucial distinction between the two is a legal one. Marijuana is another name for the flowers of the Cannabis sativa and Cannabis indica plants that are rich in THC, technically known as delta-9-tetrahydrocannabinol. Delta-9 THC remains federally illegal and legal in Arkansas only to certified medical marijuana patients. Hemp, at least defined by the 2018 federal Farm Bill, is any cannabis plant or its byproducts that contain less than 0.3% delta-9 THC. Because delta-8 THC products meet that definition, they’re legal, goes the argument. Many state legislatures, including Arkansas’s in the 2021 legislative session, passed legislation to align local hemp laws with the Farm Bill.

Rep. David Hillman (R-Almyra) sponsored the bill that updated Arkansas’s hemp program. Delta-8 wasn’t on his radar at the time, he said. He’s not ready to concede that the law, passed overwhelmingly by his colleagues, legalized hemp-based THC products, but he acknowledged that the statute is at least ambiguous. “It’s something that’s going to have to be addressed” in a future legislative session, he said.

At least 17 states have banned delta-8 and similar products, but several of those are being challenged in court. The federal government hasn’t provided clear guidance. The Food and Drug Administration has warned that delta-8 hasn’t been evaluated or approved by the agency and may not be safe to use. The Drug Enforcement Agency, in an interim rule, said that delta-8 is not a controlled substance as long as the product is derived from hemp rather than synthetically or chemically synthesized THC. But the DEA did not define what “synthetic” means.

The typical way to make delta-8 is by extracting cannabidiol, aka CBD, from hemp, refining that into an isolate and then synthesizing that with heat and solvents into delta-8. In other words, chemistry! (HHC is created by adding hydrogen molecules to delta-9 or CBD; the hydrogenation process is similar to how vegetable oil is converted into margarine, the popular cannabis website Leafly helpfully explains). Whether that process runs afoul of the DEA’s stipulations depends on whom you ask. In any case, the federal enforcement agency has not aggressively targeted delta-8 manufacturers across the country.

In Arkansas, the state government’s novel strategy to deal with the new intoxicant appears to entail sowing confusion in hopes of tamping down its availability. The only rule the Arkansas Alcoholic Beverage Control, the agency that oversees the state’s medical marijuana program, has in place regarding delta-8 is one that prohibits its sales in medical marijuana dispensaries. Otherwise, the state regulatory bodies that oversee all products similar to delta-8 have decided to sit this one out. “The Arkansas Alcoholic Beverage Control Division and the Division of Tobacco Control have not taken a position at this time on the legality of possessing Delta-8 in a permitted premise,” spokesman Scott Hardin said in a statement. “The Divisions believe this is a matter better left to the discretion of local law enforcement and prosecutors. ABC and ATC remain committed to enforcing the existing rules governing their respective permit holders across the state.”

If the goal is to constrain the market, it’s working, at least to some degree. Mark Roberts, owner of Little Rock’s Heights Apothecary & Hemp Co., said he’s not selling delta-8 or related products until the law is more defined.

In February, the Camden Police Department charged the owners of two smoke shops with multiple felonies for selling delta-8 products. The cases haven’t gone to trial. Otherwise, the issue doesn’t appear to have gained much traction among local law enforcement. Bob McMahan, the state prosecutor coordinator who supervises a staff of lawyers who research legal issues for local prosecutors, said the legality of delta-8 hadn’t bubbled up to his staff. Sgt. Eric Barnes, a spokesman for the Little Rock Police Department, said to his knowledge no citations related to delta-8 had been issued in Arkansas’s largest city.

In a market flooded with hemp, the barrier to entry in the delta-8 business is low. If a fly-by-night operator wanted to set up shop, delta-8 distillate in bulk is widely available on the internet. But there are big, legitimate players as well, including at least two with Arkansas connections that are using their influence and reputation to gain a toehold in the market.

Blonc CBD, a Little Rock-based brand, produces gummies and tinctures, which it sells at blonccbd.com and in a growing number of retail locations in the state, according to co-owner Keith Emis, a longtime Republican lobbyist.

“We’re a brand-new product in the market,” Emis said. “Every month, we see growth in sales from the previous month. We comply with all state and federal laws and regulations, and we’re committed to being a responsible corporate citizen.”

Among Emis’ partners is Jason Polk of Lake Liquor in Maumelle. Polk previously co-owned Rebel Kettle Brewery, and his family by marriage contributed nearly $500,000 toward the successful effort to pass Arkansas’s medical marijuana amendment. Emis declined to name other partners, but circumstantial evidence suggests that they include Jackson Stephens III, grandson of famed Little Rock financier Jack T. Stephens. Blonc shares a mailing address with another business associated with Stephens and was also associated with Naturalis Health LLC, Stephens’ unsuccessful bid to get one of the state’s medical marijuana cultivation permits.

Ouachita Farms, until recently based in Garland County, was one the first companies in the state licensed to grow and process hemp. It relocated to Texarkana, Texas, last June and has expanded operations into Texas, where it operates a sister brand called Brazos Farm, and New Mexico, where it owns Enchanted Farms, a marjiuana cultivation operation. Marijuana became legal for adult use in New Mexico April 1.

Sarah Owen, CEO of Ouachita Farms, said her company focuses on solventless extraction with its delta-8 products. “We rely on trusted suppliers who have a proprietary process that they produce delta-8 distillate with. We bring that distillate in-house. Then we’re going to a DEA-certified lab to test for heavy metals, for solvents, for pesticide and potency.”

Ouachita Farms’ delta-8 products, which it sells as brownies, cookies, dab sauces, gummies and in tinctures, are among its top sellers, Owen said. They’re available at ouachitafarms.com or in retail locations throughout the country. Last year, Ouachita Farms sold its products in 40 states, Owen said.

“We want our cousins in the cannabis industry, the hemp folks, to do fine, but we need some standards to ensure safety and policy that’s clear,” said Bill Paschall, spokesman for the Arkansas Cannabis Industry Association. “There’s no clarity of policy at the state level or the federal level. A lot of folks out there are wandering around the woods in a state of confusion.” Many delta-8 products carry a 21+ label, and Emis with Blonc and Owen with Ouachita Farms both said they would cease supplying any retailer who they learned sold their products to anyone younger, but there’s no law preventing a teenager from buying delta-8 THC gummies at a convenience store. There also aren’t any requirements for labeling or testing, Paschall noted.

“I think it’s going to have to be resolved in the legislature,” Paschall said. It appears to be entering lawmakers’ radar. At an April 20 meeting of the Arkansas Legislative Council’s Administrative Rules Subcommittee, Sen. Missy Irvin (R-Mountain View) told Department of Health representatives she had concerns about a “substance.” The health department official told her that the department could make an emergency rule to add a drug to the state’s schedule of controlled substances. Meanwhile, there’s talk of Governor Hutchinson calling a special session this summer to provide a one-time tax cut, rebate or credit to ease the burden of inflation. If that comes to pass, lobbyists and legislators would likely jockey to get a delta-8 ban on the call — or leave it off.

Does Delta 8 THC Get You High?