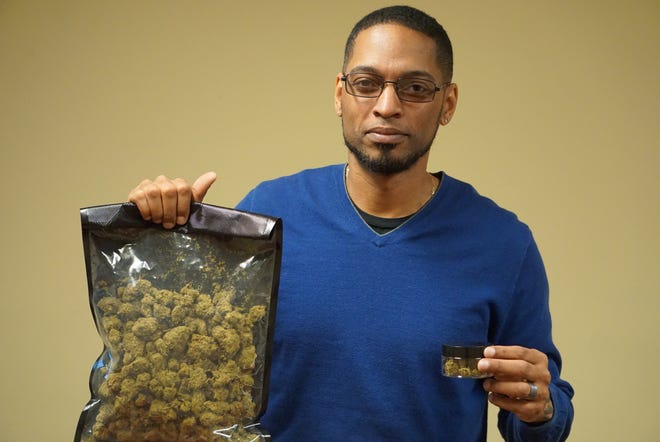 As Tyrrel Walker opens a sealed plastic bag of green hemp buds, an unmistakably cannabis-like smell fills the air. It looks and smells like the real thing.

But Walker doesn’t have to hide his business, because it’s delta-8. And in North Carolina, where recreational marijuana use is prohibited and a bill to legalize medical marijuana remains languishing in the state senate, this cannabis-like product is legal to anyone over 21 and is ready to hit the big time.

Walker owns Cannafay, which aims to bring North Carolina-grown delta-8 products to the Fayetteville area. They’re new — the company became a recognized LLC in mid-February — and for now are focusing on wholesale, business-to-business sales, with a focus on the food and restaurant industry.

What is delta-8? Delta-8 tetrahydrocannabinol (THC) is similar to delta-9 THC, the psychoactive compound in marijuana. In order to be legal in North Carolina, Walker’s products, and all other delta-8 products, must contain less than 0.3% delta-9 THC.

Delta-8 is not as potent as delta-9. Walker said that on average, his delta-8 products, which he called marijuana’s “kinder cousin,” are about half as strong as typical cannabis. While the euphoric “high” isn’t as strong, Walker said that potential negative side effects, such as paranoia or disorientation, are less with Delta-8 than regular cannabis.

Cannafay sells dozens of products, including 32 varieties of “flower” hemp. The finished product is made by growing different varieties of low-THC hemp and then treating it with a distillate that’s 96% pure delta-8 THC. Both the plants and the distillate are grown on a farm in Asheville that Cannafay partnered with for the operation, Walker said. Thanks to the 2018 Farm Bill that legalized hemp production, both the plant and distillate are legal to produce.

All the varieties are treated with the same amount of distillate, but some types are able to absorb more of the product, leading to varying levels of intensity, or what Walker likes to call, the “fun factor.” For example, the best-selling “Skywalker OG” scores around a mild 2 on the 1-10 scale, while “Platinum Kush” packs a bit more punch and rings in around a 6.

Delta-8 on the menu

Cannafay is now targeting cooks, as well as restaurant and bakery owners, looking to add “infused” items to their menus. For culinary uses, Walker recommends using the distillate. It’s not cheap — Cannafay sells liters for $1,800 — but a little bit goes a long way. A single milliliter, or one gram, is enough for most recipes, Walker said.

The distillate, which is tasteless and aside from a slight amber tinge, nearly colorless, is solid at room temperature. To use it, it must be gently warmed in hot water. The distillate itself is then added to carrier oil, such as olive or canola oil, to ensure even distribution throughout the final product.

“We don’t have to do this underground anymore,” Walker said.

Along with the flower and distillate, Cannafay plans to offer gummies, vapes, tinctures and other products in the future. Smaller packages of the delta-8 distillate, including single-use syringes, are also in the works.

The company is in its early stages, which is why Walker said that at this point, educating consumers is the most important thing.

For now, that is. Delta-8 is currently banned or restricted in 20 states, including some states, such as Colorado, New York and Nevada, where recreational marijuana use is legal.

More:NC Answers: When do the Cherokee plan to start medical marijuana sales in North Carolina?

Naturally, Walker hopes it stays legal, but his eyes are on the future. If and when North Carolina makes recreational marijuana legal, he wants Cannafay to have the infrastructure and expertise to make the next step.

“We’re pioneers in this area for this industry,” Walker said.

Flight from hemp continues in U.S., with harvest expected to fall by nearly half

What Is The Difference Between Delta 8 THC and Delta 9 THC?