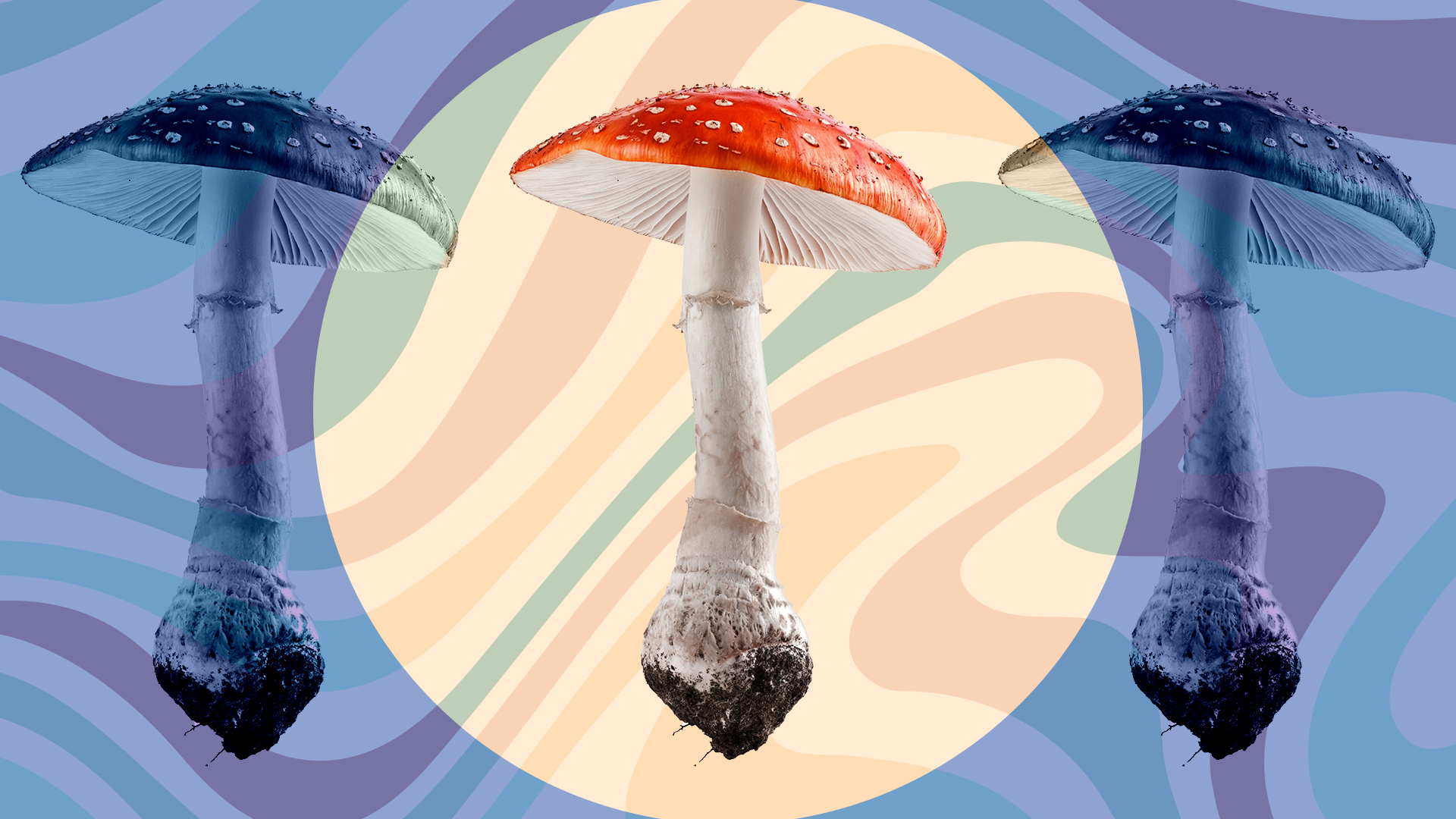 Editor’s note: Do not ingest untreated amanita muscaria (fly agaric) mushrooms. They are considered poisonous to humans in their raw state.

As cities and states vote to decriminalize entheogens at a rapid clip, the vast majority of Americans still lack access to legal psychoactive mushrooms.

Recently, however, a novel market has emerged to satiate consumers with a product that—for the time being—remains federally legal.

The mushroom species amanita muscaria—also known as fly agaric—contains the psychoactive compounds muscimol (pronounced “musk-a-mall”) and trace amounts of another compound called muscarine. But since it doesn’t contain any psilocybin, it stands outside state and federal laws that otherwise criminalize magic mushrooms.

Legal because it lacks psilocybin

“For whatever reason, amanita are not illegal. A lot of people are utilizing amanita for microdosing and having entheogenic experiences on higher doses,” the prominent mycologist William Padilla-Brown told Leafly.

Read on to learn more about the mushroom’s fascinating history, as well as information on safe dosage, how it differs from psilocybin, and its effects.

Amanita muscaria typically grows in conifer forests, most commonly in Lithuania and Siberia. Bright red, and bearing an uncanny resemblance to the iconic Mario Brothers mushroom, it’s hard to miss.

While a commercial market for amanita muscaria only emerged recently, the species boasts a long history of religious and spiritual use, especially among indigenous peoples—including the Saami—in current-day Scandinavia.

In fact, some experts contend that amanita muscaria played a role in the development of Christmas.

Is that you, Santa Claus?

“Shamans would collect these mushrooms and dry them out in their huts. When food shortage season was coming, they’d travel around and offer this psychedelic brew as a gift,” James McConchie told Leafly. McConchie is an educator and advocate, as well as the owner of San Francisco’s Haight Street Shroom Shop and a co-founder of Decrim SF.

Those shamans, McConchie said, may have served as the prototype image of Santa Claus.

Padilla-Brown further noted that early consumers would dry their mushrooms on trees—resembling ornaments on a Christmas tree—and would wear red and white in imitation of the mushrooms.

Yet there was a complication that early consumers had to navigate: Amanita muscaria are poisonous. Eaten without first properly boiling and drying them can result in muscle failure and even death, although few mortalities have occurred since the advent of modern medicine.

How to forage for magic mushrooms

Sure, I’d drink that…

Fortunately, indigenous consumers in Siberia found a remarkable way to detoxify the mushrooms. They fed the amanita to reindeer, who in turn broke down the fruit and subsequently expelled hallucinogenic muscimol-rich urine, which they drank.

According to one 18th-century report, individuals could “recycle” the mushrooms up to five times by drinking their own urine. Bon appetit.

Although amanita bears a significant resemblance to magic mushrooms, experts stress the differences between them, both in terms of their chemical makeup and their psychoactive effects.

Amanita contains the psychoactive compounds muscimol and muscarine, as well as ibotenic acid, which gets converted to muscimol both during the drying process and when the body digests it.

Padilla-Brown, the mycologist, pointed out that “muscimol and all the compounds attributed to the intoxicating effects of amanita muscaria…don’t act on the same receptors as classical psychedelics.”

While psilocybin interacts with serotonin receptors, muscimol gets picked up by GABA receptors, which also interact with barbiturates and benzodiazepine.

Experts maintain that amanita tends to elicit less hallucinatory effects than the psilocybin and psilocin in other entheogenic mushrooms.

“[Amanita muscaria] chills you out,” said McConchie, who further compared its effects to ketamine. “In low levels, it’s not a numbing agent per se, but it’s like an anesthetic a little bit. When you get into higher doses of it, you can get into a stupor or drowsiness.”

McConchie added that amanita muscaria can serve as a “really powerful tool for people that are dealing with anxiety, depression and PTSD. Sometimes psychedelic experiences scare them a little bit.”

Drew Gennuso is the CEO of Psilo Mart, a prominent online retailer whose products additionally sit on Chillum’s shelves in Tampa. He compared the effects of amanita muscaria to an Indica strain of cannabis.

“It’s going to produce a very nice body feeling. You usually don’t get visuals [with smaller doses],” he told Leafly.

Dosing is much different than psilocybin

“We’re trying to formulate that to be somewhat equivalent to the effects of 100mg of psilocybin,” Gennuso said. “At the moment, that’s somewhat the rough idea of a microdose.”

Other sources advise a much smaller dose, of around 10 milligrams. But that figure refers to pure muscimol, versus the mushroom extract found in consumer-facing capsules.

A number of experts compared amanita’s legal status to that of delta-8 THC, the pseudo-legal analog of THC derived from hemp. Both offer a loophole of sorts around prohibition, and both can be shipped around the country (although some states have banned delta-8 THC).

“Coming from the hemp landscape, you have to be sensitive to that,” he told Leafly.

“There eventually will be bad actors that don’t want to spend money to get COA’s [Certificate of Analysis] or vet their suppliers. That’s usually what invites potential regulation. We’re prepared for that. We’re mindful of that,” he added.

McConchie, for one, stressed the importance of harvesting amanita responsibly. “We can’t grow them in cultivation,” he pointed out. “Cut and leave the butt, don’t be pulling your mushrooms out of the ground. Leave the mycelium connection so more mushrooms can grow,” he advised.

As such, the future of amanita muscaria—its legality, its availability—is far from certain.

Max Savage Levenson likely has the lowest cannabis tolerance of any writer on the cannabis beat. He also writes about music for Pitchfork, Bandcamp and other bespectacled folk. He co-hosts The Hash podcast. His dream interview is Tyler the Creator.

The latest in Strains & products

By submitting this form, you will be subscribed to news and promotional emails from Leafly and you agree to Leafly’s Terms of Service and Privacy Policy. You can unsubscribe from Leafly email messages anytime.