Flight from hemp continues in U.S., with harvest expected to fall by nearly half | Turn 420 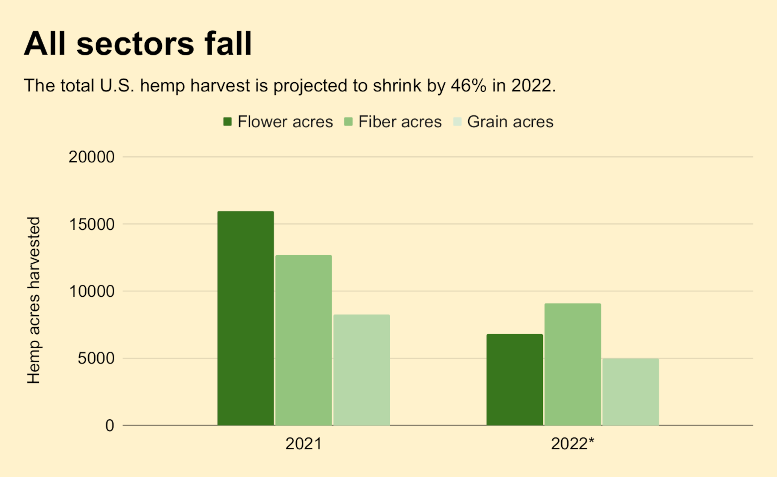 The 2022 hemp harvest in the U.S. is expected to shrink by nearly half this year, falling from roughly 36,925 acres in 2021 to about 20,000 acres as all outputs are in decline, according to government figures and projections from Denver-based analyst PanXchange.

PanXchange projects the 2022 flower harvest at 6,400-6,800 acres, expects the fiber harvest will range from just 8,200-9,100 acres, and estimates grain will be brought in from as few as 4,800 to 5,000 acres this year. That would mean roughly a 46% drop in harvested acres in 2022 based on comparative figures in the first-ever hemp crop report from the U.S. Department of Agriculture’s National Agricultural Statistics Service (NASS) carried out for the 2021 harvest season.

The discouraging numbers follow a disturbing trend that started in 2019, when U.S. farmers planted about 500,000 acres but harvested only 120,000 as a worldwide crash in the CBD market took hold. Since that time, prices for CBD biomass have plunged from historical highs by as much as 90%, sparking a stampede out of the sector that has dragged down industrial hemp overall.

MORE ABOUT THE U.S. HEMP CRASH:

With CBD gold rush over, U.S. Hemp is but a shadow of its former self
Charlatans, bureaucracy, and mismanagement brought U.S. Hemp down to earth
Ahead for the industry: Fiber and food, sure, but hemp will be relegated to a ‘specialty crop’

“Poor conditions and contract prices have resulted in poor follow-through,” Seth Boone, Vice President for Business Development at PanXchange said of this year’s expected flower production for CBD and other cannabinoids.

Meanwhile, other hemp subsectors can be described as moribund.

“Grain had the most success for repeat acreage with experienced growers, but struggled to find new growers in many areas,” Boone noted, with plantings down about 40% vs. NASS figures for the 2021 harvest. Compared to the NASS report’s estimate that 15,980 acres were harvested for hemp flowers last year, this year’s dropoff means a 68% reduction in flower fields.

And while much noise has been made about the potential of hemp fiber, PanXchange’s top-end 2022 projection of 9,100 acres harvested for bast fiber and hurd would mean a drop of 30% from the roughly 12,700 acres harvested in 2021, as reported by NASS.

The U.S. Hemp Industries Association, while touting the prospects for fiber, nonetheless noted in a recent newsletter that “markets for hemp biomass or hurd are not yet robust enough to power fiber hemp’s development as an industrial commodity.”

Boone said the fiber sector faced difficult planting and growing conditions this year, and competition from traditional crops that are bringing higher prices, but said there is reason for optimism.

“In all, the decreased acreage (for fiber) should not be discouraging as there is still significant buyer interest and processing capacity is expected to significantly increase through 2023. Once supply chains are more developed, acreage will have a much bigger impact on market sentiment,” according to Boone.

Looking for a savior

Amid the drastically diminished fortunes of the CBD sector, producers are turning to delta-8 THC. PanXchange estimated that at least 75% of all hemp extract is going into production of psychoactive delta-8 products, which are turned out through a synthetic process based on hemp-derived CBD.

Desperate producers are working a loophole in the 2018 Farm Bill – which never intended for hemp derivatives to be used for psychoactive products – to address a market that is questionable going forward. The compound has been banned in some states, is being treated under restrictions for marijuana-based delta-9 THC products in others, and has drawn warnings from the U.S. Food & Drug Administration (FDA). Plus, the 2023 U.S. Farm Bill is likely to address the delta-8 loophole, further diminishing its prospects.

Meanwhile, CBD for direct human consumption, which has yet to receive serious consideration from the U.S. Food & Drug Administration, remains in a legal gray area in many parts of the country, and product quality and safety are serious questions.

And while projections hold that grain will grow to be the biggest hemp sub-sector over the next few years, U.S. hemp farmers have yet to seriously address that opportunity, having long ago ceded the market to Canada, which grows around 80,000 acres of grain hemp annually, most of which is supplied to the U.S. Grain hemp makes up about 80% of total Canadian hemp sales.