Delta-8-THC is widely available in Evansville. Here's what to know | Turn 420 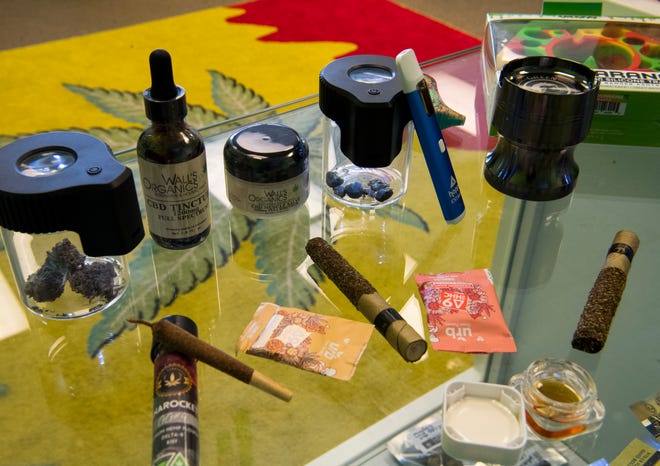 EVANSVILLE, Ind. — Marijuana may still be illegal in Indiana, but that hasn’t stopped local businesses from cashing in on the multi-billion dollar cannabis industry.

A new class of hemp-based products purport to offer users the same high and medical benefits as illegal marijuana but without the potential legal risks –– and these products are all over Evansville.

Without making the drive to Illinois, where marijuana is legal, Evansville residents have access to a plethora of federally legal cannabis compounds, such as Delta-8-THC, which researchers say is psychoactive and produces a high similar to illegal marijuana.

Proponents say the products, which can be purchased at specialized shops and convenience stores, offer a lifeline to Hoosiers who could benefit from cannabis medical treatment.

However, the U.S. Food and Drug Administration has not approved the vast majority of hemp-based treatments being sold, and the agency issued a warning in February about potentially tainted products.

Thanks to a law passed by Congress in 2018, large-scale hemp production became legal, and so did compounds extracted from the plant, such as Delta-8-THC, which differs only slightly from the primary psychoactive drug in marijuana, Delta-9-THC.

Cannabidiol, better known as CBD, was also legalized federally by the 2018 bill. CBD will not typically trigger a positive result on an employer drug test, but Delta-8-THC can.

Business owners and cannabis advocates say these hemp products satisfy a clear and present market need in Indiana, but it’s unclear how the state Legislature and local law enforcement will respond in the years to come.

The hemp business is booming in Indiana

Wall’s Organics is an Evansville-based dispensary that offers a range of hemp products, including Delta-8-THC and CBD. The compounds can be smoked, vaporized, eaten or applied to the skin.

“These products have been life-changing for people,” the business’ owner, Matt Wall, said. “Everything is tested to ensure it contains less than 0.3% Delta-9-THC.”

After the passage of the 2018 farm bill, hemp producers quickly learned how to extract and synthetically produce a plethora of psychoactive compounds from the plant, such as CBD and Delta-8-THC –– and these products are federally legal so long as they are less than 0.3% Delta-9-THC by weight.

Wall said he got his start in the cannabis industry in Colorado, where marijuana has been legal since 2012. When the 2018 farm bill legalized hemp-derived products, Wall decided to return to Evansville to open his first shop.

“There really was no one here doing it right at that time,” Wall said. “People were selling poorly manufactured products, and I could come in with the experience from Colorado to offer something better.”

Frank Lloyd – a board member at Indiana’s chapter of the National Organization for the Reform of Marijuana Laws, or NORML – said Delta-8-THC and other hemp products have wide appeal due to their “milder” experience.

In states with legal marijuana, dispensaries often compete to have the most potent products, Lloyd said, and these powerful cannabis strains can be too strong for many people.

“(Delta-8-THC) kind of gave people who didn’t really want to do a full-on cannabis experience an intro without some of the negative effects of strong cannabis,” Lloyd said. “You don’t have to go for one with super-high THC, you can kind of figure out what level you want to be on.”

Lloyd has owned East Tree Dispensary in Indianapolis since 2019, and said participating in Indiana’s burgeoning hemp industry has been “a positive experience” despite many roadblocks.

One such hurdle is the need to constantly prepare for any changes to state or federal regulations.

“They could completely outlaw all this stuff if they wanted to,” Lloyd said.

East Tree Dispensary’s customers use CBD, Delta-8-THC and other hemp products to treat a variety of ailments, including pain, anxiety, post-traumatic stress disorder and cancer-related nausea and depression.

“Pain and anxiety are definitely the top two,” Lloyd said. “I’ve also had people come in with addiction who use Delta-8-THC because it reduces cravings.”

East Tree Dispensary grows and purchases hemp plants that are locally produced in Indiana. Delta-8-THC can either be extracted directly from the hemp flower, or it can be synthetically produced using hemp-extracted CBD as the base ingredient.

The U.S. Food and Drug Administration has issued warnings about Delta-8-THC products and their potential to contain harmful contaminants left over from the volatile extraction process.

In February, the FDA said it had received more than 100 reports of adverse reactions to the drug.

But both Lloyd and Wall said that testing each product for purity and potency is a core component of the modern cannabis industry. Commercial laboratories increasingly offer a range of cannabis testing services for businesses.

“Labs are extremely important,” Lloyd said. “You want to be able to show exactly what you’re getting, and that helps end the stigma and builds trust. We make sure there are no metals, alkaloids or any other chemical contaminants.”

Researchers first synthesized Delta-8-THC in 1965, and the compound had been studied at universities throughout the United States and other countries in the years since.

A recent study published in the Journal of Cannabis Research found that Delta-8-THC was less potent than Delta-9-THC but still produced similar effects.

The only chemical difference between Delta-8-THC and Delta-9-THC is the position of two carbon atoms. Researchers say the altered structure makes Delta-8-THC less capable of binding with cannabinoid receptors in the brain, which accounts for the drug’s reduced potency.

Despite decades of research into the compound, the FDA has not approved any Delta-8-THC products to treat medical conditions.

But Delta 8 isn’t the only hemp-based compound lining store shelves in Evansville. CBD has exploded in popularity since 2018, and the non-psychoactive drug can be purchased at retail pharmacies such as CVS and Walgreens.

Years of research has shown that CBD is a powerful anti-inflammatory agent that can treat pain and reduce the severity of seizures, especially in children who fail to respond to traditional anti-convulsants.

The FDA has approved drugs containing CBD, such as Epidiolex, to treat seizures.

Delta-9-THC, despite being federally illegal, is also the primary ingredient in the FDA-approved drug Marinol. The drug manufacturer says Marinol is approved to treat cancer-related nausea and pain.

Delta-8-THC potentially offers similar medical benefits to Marinol, according to researchers, and likely has a reduced side effect profile due to its milder effects.

But, doctors and the FDA have cautioned potential users about taking unregulated, cheaply produced hemp-based products.

A tricky situation for police, legislatures

Cannabis market analysts project that Delta-8-THC, CBD and other hemp products will continue to grow in popularity over the coming years. Studies have shown an increased interest for the compounds in states such as Indiana, where marijuana remains illegal for all use cases.

But that growth could be shutdown in an instant if legislatures and regulators act to ban  Delta-8-THC  — and in Indiana, legislators have already tried to do just that.

According to Young, the bill died due to concerns that it would also potentially outlaw CBD treatments. But, there is support among some Republican officials to retry outlawing Delta-8-THC in 2023.

Another factor complicating the Delta-8-THC market is the fact that law enforcement has few ways to distinguish legal hemp products from illegal marijuana products.

The Evansville Police Department did not provide the Courier & Press with specific policies relating to Delta-8-THC. Lloyd said NORML has urged law enforcement agencies to buy new drug testing machines that can distinguish between Delta-8-THC and Delta-9-THC.

“My personal opinion is that I’ve never heard of a person getting arrested in Indiana for having a (Delta-8-THC) cartridge, an edible or even a concentrate,” Lloyd said. “But you can absolutely fail a drug test.”

Still, for many Hoosiers, the potential benefits of using Delta-8-THC could outweigh the risks. And, if market dynamics are any indicator, thousands of people in Evansville believe those risks are well worth it.